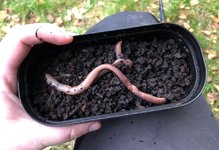 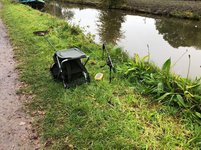 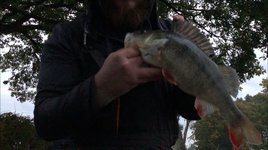 Macclesfield Canal - arrived at 12:30'ish, started on the Wide Hole(WAA card) and then moved onto the canal stretch due to no action / getting nibbled by smaller fish - mind you, I would have appreciated a take but didn't land anything.

...it was at around 17:00 when the Delkim screamed and the bobbin stayed up - I thought I'd hooked the bottom and then I got a glimpse the fish - not quite break the surface before... it came off, I thought it might have been a carp, but from the way it felt I was shaken and sick at the thought that it could have been a big BIG Perch -
...then it happened again, this time I seen the stripes, it came off!!! And I also missed a couple of takes, it was around 18:00 and these were not small Perch in my swim, I was excited but feeling anxious as daylight dwindled.

Then it happened, weighed in a disposable carrier bag, no landing net zero'ing / potential mistakes this time, that's a 2lbs 2oz Perch.
Anybody who knows of me on here knows how much effort I've been putting into these fish, absolutely over the moon.
Last edited: Saturday at 9:23 PM
S

Well done mate good reward for your efforts, now for the 3 pounder

Not quite sure on the way you're holding it though, it might be better to support it from both ends

Not quite sure on the way you're holding it though, it might be better to support it from both ends
Click to expand...

Yeah fair enough it's funny you should say - I had him up like that for 3-4 seconds and absolutely felt that he was a bit too heavy for it, anyway pic done and back in the drink right as rain.
I'm not used to catching the biguns!

Hopefully you'll catch some more for the practice
D

Lovely fish, but as Dave has said, handle with care and respect, both perch and pike are quite fragile creatures, just don’t tell their prey!

The Bridgewater Canal shocks me with a reason to keep on trying...
2