(or "Fun with Virgin Mobile")

About 10 days ago Virgin Media texted me to advise me that in order for my phone to work properly on The Isle of Man or somesuch place, they would be sending me a new SIM card. Well about a week ago said card arrived and I followed the instructions to swap SIMs. Unfortunately the new SIM decided it wasn't going to register. So after a few goes I get on the phone to Virgin Mobile where after a not insignificant period of security questioning, followed by some "are you an idiot" questioning, she finally decided to send me another new SIM.

While waiting for the new SIM to arrive I bit the bullet and shelled out for a new phone. At thirty quid it cost twice what I paid for the old one!

The new SIM arrived today. Again I followed instructions to the letter. But ended up having my PIN code locked. It was then asking for my PUK code, so I looked up the number on their website and gave them a call: "I'm sorry. But we are experiencing technical difficulties. Please call back later."

Hmm... I search around the web and find that I can get my PUK code online. But I have to first register for a Virgin Mobile online account. Another "20 mins of my life that I'll never get back" later, and I have my PUK code. Bung it in the phone and it then asked me for a new PIN code. PIN code entered ..... BEEP Code Error .....Enter your PUK Code. You have 9 tries left. 6 tries later, having used every possible combination of what I thought might be the PIN code and I am now still getting the error and have 3 tries left.

So I phone Virgin again - They are still sorry.

So I phone the Virgin shop in town and they gave me a different tech support number which I got through on almost immediately. After the same bunch of security questions, another nice lady there investigated and found that my new SIM had apparently not been registered yet. (probably because it wouldn't work!) So the PUK code I got from my new Virgin Mobile online account was for my OLD SIM card and was duly refused when I used it on my new SIM.

A few "take it out", "put it back in", and "Press this that and the other" s and Presto ! I now have a working phone that will now actually work in The Isle of Man.

How was your day ?

When are you off to the Isle of Man?

After all that messing about, I'd cancel the Isle of Man thinking that the Isle may be closed due to a booking error.

This is called progress laddie, get used to it! 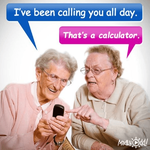 At first I thought you had a camera in my house. But then I realised they have more teeth than me!

muskrat said:
At first I thought you had a camera in my house. But then I realised they have more teeth than me!
Click to expand...

Glad to hear you're embracing your cross-dressing side. Kudos to you.