So, the xmas outings, which have severely hampered by the obvious in terms of where, but also plans adapted and further restricted by flooding to the local river and lakes.

Have enjoyed some decent pole fishing on a couple of commercials and putting together a few fish, with a set up largely for silvers, but with winter carp in mind, of which there have been a handful to stretch the elastic on typical maggot and also expander lines.

How different a year can be, as i reflect on last season, where i managed to get Barbelling at least once every calendar month to the Trent, the kit sits as eager as i do to be able to get there again and to say it is getting me down, would be an understatement, but have had some fishing nonetheless.

With such flexible plans needing to be in place, my decision to get my setups as grab and go have been one of the best things i have done and despite the far from ideal situations impacting on plans, they have been re-assurance that the effort was worth it.

As a result of all of this, i had built up a good few pints of maggot, which have been lovingly looked after over the last few days, so yesterday, seemed a good day, with the local river being somewhere near fishable, to put them to use, not in a tactical sense of course with the local river having zero clarity still, more an opportunity to not have wasted them. On went some garlic powder in the thought that smell over vision could add to my chances.

As i was getting myself ready, i mulled over just using the Barbel set up as it is, yes, there are Barbel in the Nene, but none i am aware of where i was heading, but summoning some optimism of 'you never know'. bolstered by the high water conditions, i perked up, then one of those moments, where cautiousness crept in, the end result being taking the Barbel gear, but knocking up some scaled down hooklengths on the bank for any Chub that may oblige, opting for 6lb on my usual 10lb Barbel main line, the colour in the water giving assurance that needing to scale down dramatically wouldn't be needed.

Convincing myself that my chosen peg ticked all the boxes for some winter chubbing, flow, slack, cover and structure, i got to it, whilst knowing that the success or failure of this session would hinge on whether or not the fish would be prepared to/able to navigate the flow, yet also be prepared to feed in such thickly coloured water, the chill in the water was the latter of the cautionary factors, knowing that Chub can be keen in the more diverse of conditions. 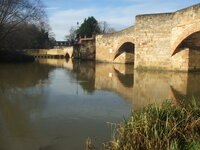 In the warmer months, the flows, slacks and features created by the bridge buttresses around the shallows, confirm that chub are abundant in the area and can be seen clearly, and to the right and on the opposite side of the bridge and in high water conditions, a generous bay offers sanctuary. My hope was that with the level having dropped somewhat, the fish may be starting to venture forth after many days in that sanctuary and although i felt i could be better fishing the other side of the bridge to access the slacks behind the butteresses, my lack of knowledge as to fishing rights and the validity of 'no fishing' signs along that bank has always deterred me, despite the properties fronting it limits of ownership, stopping well short of the bankside.

To my left, the river comes down and the flow angles across out of a gentle near bank bend, before the bridge splits the flows and speeds it up. If nothing else, this is a good spot for studying what these features do to the water and with the water levels as they were, going from the near bank to the realistic limit of the swim across, two creases separate a rapid near bank flow, going into a steadier run, and then finally a back eddy, where the water forms another far bank sanctuary of a mooring bay.

The fascinating thing is how the upstream bend and then the bridge itself to combine to form these three different paces of water. Studying these flows, saw me opt for the central line, where i felt fish may be exploiting any food coming down in the mid flow, but with slow water to back off to and in my casts just a few yards upstream of the arch, hoping to temp them from their cover, whilst allowing them that cover by not intruding too far into it.

So, operation use up maggots began in earnest and when confident, i would use the term fishing positively in my selection of a large feeder, when needing to have not wasted the three pints i had accumulated however and knowing that the cold would kick in within a few hours, i have to say these were more my reasons for filling it in, but there is something reassuring in thinking that i was being tactical in a need for a good trail of bait! 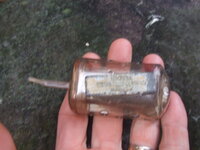 Far be it for me to be critical of tackle, usually preferring to be sure it's not my own errors in application first, but even when it comes to this iconic feeder, i have found on several occasions, that a good tip to ensure the lid stays shut, is to firstly ensure that the rubber sleeve on the neck is slid down fully on filling and sometimes that a sliver of tape around the rim where the lid joins, ensures a more reliable fit for the lid, too many times i have retrieved them to find the lid lifted, which is a worry you don't need usually, but lesser i suppose today where the aim of the session is clear!

Putting my disregard for ensuring things i could control were bang on today, to one side, i did of course need the feeder to be doing its job though, along with a steady trickle of catapulted maggots well upstream each put in and a few down, in the attempt to try and draw some fish up or in, the up or in aspect suggesting i couldn't be 100% sure just where any fish were residing given their options in this area, needing to of course maintain the confidence that they haven't ventured far from this rich habitat provided in normal conditions. To give an indication of the extreme conditions for this river, that is a further 20g (3/4oz) lead added to the top.


Mid session i opted to put up a second rod and with a lead i could use to explore nearer to the bridge and downstream of my feeder rig, smaller hook and just the double maggot for this one in addition to the rubber one i usually use in these situations, today it was clear the rubber maggot wasn't going to combat any nuisance fish, no fish would be a nuisance today, more, and more in keeping with what i feel they achieve overall, is a bit of buoyancy to combat a heavy gauge hook.

Going back to my set up and a thought if the 1.75 tops on the rods were too much, diminished as the session went on, with the hookbaits not seeing a touch throughout and further thoughts that the tops do detect the attentions of sub 1lb fish on the rivers i usually am able to employ them on, the only need for changing the hookbaits was due to the effect the cold water had on what were healthy baits on hooking them.

Between maintaining regular casts of the feeder and the odd repositioning of the lead rod, flirting nearer and nearer to the issues that the areas around bridge foundations bring, i observed more debris coming down and contemplated life, work and the increasing cold in the hands and fingers. I had got through over half of the maggots and the remainder were put out to perhaps eventually find their way to some grateful fish in need of some food, the thought of which, in the form of home made soup and crusty bread was where my attention then went to.

Wonderfully written as per!

Thanks Chris being 'riverlocked' for the time being I enjoyed reading that. I like how you detailed the areas of the river and covered the options available.
Just a thought, but is it worth an enquiry to the Environment Agency or local council covering the stretch of river upstream of the bridge tell you whether the no fishing signs were actually placed there by the landowner.

Nice write up mate, that looks like a beautiful place to fish.
D

And to you mate, yes hopefully a match or two.

SeanB said:
Nice write up mate, that looks like a beautiful place to fish.
Click to expand...

Cheers, yes it is, the irony of it all is that it takes my favoured rivers not being accessible for me to fish it.

Scribe said:
Thanks Chris being 'riverlocked' for the time being I enjoyed reading that. I like how you detailed the areas of the river and covered the options available.
Just a thought, but is it worth an enquiry to the Environment Agency or local council covering the stretch of river upstream of the bridge tell you whether the no fishing signs were actually placed there by the landowner.
Click to expand...

Cheers Kev. If the options remain limited i may take a look into it.
Glad you enjoyed it.

Neville Park - oh how I have missed thee, gem of a free water