Zerkalo said:
The English version of Aguirre is on YouTube, anyone seen it? 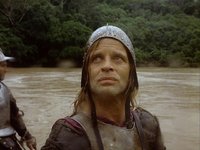 Aguirre! I was obsessed with this for so long! But definitely watch the English Dub to get the most out of it in my opinion.
Click to expand...

Wow, never knew there was an english language version of this out there. It's also one of my favourite films of all time, not like any other film, a true journey into madness. Thanks for the link, English dub makes it easier to recommend to people!
I see you also mentioned Fitzcarraldo and it is the Herzog film most compared to Aguirre but for me the other great Herzog masterpiece is The Enigma of Kasper Hauser if you haven't seen that....

I can't stomach dubbing the only exception being Sergio Leone's works, he gets a pass, with subtitles there's the bonus that you watch enough you start picking up bit's of the lingo, you can often re watch countless times and see something new each time.

Whilst not techinically a foreign film the greatest comic book film IMO - Flash Gordon, Sam J Jones was dubbed after he fell out with De Laurentis, it was dubbed English over English well though.

Delicatessen would be my pick for foreign film, full of fun that one.

The wave of king fu films in the 70's had the best dubbing. Someone's mouth would be contorting, like a Russian gymnast, for 20 seconds and out would come.........."hello"

cwebb4 said:
Wow, never knew there was an english language version of this out there. It's also one of my favourite films of all time, not like any other film, a true journey into madness. Thanks for the link, English dub makes it easier to recommend to people!
I see you also mentioned Fitzcarraldo and it is the Herzog film most compared to Aguirre but for me the other great Herzog masterpiece is The Enigma of Kasper Hauser if you haven't seen that....
Click to expand...

Good to speak to someone else who appreciates Werner Herzog. I was fanatical about him for a while so ended up watching pretty much every film he did but you're right that Aguirre is a very special film. I'd go as far as saying all his 70s films are masterpieces. And he's a bit of a character in interviews too so the more I watched or read him the funnier I found him. I have a few of his books too. Herzog on Herzog, Of Walking in Ice, and Conquest of the Useless which I rate up there with the actual film Fitzcarraldo.

Dubbing is a personal choice I guess but that was how I first watched Aguirre so it's how it stays with me. I'm the same with another 'art' film, Sans Soleil, I first watched that with english dubbing and then recommended it to a friend and we watched it with subtitles and it just didn't seem like the same film. There are probably loads of films I wouldn't watch dubbed but it does work for a few.
L

Ah dubbing I remember it well

Werner Herzog directed in my opinion thee best & most atmospheric Dracula film ever made, Klaus Kinski in Nosferatu the Vampyre....
took me years to find it on video (when video was a thing) only to discover a couple of years later it was also available on DVD
D

and I can't move on without mentioning a few others I love...
Seventh Seal
Train to Busan
Onibaba

and I'd be doing an injustice to my two younger kids who are both at collage doing film studies if I didn't mention their favourites...
City of God
Pan's Labyrinth
and anything Studio Ghibli

Parasite
Carnival of Souls
Battle Royale
Das Boot
Salo, 120 days of sodom (only for the shock value they were allowed to get away with releasing it)
B

I love all the Herzog films, but my favourite is Woyzeck. I recommend it if you haven't seen it.

The Micheal Haneke films are also pretty brutal but amazing. Funny Games and The Piano Teacher are the famous ones but I love the minimalist pessimism of Australia which is a lesser known one.

Another obvious director is Tarkovsky for Stalker especially.

Lars Von Trier stuff is good, though that is usually in English.

I dunno, I'm trying to remember some more obscure ones but it's been a while since I made an effort with cinema.

I'm named on here after a Tarkovsky film.

For me back when I did watch 'world' cinema the main film producing countries I liked were France, Germany, Italy, Japan and Russia with a few from Scandinavia and a lesser extent Spain.

Got to see other films from other countries back when MUBI forum ran 'world cups' where a pair of films would compete against each other for votes, but to me it became a bit of an obscurity contest, where lesser watched countries would get ratings simply because they weren't from the 'canonical' countries I mentioned.