20 anglers convened at social distance in the car park at 8am for the draw, which was made by the match organiser. We would be spread across both lakes.

Having had a couple of pleasure fishing sessions here over the winter, there were a couple of corner pegs on lake 1 that I fancied, and a couple of island pegs on lake 2, other than that both lakes are pretty featureless, with lake 2 being notably deeper (9-10feet) than lake 1 (5-6 feet) at 13m.

Both stocked with a decent head of carp and silvers, my preference was for lake 1 as during my previous sessions on lake 2 I’d been plagued by micro-Rudd.

The wind was ENE and quite cold, so I was more than pleased to draw peg 1, firstly as it was in lake 1, secondly because it was one of the corner pegs I wanted, thirdly because I would have the wind over my left shoulder blowing into this end of the lake, and lastly because it was less than 20 yards from the car park. 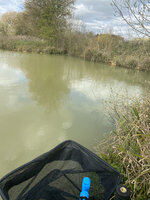 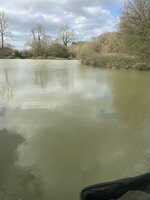 I set up a banjo feeder to fish close in to the bank on the bottom pic at about 25 yards, pole lines at 11m straight in front and at 10o’clock (5feet deep) and pole lines as close to the right bank as my 13m MTX1 would get me (about 3feet deep) and finally just off the reeds at 7m to my right, in about 2 1/2 feet) Slightly hampered by the tree, but confident I could manage.

Bait today was 4/6mm hard pellet, expanders, spam and Groundbait, with some sticky 4mm’s for the feeder line.

At the all-in I fed 4mm over the open water lines and the right bank line, and settled in. Rotated the 2 11m lines for the first 30 mins with no indications, aside from the guy opposite me in the other corner peg nothing had been caught on our lake. He had had a fish first bung but nothing else.

Switched to the 13m line to my right, fed some 4mm and went in with an expander. 2 small (1-2lb) carp and we were off and running. Stayed on this line for 90 minutes, wasn’t exactly bagging up but another half dozen fish made their way into the net.

The third and fourth hours were a bit of a non-event to be honest, rotating the 11m and 13m lines. 2missed bites and one lost fish being the only pole action. I did have a couple of small carp on the feeder, on a pink Ringers 8mm.

Things had definitely livened up around the lake, especially in the other corner to me, where every time I looked across he was playing a fish.

I fed the 7m reeds line and the 13m again, this time with Groundbait and either pellets or spam, a couple of minutes later I was wrestling with either a decent lump or a foul-hooker, 10 minutes later my fish of the day was staring up at me from the landing net, a beautiful 8lb common.

I spent the remainder of the match between these two lines, and picked of a few more fish. At the end I had 30lb on the clicker. In terms of the lake I knew the guy opposite had a lot more than that, the guy next to him probably had a bit more, but other than that I didn’t know/couldn’t see. As for the 10 anglers on lake 2 I had absolutely no idea.

Got packed up as quick as poss, and awaited the scales. Weighing in first, my catch registered 29lb 15oz, so my clicking is getting more accurate. I also managed to negotiate the emptying of the keepnet into the weigh-bag with slightly more aplomb than previous efforts, which was my second biggest positive from the day, beaten only by landing the 8lber earlier.

As per the distancing guidelines, no following of the scales so packed the car up and headed for home, results would be posted later on Facebook.

Went back for a few beers and to watch the seconds half of the League Cup Final, unfortunately my beloved Spurs were not destined to end a very long trophy drought, City by far the better team IMO.

Results posted shortly afterwards, as I thought I ended up 3rd on the lake, beaten by the two guys opposite with 44lb and a whopping 94lb. I also ended up 4th overall, narrowly missing my first frame by 8lb or so.

Got a couple of days off later this week so my plan is to get out on Thursday for a bit of casting practice, I’m still not 100% nailing it every time, so heading to a club lake with an island chuck for a few hours.

Friday I’m going to Rookery Waters to play around with shallow fishing and jigga rigs for a few hours, I’ve got a match there next Sunday and I know that shallow fishing is starting to come into play there.

A decent days fishing and I'm sure you will only get better through experience...

Brilliant effort Stew, well done mate. Like you, I also struggle emptying the keepnet into the weigh sling. Doesn't help having not much grip on my left hand though (chopsaw hand)
D