I will use this thread to report on a style of fishing I'm likely to do a lot of over winter as it's one of my favourite ways to fish when it's cold. As I figured today though, taking such a narrow, single method approach can be almost boom or bust. I probably could catch more if I set up a pole or waggler line as well, but that's pleasure fishing for you, the basic way I like to do it.

When I woke up this morning and had my morning coffee, I stepped outside and it was raining. This dampened my enthusiasm a little, but checking the forecast it said dry from 9 onwards, and sure enough when I arrived at Furnace Mill Fishery at 8.30 it was dry and the sun was out. I fancied a bit of a change so I chose to fish Mucky Meadow pool, a pool I had not fished before so didn't know what to expect, plonking myself on peg 44.

I set up a 20g cage feeder on my 10' Guru N-Gauge Feeder Rod (I will mention this rod in a review elsewhere but I was really impressed with it today) and a Daiwa Crossfire reel loaded with 4lb Maxima to an 0.14 Stroft hooklength tied to a size 16 Drennan Wide Gape Carp Hook. Groundbait for the day was Sonubaits F1 Sweet, not my usual choice, usually preferring darker F1 Green mixed down with an even darker groundbait at this time of year, but that's what I had. I mixed it 70/30 with fishery micro pellets and added half a pint of flouro pinkies to the mix. Hookbait to start with would be 3 red maggots.

I'd only just cast out at 9am, clipped up to around 25m, and was reaching for my flask when after about 20 seconds I got a positive bite and landed this small Carp. I thought I was in for a day of bagging. 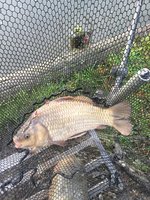 I usually fish Willow Pool and have had weights of over 100lb in the depths of winter fishing the deepest pegs on that pool that are about 7ft deep. This peg was an estimated 3.5ft so quite shallow in comparison. The tip went round again on the 3rd cast and another small Carp was in the net.

Then on the 4th cast a small Chub. 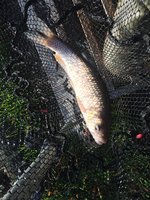 Quite a positive start, and it's always nice to get a variety of species. I had not caught a Chub on any of the other pools before. But then it went a bit quiet. 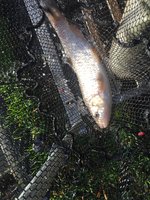 With it being quite slow I decided to downsize the cage feeder to a small 20g. And by 10.30 I had the almost obligatory decent Perch. It's part of why I love fishing here, that you catch big Perch and I'm sure one day I'll have a monster out of there but this wasn't bad at an estimated just under 2lb. 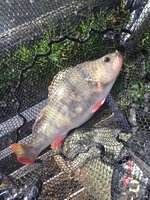 A switch to worm on the hook, a new hook to me, a size 14 Guru Kaizen, resulted in lots of pulls on the tip but it was 11.10 before I hooked another Ide. 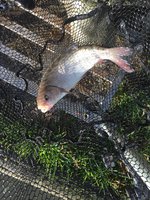 I wanted to sit it out on worm for a while, as I think it catches interesting fish, a nice big slab of a Bream would have been very welcome and they run to a good size in there apparently. But it was 11.45 before I had a fish, a small Crucian on half a dendrobena. Not the target really, but welcome nonetheless. 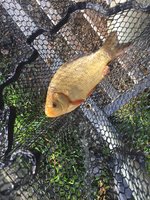 After sitting it out on worm with not much action I went back to maggot and had 3 more carp between 2 and 4lb throughout the day. But the last real bonus of the day was another Perch pushing 2lb at 14.20. 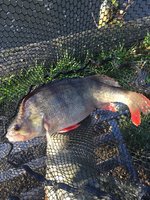 I had a few more Ide and Chub but it was generally slow going and my overall weight was a lot less than I usually do there with only 5 Carp in total. I will put that down to trying a new pool there but all in all when I came to pack away at 3pm I felt I'd had a decent days fishing with a brace of decent Perch which made the day. I think next time I will be back on my usual Willow Pool on the deep peg, and also make sure I have something to darken off the groundbait as I'm sure that would have helped today.

Did not catch a Bream today, after saying I was going to catch a double from here, but there's always next time!
Last edited: Dec 5, 2020

Nice variety there, worth going for those perch alone!

Nice one. Your own rod race there mate. You will have to do a second series and get 100lb of Barbel from HL next.

On the float as well hopefully. It could happen. In winter I am just happy to be fishing though.

That sounds like a good day, some nice fish and photos .

The first small carp looks like an F1 from that angle and the fourth fish looks like a chub, but the second ide really is an ide!

Yep I think you're right there! Got a bit mixed up as had a few distinct Chub and Ide throughout the day. And most likely to be an F1.

I went back to Furnace Mill on the 17th of December. When I told my dad I was going he said he wanted to come as well. A really pleasant surprise as I love fishing with my dad and did not expect him to want to come out in the cold weather. I remember the date because my dads Brother, my uncle, sadly passed away from an unexpected heart attack on the 18th.

We decided to fish the usual Willow Pool this time. My dad went on my usual peg, peg 57, with the deep 7-8' water in front of him. I went a couple of pegs down but the platform was slightly slanted and slippery from the frost so I moved 3 pegs down giving me more of a cast into the main bowl of the pool. Turns out the main bowl is shallower at about 4.5'.

I've said before I think the fish shoal up in the deeper water here over winter but I'd never really tested that theory as I always fish the deep pegs there. Turns out on this day it was right. With the frost the night before the grass was white when we arrived and I said to my dad, 15 decent fish will be a decent day. He had about 11 Carp, a Barbel, and 3 small Roach. I had 2 Barbel to start with, then lost a couple to hook pulls, then it went quiet until I had a micro Tench and a 3lb F1 to finish the day. So a very slow day for me, one of the slowest I've had there, certainly on this pool, but at least my dad caught a few.

I didn't feel even likely to get a bite after a while as I felt there was no fish in my peg, but my dad caught slowly but steadily. So next time I go back there I will fish the deeper pegs. We were also using Sonubaits F1 Sweet mixed with fishery Micro Pellets. I have a feeling that the fish spook off the light coloured groundbait at this time of year which didn't help matters, so next time I'll make sure I have some F1 Green instead. I think Green is pretty good there as the fishery pellets are green so they are used to that colour, as well as being darker for the clear coloured water.

That's the only time I've been out recently as the rivers, including the Stour near me, have been really high. I want to float fish the Stour to try out my new Shakespeare Rod but have a feeling that won't really come into its own until Summer as I think a more static bait is more likely to catch when it's cold as the fish will be less likely to chase bait around but you never know? Hopefully, weather permitting, I'll be back out at Furnace Mill soon though.