Wanted to get out today but looking at the forecast last night for today i thought stuff that, 45/50 mph winds for us, didnt fancy it so was in no rush this morning, well to be truthful, wasnt even going to go but that early wind hadnt arrived and the forecast now was for plenty of wind still but nowhere near what they were telling us last night

After a bit of headshaking and getting into gear I threw some stuff together and got away, no early start this morning in fact the ten o clock news was on radio tees when I was driving down the parkway, reckon it was closer to half eleven before I got some baits in the water, looked good even with the wind increasing but it was in my face and pushing all the rubbish and leaved into my nearside bank where I was fishing under the tip

Wind increased during the day but the river looked right, nice peaty but clear colour even if it was a tad on the low side, today would be a day for sticking a rod through likely looking bankside vegatation looking for a holding spot for a pike 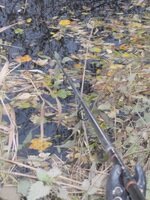 Bit of a pain today with all the rubbish pushing in to my side making the line dance and the alarm beep, you think theres a fish and its just twigs caught up in the wind and current taking the mick 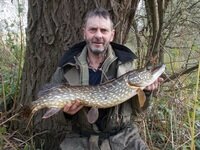 Bingo, thats the blank avoided and what a stunning looking colouration, fit as a butchers dog and not having the net at all, took a while to bring to the net but worth the effort

Sort of rushed the packing of gear this morning and hadnt realised I only had 1 sardine bait in my cool bag, bugger, I usually like a few more than that, using those blast frozen ones from Aldi, £1 a pack I think they were for 6/7 baits, real good value, better still when this got a hold 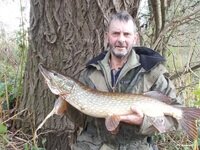 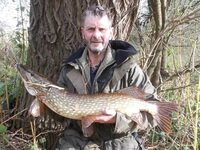 Real long fish and laid in the net it looked every inch a 20, big solid fish, plenty of length and big across the back and well filled out, what it really weighed I'll never know so I reckon its safe to call it 19lb, in my rush this morning I forget the scales, had the weigh sling but no scales, ah well. Reckon the first one as 15lb+

Had my share of a few big river fish over the years so although its disapointing in a way, its self inflicted and regardless of whether its a 20 or not, its a cracking fish, again right from under the tip

Quite chuffed so far, two very good river fish and a real short session, didnt think it could go much better but it did 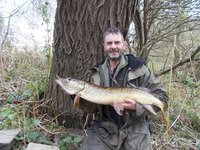 This last one took a popped up roach fished on a very long trace, again stunning markings and all three were in great condition, fantastic colours and fit, very very fit, about 16lb+

Bit of a red letter day and all three came from a 22 yard long section of river, think they must have been in the chain gang, three big fish very close together, would like to repeat that sometime again this season, packed up at three so not a long time on the bank but very enjoyable
D

Well done that man. River pike do fight dont they ? I bet Danny ( Dalton Angler ) is chuffed for you. Well done pal

Thanks guys, probably should have mentioned those are Tees fish, quite a hard northern river to fish and get right especially when you see its catchment area, but when it does fish it fish's well

Ya wont catch owt sat on the settee. P.A.C Member

Nice fish there Brian, I'm gonna give deadbaiting a go this winter, got some tackle ordered and some frozen Mackerel from my last sea fishing boat trip in the freezer so nowt to loose!
May take me a while to catch but I won't be put off by blanks!

Good because you will get a fair few blanks along the way, then it all sort of comes together, post up if you go whether you catch or not, the boards need more fishing related topics with members who actually fish rather than some of the rubbish that posted

Ya wont catch owt sat on the settee. P.A.C Member

Will do, I'm looking to start on a small canal near me where the last couple of float fishing sessions for roach were plagued by pike both small and large. The weather as changed a fair bit since those sessions, so I'm hoping the roach are still in the same area but will be looking at moving methodically down the bank anyway!
S

Great to see some fish have stayed out of the way of the seals Brian, looks like you had a great days fishing.

Cheers Stu, I keep saying that the seals and otters havent emptied the river and theres been a few of each of those and yet three decent fish despite them

Just need to keep it up catch wise