Up at 8 and what to do..........
I Grabbed the carp gear and headed down for a morning session, with air temperatures an ok 6 degrees, but water temperatures still less so.

I was greeted by strong NNW winds and the objective peg wise was to find one that may be i could exploit any fish following it but also to find one that i was comfortable in, with the penultimate peg (14) on the brookside fitting the bill.

I usually place an each way bet and opt for half way up either bank in the middle number pegs on this venue, in reflection of my limited knowledge and almost conundrum like factor this time of year, of depth of water being key, the wind had to take priority today, with today's peg being as deep as it gets here, but with the water lapping up the end slope being accessible. 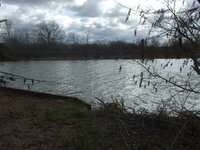 Although i was missing my fishing partner today, i managed to bribe some regular company from a robin who took a liking for the coconut boilies i put its way. 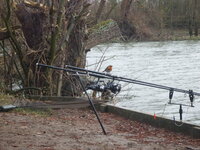 On the subject of bolies, i have found this venue to be an out and out boilie water, which suits me fine with my take anywhere and year round boilie approach i use. It can seem quite a limited tactic, but temperatures, fish response and the ever important feeding can all be adapted to, simply by amounts and rates of feed, matching the hatch or using glugged baits and one positive of the wind was the lack of gulls, which usually are ready to ambush anyones freebies the minute you even pick up your catapult or throwing stick!

My routine remains the same and i fished a short rod down the near slope and a long rod to target longer, with pineapple and also coconut flavours being my go tos from Nov to April, today opting for single glugged ones and no feed initially. 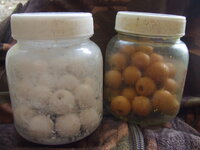 The longer rod was going to be used for accessing the end of the lake, where i felt fish may be given the wind. The above boilies aren't badly made ones by the way, i drill them out prior to glugging, not only does these allow for more penetration of the flavouring, but i always fish critically balanced baits and then plug the holes with appropriately coloured and also flavoured if needed, rig foam. This setup also gives me the option to fish the bait more popped up, just by adding a longer length of foam into the bait.
In keeping with my winter sessions, the stove and a Barbel book accompanied me and under the brolly system with the book, coffee, soup and radio for the footy, its home comforts, but in appreciation of not going to catch anything being sat at home. This latter point being my motivation for braving weather that almost saw all four seasons in a few hours, with strong wind, rain and even sleet at one point, intertwined with some nice bright weather.

After a couple of hours, i was just getting into a chapter i have been meaning to re-read on Barbel bait application and i observed the climber ease down to the floor, lifting into the fish it was clear it wasn't a carp, but too busy a fight to be a bream, minutes later i got a view of the nice golden flank of a tench slipping of the net. 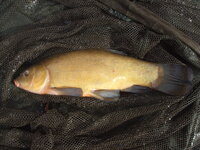 A golden glimmer of hope in these times and one that brightened up my day.

Do you take the water temperature at all?

As you know I lower a probe off the platform through Autumn, Winter & Spring and that helps judge how to approach the day.

Yesterday the water was 6.7 (Millcotton Snake) the highest I have recorded this year. This I think is what brought the carp on the feed and so I ended the day with more of them (12) than I have seen since Autumn.

Not for carping Neil no, it takes away time from my good book. I have when Barbelling though.

Well done for braving the elements Chris, hope you didn't get caught in the hailstorm we had here. Definitely four seasons in one day. Glad you caught a lovely Tinca to make it worthwhile.
D

Nice one Chris, roll on the new season and a rise in temperatures

Cheers all.
Yes got the hail Kev too.

1st Evening Match of the Summer