Why is carp fishing so popular?

The most fundamental reason for carp fishing being so popular is that lots of people enjoy it.

I still despair of the usual complaints general coarse/match anglers have about carpers on here. Whilst I don't doubt there being a fair kernel of truth in the tales told, I don't see it in the carpers I mix with. That's largely because they, and I, avoid such shenanigans like the plague. Most general coarse anglers hate the very idea of "elitist syndicate waters". However, the presence of inconsiderate anglers (of whatever type) is one of the main reasons for their existence. The existence of syndicates and day ticket specimen waters (think Linear Fisheries) is also the reason why many normal coarse anglers don't tend to see the decent carpers, many of them are avoiding the waters you are describing. I know plenty of lads that wouldn't set foot on the likes of Linear due to some of the folks that go to such places.

Some things that carpers do will annoy some other anglers regardless of how considerate they are. Bait boats are a classic case. Most coarse anglers seem to hate them and there are plenty of carpers that are vehemently opposed to their use too. Some carpers will be annoyed by perfectly acceptable things that average coarse anglers do. That's just the way things seem to be. Some folks simply need to separate themselves from the things they object to.
B

I've nothing against carp anglers themselves. Yes, there are a few dickheads out there and they are generally a bit cruder than your average coarse fisherman, but I don't hold that against them - we all deserve a chance to fish in a way we enjoy.

Which is the problem, the complete dominance of carp is stopping me fishing in a way I enjoy. I don't want to catch carp, but you have to go a long way to find a lake without them.

This isn't the carpers fault exactly, but I'm not going to pretend I'm happy about it.
B

I have only just got back into fishing in the last 3/4yrs after a 25 year gap, started back on the float rod for a short while, tried the pole (hated it) then discovered the method feeder which is now my go to type of fishing, especially as my 8yr son has now gone from his little whip to a short feeder rod and is absolutely loving it too. But as we have both started catching bigger fish we find it really enjoyable and want to try and catch bigger fish so will be giving big carping a go, we already love camping so a night in the bivvy bankside sounds like bliss to us, and the wife gets a break from us! As long as it's fishing and the proper care and attention is given to the fish who cares what type of fishing you prefer!

BURNING said:
last time I was in a carp venue trying for tench 3 blokes rolled up and set up their rods in three corners of the lake then congregated 50 meters away from their rods and spent the next 4 hours chatting
Click to expand...

A pet hate of mine that is.
L

And mine it's called a Carp lake for a reason so why Tench fish it?

Lee Richards said:
And mine it's called a Carp lake for a reason so why Tench fish it?

I agree with one of the posts above in that I don't have anything against carp anglers, in fact a lot of my fishing starting out was carp fishing with my dad but it seems like every lake the used to be well is now being overstocked with carp. A lake that I used to match fish was mainly full of some really nice roach, rudd and crucians but had the occasional carp in it. Catching one was an achievement. It was also one of those lakes that you never knew what you were going to catch, which was a big part of the draw of going there. They gradually stocked more carp and bream in which was fine as they had lost a few fish due to cormorants etc but it didn't stop, just kept adding more and more carp to that point that it's all you catch. The last time I went I set up light gear for the roach, tench and bream but I had to go heavy in the end as actually don't think I caught anything other than carp all day. It's happened at a few other local venues as well. It seems like there isn't any lake in Cornwall that isn't just carp now. It's near impossible to fish with any sort of refinement for other species without thinking at the next bite you'll be smashed up by a big carp.
I still go carp fishing and enjoy it but I wish that down here there was a lot more variety when it comes to course fishing. I'm sure it's also a trend that is happening throughout the rest of the country too.
(If anyone knows of a decent silvers lake down here then please let me know). 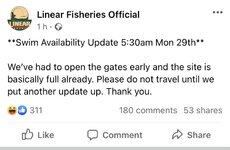 Linears - the morning that travel restrictions are lifted and overnight fishing is allowed - its full by 5.30am!!
Last edited: Mar 29, 2021

Linears - the morning that travel restrictions are lifted and overnight fishing is allowed - its full by 5.30am!!
Click to expand...

Crazy isn't it! Same with one of my clubs they've been restless as hell to night fish. All I can say is that they must have some dragon like women and/or wild children at home to be that desperate to spend days on end in a tent without a shower whilst pooing in a bucket to probably not catch that much this early in the year

62tucker said:
Without carp you might never have got the buzz and hooked on angling in the first place.
You could say the same about fly fishing. Many a fly fisherman have never sat at a lake or river with rod and reel. Are they missing out. No. They do what they want to do. The world is full of different people, imagine if we were all the same and liked the same stuff. Be a sad place.
Click to expand...

Many of the fly fishermen I know.....Including myself are now fly fishing for carp. On light tackle they fight better pound for pound than a trout....We dont want a freezer full of dead trout.............we don't have to contend with a "limit" and you can fish all day for a fraction of the cost of a days trout fishing. So many trout fisheries are closing or have closed. The put and take model is too expensive.............youngsters cant afford it. Its slowly dying. I really enjoy surface fishing for carp with a light fly rod .

BarryS said:
Many of the fly fishermen I know.....Including myself are now fly fishing for carp. On light tackle they fight better pound for pound than a trout....We dont want a freezer full of dead trout.............we don't have to contend with a "limit" and you can fish all day for a fraction of the cost of a days trout fishing. So many trout fisheries are closing or have closed. The put and take model is too expensive.............youngsters cant afford it. Its slowly dying. I really enjoy surface fishing for carp with a light fly rod .
Click to expand...

Used to go fly fishing a bit but only went to same local place. Went with my son. But when he turn 14 they wanted full adult price for him. And just wasn’t worth it really.
Could go on a commercial all day for a 1/3 of cost.

rudd said:
Use a brolley system myself.
Only do single nighters now as dont really sleep, nothing like being under the stars all night listening to owls and wildlife whilst counting satellites. Dawn chrous and watching a water come to life in the morning whilst having a brew and enjoying warmth of sun on face.
Its not all about catching fish but spending the night out under the stars.
Yes on occasion you get a run and a specimen fish - thats just a bonus to me.
Click to expand...

Absolutely, add to that watching predawn mist slide down a sloping field and slowly fill up the lake with blur, or listening to the muntjack deer tippy toeing around behind you in the scrubby bushes or the barn owl flitting along the bankside at dusk. oh and the welcome visit of kingfishers on your rod. Am happy enough for a few decent fish for my efforts overnight and the endless hope of the huge surprise tench at dawn that never appears

CarpCatcher86 said:
I have said words to that effect on this forum before but it seems to fall on deaf ears. I see young lads on carp waters farting about with marker floats, spodding for hours on end and firing leads out beyond 100 yards. Why? Because they have seen someone on tv or youtube doing so and think they have to follow suit.
Click to expand...

Margin, always feed the margin and drop one in over the top...

Why taking someone fishing is so important

P
Why such massive nets?
2