Whippin’ it out in public

Don’t worry, I’m not talking about things that would get me arrested. I’m talking about my Acolyte 5m whip that I took for a little jaunt this afternoon.

I had half a pint of maggots left and had finished all my jobs at home so I went down to canal that runs through my town. It’s the South Yorkshire Navigation Canal, technically, but the locals call it Mexborough canal. I fished for 2.5 hours and quite enjoyed myself, I walked down with a pocket full of terminal tackle, and just a whip, landing net and unhooking mat to kneel/sit on.

My first swim was an old favourite, this used to be gudgeon city. I haven’t fished it for about seven years so didn’t know if it still was. 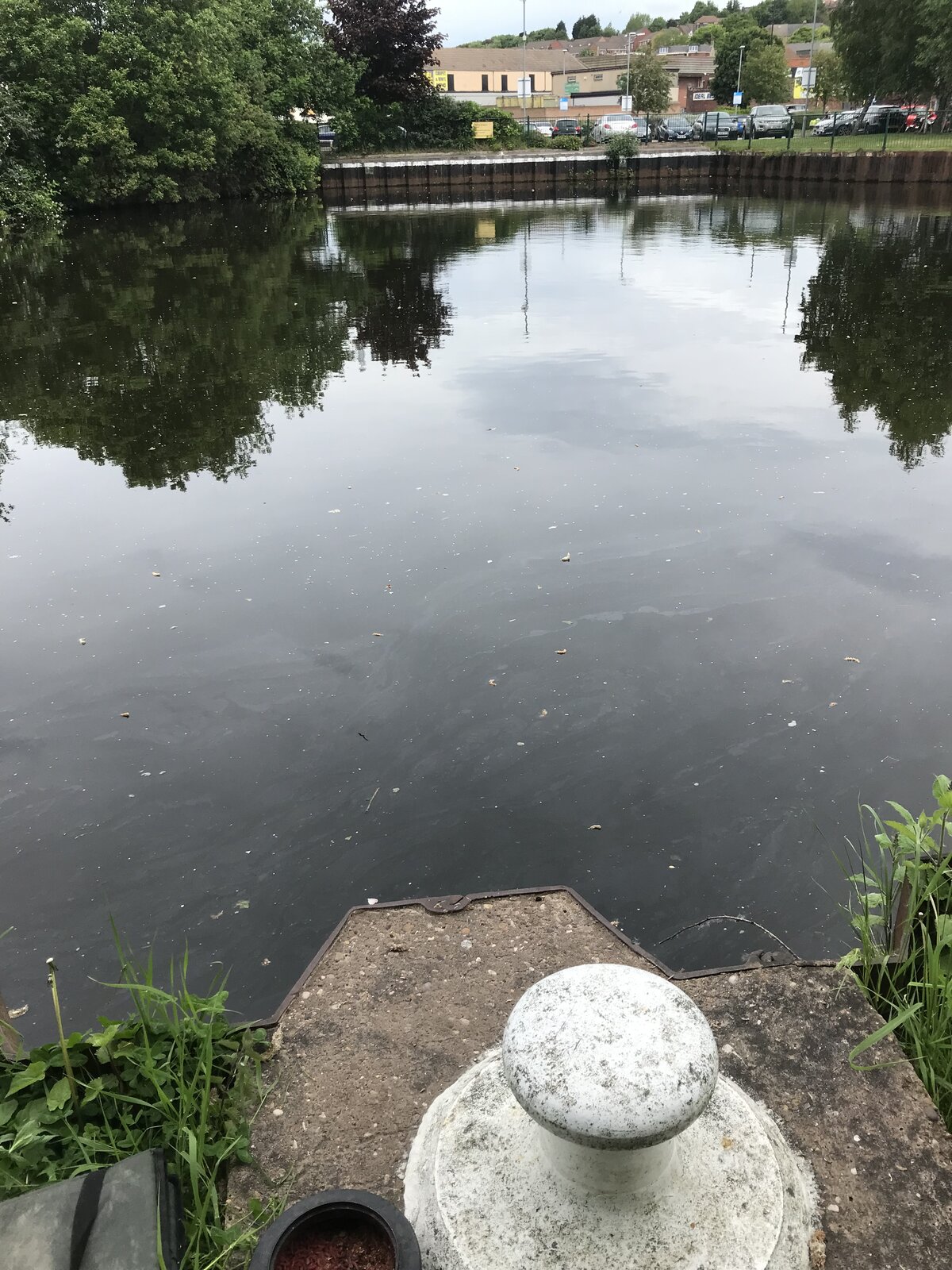 I probably looked like a gnome sat on the little white stool, but I appreciated it being there. It’s quite deep here, 8-10ft, I fished a 0.8g glass stemmed float with no 8 stotz strung out, as there wasn’t a lot of tow. 3.2lb mainline to 1.7lb hooklength and a size 20. My first two ‘bites’ resulted in… a sock, and a big stick! There’s some serious snags down here.

It took half an hour for the fish to show up, and I eventually started to get some real bites from roach. I had four in quick succession then I hooked into something bigger… a mouldy looking even bigger stick, which liberated me from my hooklength.

The roach were decent but no gudgeon. 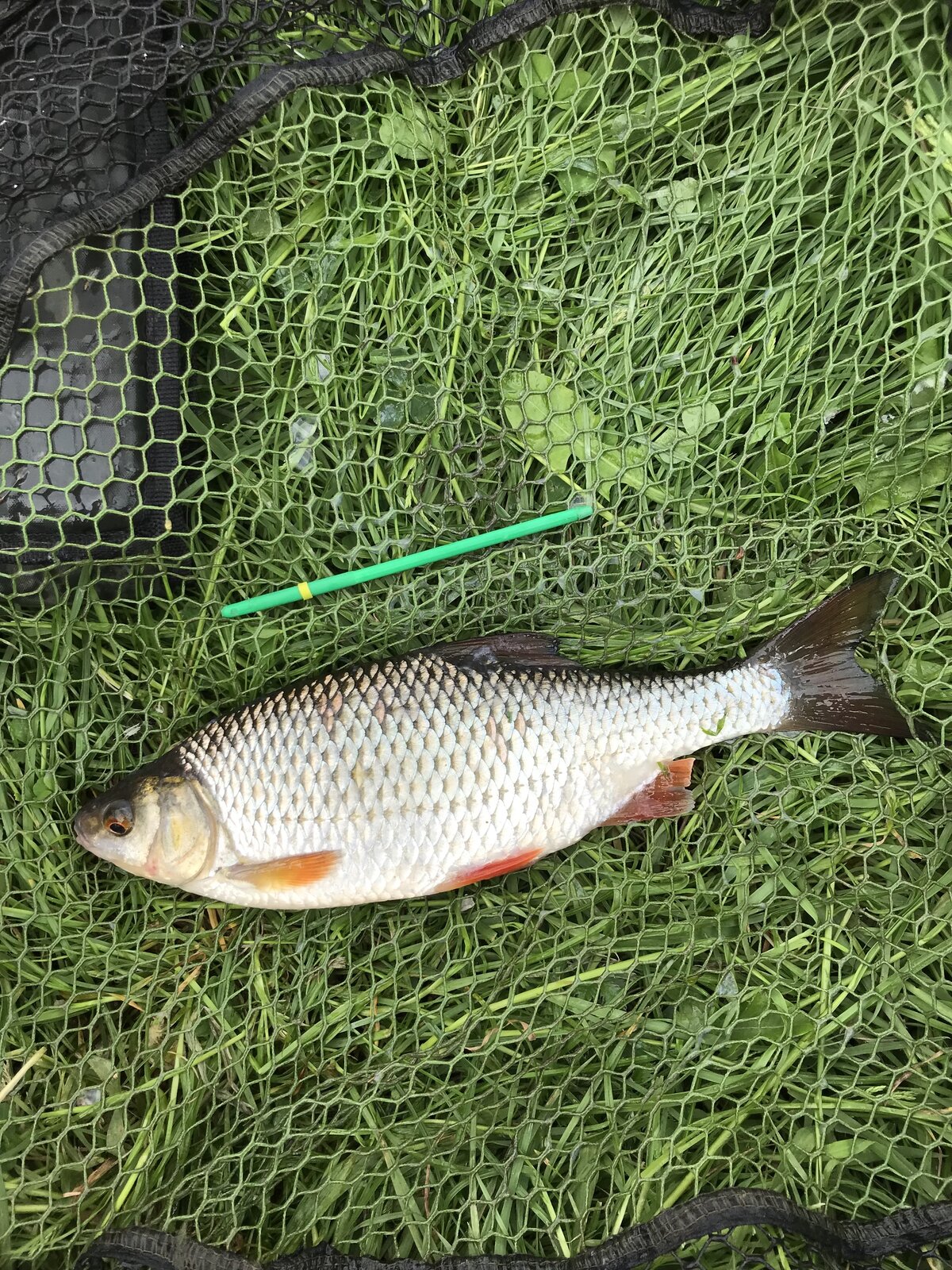 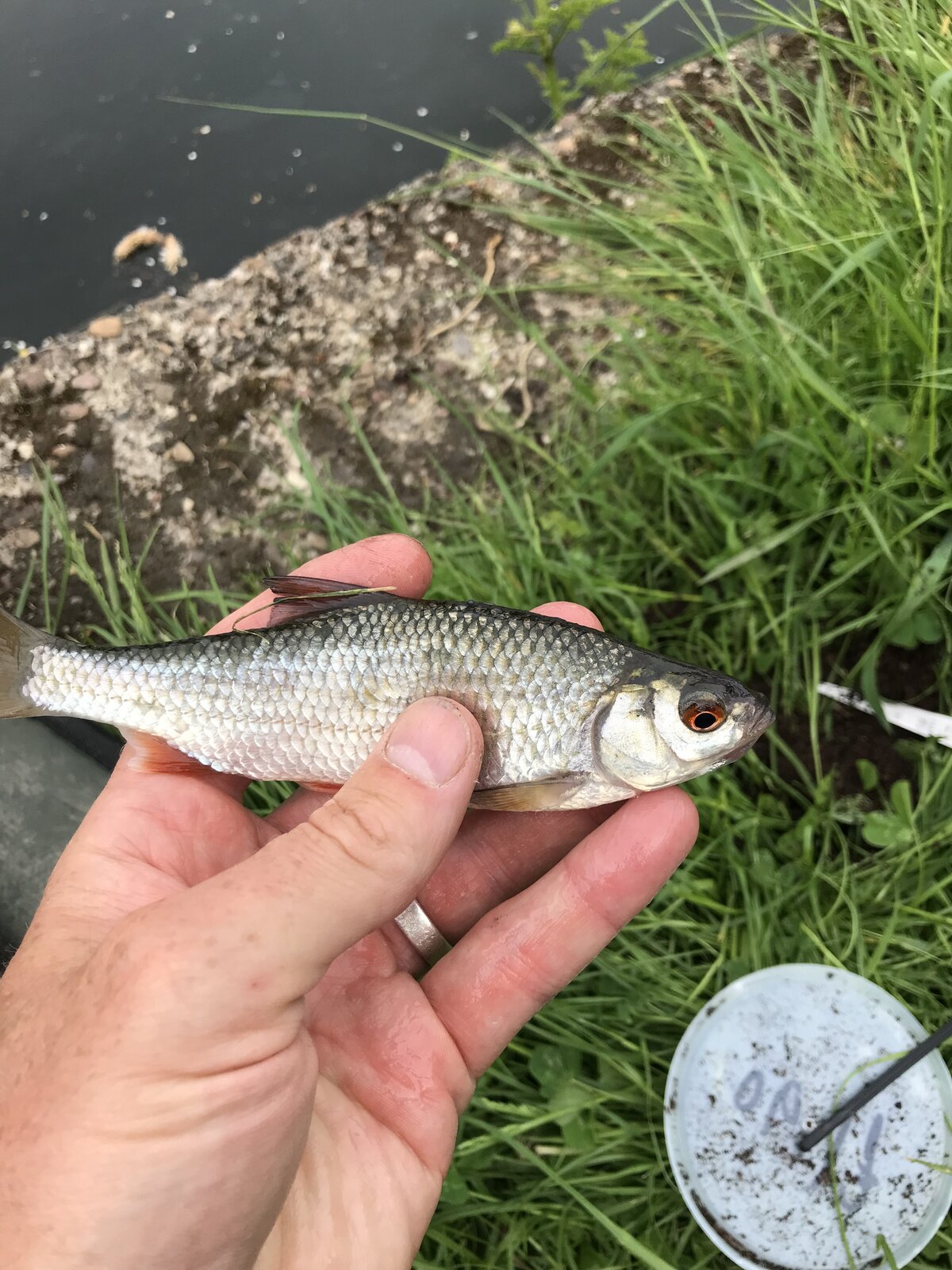 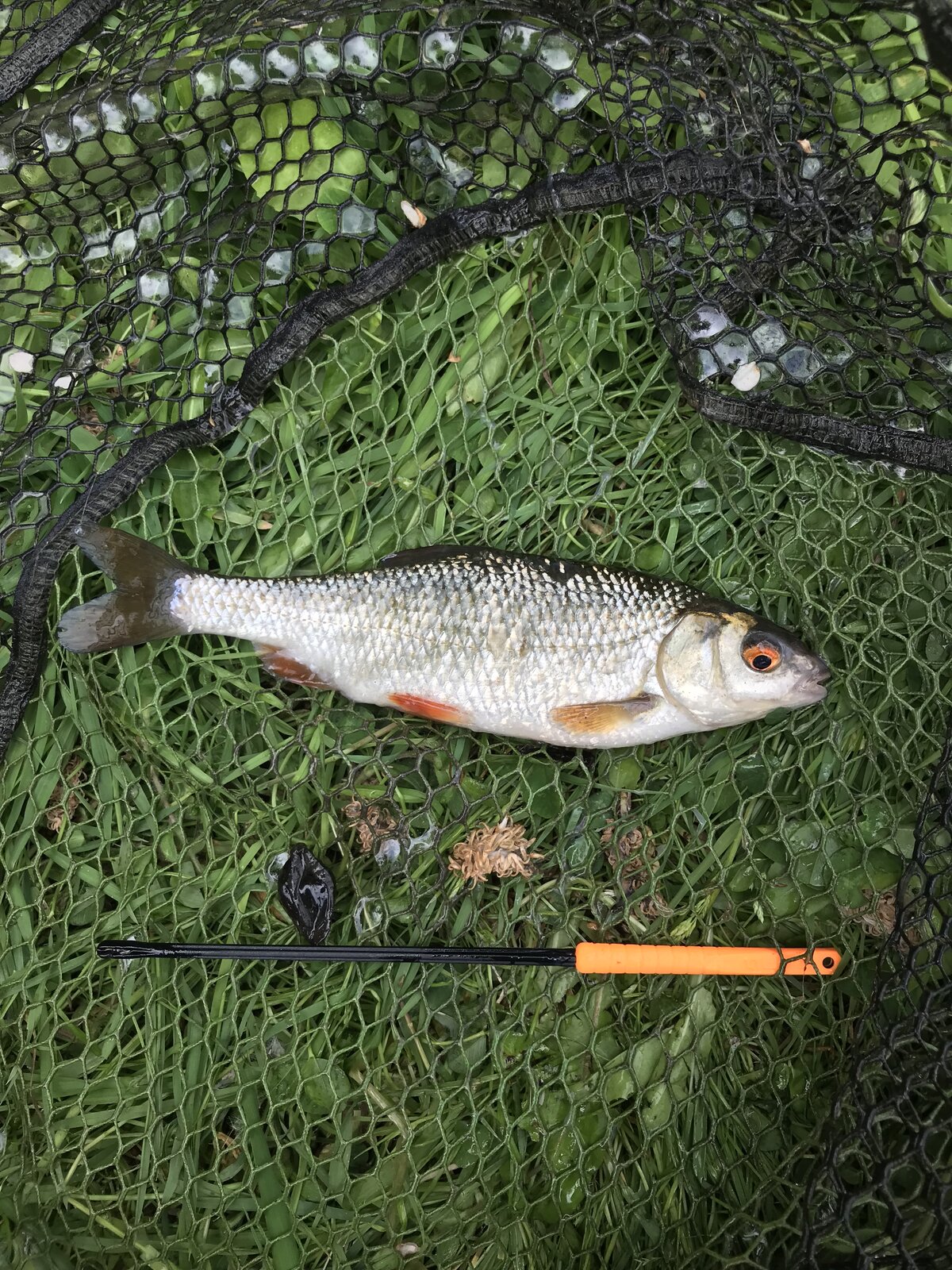 Bites dried up so I moved spots for the last hour. This swim has a couple of lily pads which looked ideal, it was 6ft here and I had a couple of roach along with three perch. 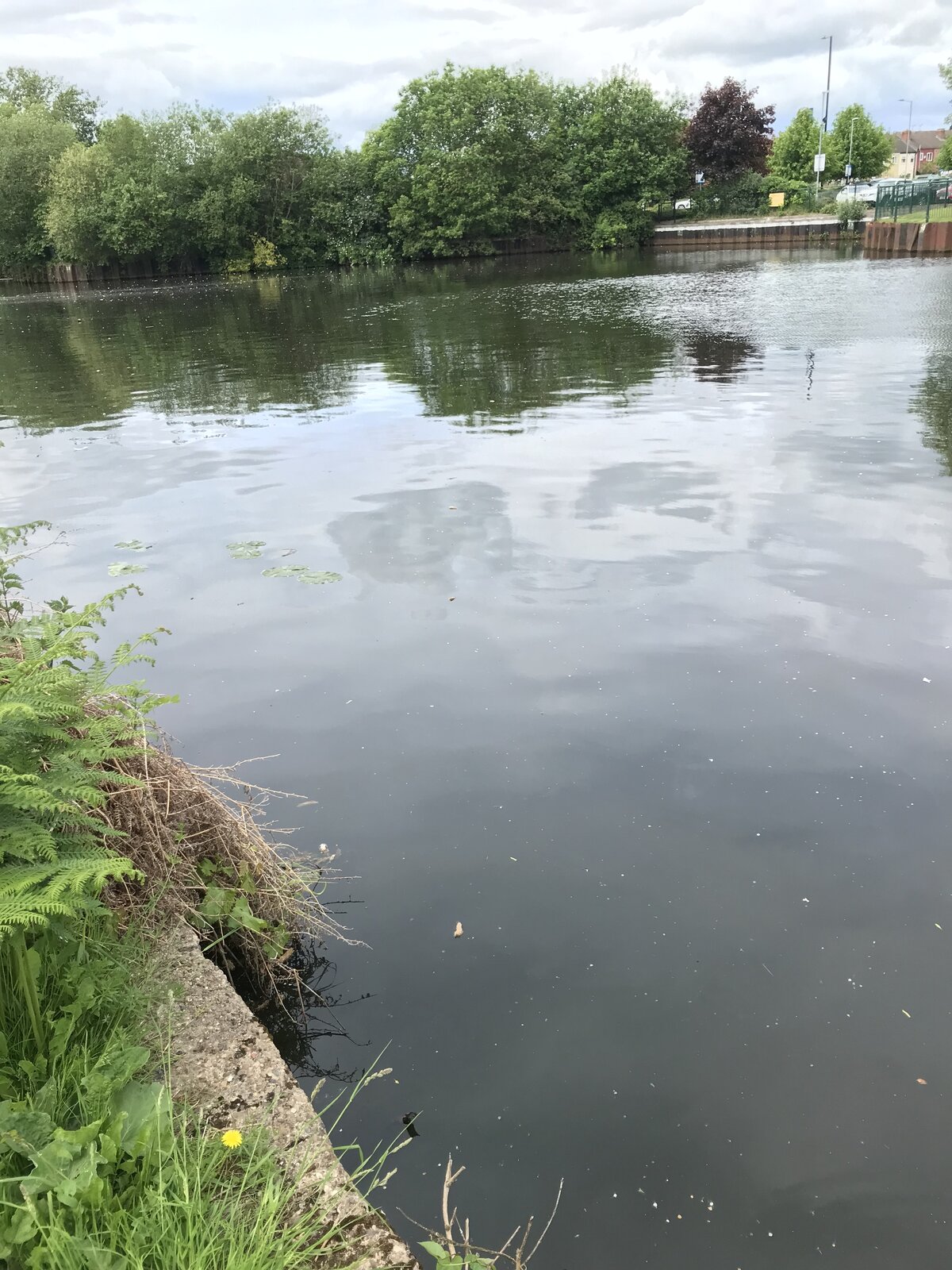 I introduced a bit of chopped worm and put a bit on the hook, this resulted in a decent fish which made its way out to my right. I put steady pressure on, conscious of the light hooklength. It was slow and steady, not like a roach or bream. The whip had a great curve on it, and I was starting to get excited when whatever it was woke up and charged for the other side. The hooklength snapped and it was gone. I think it was a tench, but I’ll never know.

I had the same thing happen again half an hour later. Similar fight, decent fish, this time with a pair of dog walkers watching on. I played it for a couple of minutes before losing it. They seemed as disappointed as I did as I bemoaned my decision not to bring some slightly stronger line. Apart from another couple of roach, that was it, time to go.

I’ll definitely go back and fish there again, it was nowhere near as prolific as it used to be. But I’m intrigued to know what the bigger fish were…

I have the 6m Acolyte whip, they are a joy to use aren’t they mate

, but it’s always going to be a problem if you hook a big fish, all you can do is hang on and hope.

Brilliant write up, sometimes a short and forgotten piece of water just gives you the buzz again

We used to catch big nets of bream casting feeders toward the far corner growing up as kids. You peaked my interest now

Dave Spence said:
I have the 6m Acolyte whip, they are a joy to use aren’t they mate

, but it’s always going to be a problem if you hook a big fish, all you can do is hang on and hope.
Click to expand...

They are really are a joy, so light and the action is superb. I’ve been surprised at how much it cushions light hooklengths, I had skimmers to 3lb last time I used it. And yeah you’re right about hanging on!

AdamRussell93 said:
We used to catch big nets of bream casting feeders toward the far corner growing up as kids. You peaked my interest now

It does look quite ‘breamy’ in that bay area. I wonder if the bream are still there? I did speak to an old guy a few years ago that told me the cormorants had decimated the roach. Whether that’s true or not, I can’t say.

AdamRussell93 said:
That’s also the area you see the koi cruising around in the summer

It’s probably attracted to the Lidl bakery like I am when I’m in that area. I imagine there’ll be some big carp in there too. There’s too many fishing choices and not enough time to do them all, I need to win some money and retire early.

I’m trying to get Friday off work so I can head out for the day somewhere. Think I might go to to elm tree at kilnhurst and lob a feeder towards the island for a few hours.

Elm Tree is a nice fishery, I’ve been a couple of times in the past. It’s similar to Ferryboat in that they lose a lot of carp to the floods every few years.

I like the stocking variety there. And the carp there are mostly in good condition. Mark the owner is a sound bloke as well. Takes real pride in the place

The Weaver at Acton Bridge.

Only the Perch really feed...

A break from the norm.

Rother on The Washlands.