Which freshwater fish have you not caught?

Double figures of ruffe- that would have been a sight to see.
At round about the same time for a year or two there were a couple of swims on the GUC at Denham on the bend above the white bridge where you could do 4 to 5 lb of them fishing very close in- barely saw one anywhere else on the stretch.
Very top end of the Oxford canal had a lot at the time as well but very small. Weighed in about 70 of them and a few gudgeon for a pound and a half from a rotten draw in a National there.
Ever since then it seems to have only been odd ones everywhere

Most Ruffe I’ve had in a session was 6 surprisingly from a Stillwater, were quite a decent size as well. From rivers they’ve almost always been one offs save for the odd couple here and there. They do seem to have vanished recently though ?

The Runner said:
And Schelly... (In Ullswater and a couple of smaller lakes nearby )
Click to expand...

I caught one of these in Ullswater 20+ years ago

I haven't caught :
Catfish (although I have caught a variety of species of them in the Middle and Far East)
Lamprey
Pumpkinseed
Stone loach
Salmon (only caught parr)
Sturgeon (one was reported from the Calder at Wood Nook last season I believe)
Zander

I caught a Black Ribbed (for her pleasure) Knobbler out of the Regents Canal.... do they count....????
J

quite a few I've never caught (and a few on the list I've never heard of) but I managed to catch my first grayling this season. I'm having fly fishing lessons next spring so I might get around to ticking off the trout eventually.

Re Ruffe, there's plenty in the Grand Union running pounds round Hemel, some locals think they are baby Zander though. On a summers day you should be able to catch at least one each session, quite small though not the size you get on places like the Shropshire Union

I think my list of not caught species would extend only to sea trout and grayling plus the more rare species like lamprey and char.

I have caught a bitterling from Decoy's Horseshoe lake. Zander both here and in France where I have also caught a small catfish species called, I think poisson chat but not one of their bigger cousins the silure. Also in France or Belgium pumpkinseed fish, grass carp and sturgeon (sterlet?). I am fairly sure I have caught salmon parr from the Tay in Scotland while fishing for roach. Flounder was my first ever fish from freshwater.

Dave said:
From the list below, tell us which species you have still to catch: (only UK caught fish count)
Click to expand...

In that case, i haven't any of them. But I have caught what most (probably all) of you haven't. This one in particular, caught in a small river, weighed in at 2.8 kg. 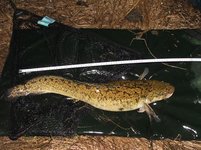 Neil ofthe nene said:
I have also caught a small catfish species called, I think poisson chat but not one of their bigger cousins the silure.
Click to expand...

Sorry couldn't resist that one, back to topic

Robwooly said:
I knew a guy who won the small catfish cup - yeah it was a poisson chalice

Sorry couldn't resist that one, back to topic
Click to expand...

Is that the Chalice from the Palace or the Vessel with the Pestle? Or of course the Flagon with the Dragon.

There are a couple not on the list that I have caught in freshwater though it was quite a few years ago
Allis Shad
Twaite Shad
Flounder
Though they are generally considered to be salt water species the shad come into freshwater to spawn. All the ones I've caught have been from the River Usk, well above the tidal reaches.
N

The one and only Harvey said:
In that case, i haven't any of them. But I have caught what most (probably all) of you haven't. This one in particular, caught in a small river, weighed in at 2.8 kg.

Never having seen one (other than drawing) I presume that is a burbot?
nice one!

NoCarpPlease said:
Never having seen one (other than drawing) I presume that is a burbot?
nice one!
Click to expand...

It certainly is. Caught in my then local river, late evening / early night in the first days of december. The autumn and early winter had been very mild, but less than a week later, the big freeze set in, and everything froze solid for several months. The winter 2010/2011 became the coldest winter for many, many years.

Burbot are greedy fish, and swallow the bait very quickly. To avoid foul hooking, I came up with a hair-riggish style of rig. I attached a piece of fine wire to the boile loop, and use a long needle to thread the bait, half a filet of herring, onto the string. Then folding the string back, and attaching it to the loop again. The end of the bait was round 4--5 inches from the hook. It worked well, and I hooked the fish in the outer part of the mouth. Since I started using this rig, I have never foul hooked a burbot. I fished on the bottom, using a powerfull Drennan Series 7 long distance feeder rod. Then can grow quite big, and I didn't want to be undergunned. 2.8 kg are still my PB in the burbot department.

I believe burbot have gone extinct in the UK, but have learned that there is a discussion going on about reintroducing them to select british waters.

Species you’ve caught most of
2 3