Where you fished today (Part 8)

So if you're new and have an hour or three spare take a read of the previous reports and lets continue posting.....

If you wish to include a photo feel free using the 'MyPhoto' but for the enjoyment of others, please crunch/optimize them to reduce your file size to less then 30,000bytes - the smaller the better []

Today was the last day of my short break and my wife Jill had planned a day Christmas shopping in Sheffield with her friend.

After dropping them both of at York Station (a little late due to traffic), I headed home and prepared my bait for the day . . . lets see then, a bit of red cheese cubed, small tin of sweetcorn, hmmm ! I'll take a few strips of cooked chicken ..... You never know [], aah . . .try some washed baked beans (saw that on this forum) and this time I'll take some chopped brown bread.

Arrived at Birkdale 10.40 ish and hobbled down towards the Carp lake, the wind was fresh and blowing towards the bottom of the lake, decisions decisions ! what do I do ?, I've blanked here on my last 2 visit's (at least as far as Carp go - only managed to get a few skimmers), the lake doesn't look very inviting, no real signs of life and the bank side has been trampled into a mud bath by anglers at the weekend, suppose they've fed the fish plenty too .... won't be wanting my meager offerings, THAT's it then off to bottom pond !. 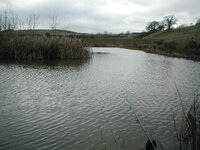 I choose the bottom corner of the pond, the wind is in my face . . .that's a good thing . . . I think ?. I had both rods on the ledger, didn't fancy float due to the wind and the lilly pads (which were full of lost floats).

Some time later Steven who is the owner/farmer appeared on his quad bike from across the fields on my right, closely followed by his Jack Russell.
After a few minutes chatting he told me that there'd been a match on this pond yesterday and that the best spot was just a bit further on from where I'd set up, nearer to the lilly pads.

After a few more minutes of chat all is revealed, Steven has a friend who's mother-in-law is Polish and apparently Carp is a prized Christmas delicacy, she gets one from him each year !. 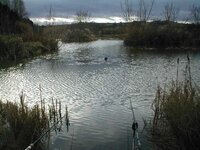 Well I tried the sweetcorn, then the beans, mixed the chopped bread with pellets and a bit of sweecorn liquid and chucked it near to my bait . . . . waited. . . . reeled in and checked my bait, changed it for fresh , etc etc ! it's just not happening for me, I'm really thinking this winter fishing is a waste of time and money, lets have a cup of tea and a sandwich.

Sometime later I was getting close to packing up, [] hang on a mo . . lets try mixing some softened cheese with small Carp pellets and using that straight onto the hook, that stinks a bit so it must be a winner ? 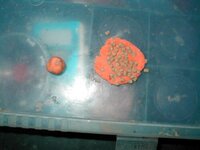 Not long after the same happened on the right rod (minus slipping) and I'd caught a huge 10oz Carp (yes I did say Oz not lb). 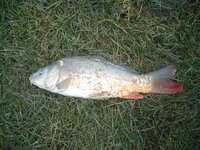 20 mins later the scene was repeated but with a slighty larger 1 lb fish. 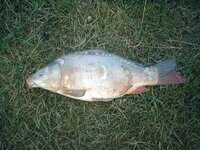 Well that just about rounds up my day's fishing, I hadn't blanked and I think I'm onto a winner with the cheese/pellet combination, I'll try that next time [^]

Nice report Andy, the fish may not have been very big but it sure beets Christmas shopping imo

Well done Andy for sticking at it,
Nice to see you got some reward in the end.[]

Got back from Elvington earlier and just about thawed out now so here goes:

A day's holiday booked and tackle in the car waiting I set off in freezing temperatures with the endearing words that my beloved said to me as I walked out of the door into a thick frost - "You cannot be right in your head going fishing in this!" - Too true, but I never claimed I was lol

Driving off down the road the onboard temperature thingy told me that it was 0oc outside but I was going fishing and without a care in the world and as I passed car after car stuck in the early morning 'rush' into Leeds I chuckled to myself whilst looked at the despairing faces of the drivers - ha - and with a wicked grin, the sort you get when winding Troggies up, I headed off to Elvington in search of the big Cat.
It was peg 17 that the Cat had reportedly settled in, the one that Zippy fished at the Northern Fish-in and when I got there to my surprise, I was the only one - what did the missus say, lol

Tackle on the bank and down to business. I set a rod up with just a bomb on and dropped it into the hole under the Hawthorn tree where the Cat was last seen and gently pulled it in towards me feeling for snags, sunken branches, anything that might present a problem later. I did the same under the old Oak Tree in the bottom corner and then tackled up two rods with baitrunners, 15lb line, small running leger and 15 Snakebite hooklength to a size 4 with a haired chunk of Luncheon Meat the size of a pilot matchbox.
These were dropped into each swim about 4foot from the bank in 6ft of water and the rods were placed onto alarms to sit and wait.
A good couple of handfuls of pellets and chopped meat went in around the hookbait for good measure.

It was going to be a long, cold day. The wind was racing over the surface of the lake and Stan's thermometer was registering minus 3 degrees with the windchill! Eee gods my beloved might be right after all, lol.
The one thing that I did know was that I could not just sit it out doing nothing so in peg 18, in the middle of the two rods I set up a small feeder rod with a size 20hook and a 1/4oz feeder with maggot to keep me busy - hopefully.

Several more came and the wind and cold faded into insignificance, then a surprise as the rod virtually got yanked off it's rest by this albino Perch

Another check of the two Cat rods and another feeder went in.
After Sunday's match at Woodlands I learnt something and that was not to feed too much in a feeder if the bites were shy or nonexistent in cold weather. I had a tendency to fill the feeder because I could, now up to this point I had been putting in just half a dozen maggots into the feeder and getting bites, so I filled it and cast in to the same spot and waited. Nothing -not a touch. Okay so maybe I missed the spot or maybe it's because the Perch have scared off the small 'uns?
So I recast gain filling the feeder and again waited without a touch - hmm? Back to basics, I wound in, 6 maggots in the feeder, recast and got a bite resulting in this Roach

Just goes to show.
Anyway it was now knocking on 3.00pm, the sun had just gone down over the horizon, and it was absolutely, chuffing freezing.
And as I was starting to feel more than cold it was time to call it a day.
No Cats but several little roach, about 8 decent ones and a perch so all in all not a bad day and better than working []

you had a good day then dave iam hopefully going there next week dont know what day yet i want to give that respect rod a tryout
will post the results or not. oh yea how do you use the smileys
thanks
steve

Nice one Dave at least you caught,

a big thumbs up (LOL)

Steve, for smilies read this: http://www.maggotdrowning.com/forum/faq.asp#smilies and if you use the option 'Reply to Topic' you can click on a smilie to insert it and there are more to choose from by clicking 'Additional Smilies'

thanks dave i will give those pegs a try[]

Ho Ho Ho!!!!!
Time for the Christmas Fur & Feather.[]
Everyone is guaranteed a prize,and funnily enough this meant the best turn out of the season so far!!

Now Lucks Lane Lake couldn't be described as the prettiest venue going.It's an old irrigation reservoir that is raised up from the surrounding orchards,thus catching any weather that's going,and today there was plenty!!!!!!
Oh and did i mention that the Eurostar trains thunder past about 50 yards away every 20 mins?[:0]

In it's defence it normally produces a few fish regardless of conditions.Being that today was basically a social event,i was just looking for a bit of comfort,so it was up with the brolly and out with a feeder to try and snare one of the lumpier carp that inhabit the venue.I hate fishing the pole in the cold & rain so that got left in the rodbag.[]
Between wandering around and chatting to most of the members i did actually manage to catch one.[]
A nice Mirror of 7lbs 10ozs which was good enough for 8th place and a bottle of Scotch.[]

Nice one Peter, will this rain ever stop?
pour yourself a scotch and forget the weather(LOL)

Talking of rain, me and a couple of mates had a small knockup on the local canal today, freezing cold, blowing a gale, got soaking wet when a gust caught the brolly, blew it inside out and snapped the metal stem (time for a new one!). but hey, we all caught a few fish and had a laugh, which is what it's all about! I'm back at work now till 5pm xmas eve, so roll on the boxing day match and a Happy Christmas to all Maggot Drowners[]

quoteour yourself a scotch and forget the weather
Click to expand...

or drink all of the scotch and ya wont care about the weather.[]

clean banks campaign wishes all anglers and there familys a very merry christmas and a happy new year.

well done Peter, that's a decent catch considering the time of year, what hookbait were you using ? []

Started on 4 grains of hair-rigged corn on a 14,but actually caught on a single red maggot on a 20.[]