What's Your Most Unusual Catch

A Pike on the pole at Smeatons Lakes Newark. 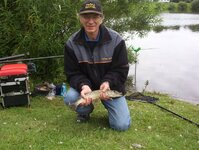 A really big (as in 4 -5 foot) long turtle when fly fishing for tarpon in Costa Rica. It hook half an hour to ‘land’.

As I have ginger hair my mates called me the ‘ginger ninja’ for the rest of the trip.

Total said:
A bat on fly gear!
Click to expand...

Also had a bat. Casting a small worm under a canopy of trees. Hooked right in the lip. Scary things. Like a mouse with wings. Unhooked safely with forceps and put in a tree.

Hooking a fish is unusual for me

I've never caught anything more unusual than a crayfish.

Though I've seen some people on here have caught lamprey, glad I've never had one of them, look worse than eels!

I have had some absolutely unbelievable blanks at times....... 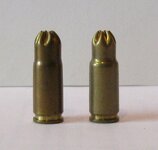 Hooked a small perch which lassoed another. So had a 2 in 1.

Nothing too crazy but in the past I’ve caught a mallard that I had to play in the air before getting it under control and landing it. Signal crayfish a couple of times, horrible things. And probably the weirdest thing was whilst waggler fishing many years ago, the bites had inexplicably dried up so I reeled in to check the hook bait and found a roaches eye ball on the size 20 hook! Hooked fair and square like an expander. I never did catch the rest of it.
C

Hooked a shrew on the river Salwarpe as a kid on BAA water.

As a kid my Dad caught an otter dead baiting for Pike, I think it was at Patshull
A

Pair of undies from the Thames earlier this season. They washed up alright. 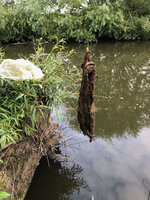 More of a near unusual catch, a Pelican had a go at my lure when I was holidaying in Antigua. So glad it let go!
L

As others have said,

Several ducks over the years but one in flight in Marlow Town centre on the Thames one summer evening.

Plenty of flounders up to around 8 oz around Keynsham on the Bristol Avon, quite a way from the sea.

Best was a catapult at Tunnel Barn Farm. Usual summer tactics, fishing shallow at 5 or 6 metres and hooked an F1 12" deep. At some point, the fight changed from clearly pulling against the elastic to a static (and lighter), dead weight. The bloke next to me started shouting "you've got to net your fish" when i clearly wasn't going for the landing net but then couldn't stop laughing when I swung a Matrix catapult in. I had the last laugh though - 205 lb, match win and bonus catapult. Result.

How are so many people managing to lose catapults?!
L

Two Channel catfish from the Tidal Trent some 26 years ago. A guy from Sheffield photographed the first one, which then featured in the Anglers Mail. They were black and smooth with spiked gills, tiny top fin, flat head with 4 long whiskers. I think they may have been put in the hot water area of the local power station before being flushed into the river. Someone said they were probably fish from a fish tank originally, but they were both big for aquarium fish. One was 3lb 11oz and the other 2lb 4oz. I have also had a 9lb Wels catfish out off the Tidal Trent on work when bream fishing. An absolute nightmare to get in, but a fantastic experience.
C

A terrapin at Stanley park lake in Blackpool. It was over a foot in diameter. I thought ot was a big slab to start with until i moved all the weed. Hair rigged sweetcorn on cage feeder.

A limpet whilst fishing off a boat in the Mersey estuary. My rod was bent double & it took ages to pull it free from the side of the boat
R

Nowt more than a moor hen. Got it in quick but gentle, threw my coat over it to calm it down (you want to cover its eyes), quick discorger and away it went a bit shaken but not shaken enough to stop trying to eat my ropey 10 day old slightly floatey maggots.
D

I was fishing the Humber with a mate, when we both reeled in, and were amazed to see an eel of about a pound and a half come up between us. We'd both hooked the eel in the mouth, not sure who would have weighed it in if it had been a match.

Had a canny size eel take a slow retrieved sprat and hooked on a treble hook and wire trace.
canny mess to untangle and glad I had my greys side cutters to cut the wire.
A strange experience hoping for a follow off a pike to see a eel appear from nowhere and latch onto the spear.