Not sure what match number we’re up too – lost track with all the cancellations but as usual the last match of the year was the Christmas Cheer and the venue, as always, was the smallest pond at Dromonby Farm Fishery. There’s only twelve pegs on the pond, although it is possible to squeeze another one or two in, providing everyone’s good friends. Fortunately I only had twelve names down anyway so it wasn’t a problem – Barry arrived and then departed again and Darren never showed so I could leave both the pegs down the bottom end out since they were likely to get the worst of the wind. 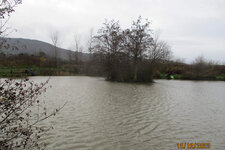 Being situated on the foothills of the North York Moors, Dromonby is a little exposed to the elements at the best of times and even whilst I was pegging out the wind was already starting to pick up. Peg 4 was to be my home for the day – a pretty nondescript peg to be honest. I did have the island to aim at but with the wind I doubted I’d hit the same spot twice at that range. I set a tip rod up anyway – just my little 7’ Browning wand with a small maggot feeder, an 18” hooklength and a size 20 B511. I wasn’t even going to attempt to fish a long pole so it was top kit plus 3 or 4 sections. 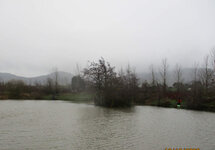 The forecast rain hadn’t started yet but I thought I’d erect the brolly anyway and get it well anchored down – brolly clamp on side of box, pole pushed through that and well into the ground beneath and a bankstick through one of the peg down points. Problem was that the wind wasn’t blowing left to right it was at about 45 degrees, so practically in my face. I’m very impressed with the brolly (NuFish Aqualock) – it turned inside out three times in the fifteen minutes I had it erected and bounced back on each occasion, not willing to chance it happening again I packed it away. Not quite as impressed with the pole which has developed a profile similar to a dogs hind leg – perhaps time to invest in a solid one.

I started on the pole at an easy 6m and got a bite on only my second put-in, landing a fish on my third – just the usual little roach. The wind was really gusty but I had about 3’of line above the float so was able to keep it reasonably still. I had half-a-dozen fish for about 8oz after an hour and other than Peter who’d snared a couple of early carp dobbing bread right into the reed-lined corner on peg 12 there had only been a few silver fish caught.

With the increasing strength of the wind my presentation was really suffering on the pole, even when I dropped a section off to fish closer in and I was struggling for bites. Kev to my right snared a fish on the feeder – it wasn’t quite hooked in the mouth. 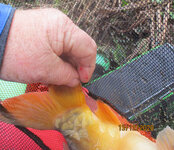 Rob got a couple and Steve W. over in the far corner on peg 8 also had a fish or two, although he lost this one when his elastic snapped. 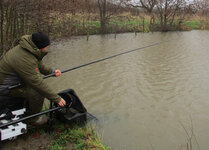 I’d switched to the feeder myself but the only bites I was getting were from small silver fish, the maggot just being nipped rather than destroyed as would result from a carp rejecting the bait. The rain had arrived with a vengeance now and it’s strange how you feel colder and wetter when not catching compared to when you’re getting a few. Steve R. snared a late carp on the tip – his trusty wafter doing the business as usual and Jim lost one at the net. It was obvious well before the end that Rob would be top weight but I had no idea regarding the lower placings. The weather was becoming horrendous, Mike had already departed and nobody objected when I suggested wrapping in 30 minutes early at half two. 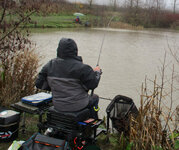 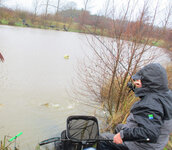 I’ve been amassing prizes for the last couple of months so everybody got a bottle of wine or spirits plus beer or tubs of sweets. Thanks to the generosity of Boland UK groundbait and my local Anglers Choice tackle shop everybody got between 4 and 6kg of groundbait plus a groundbait bowl and various other tackle prizes. 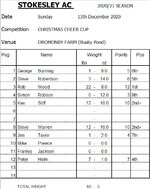 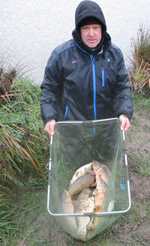 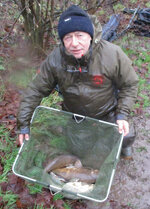 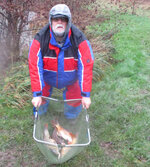 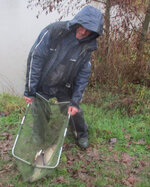 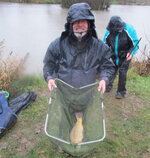 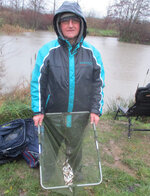 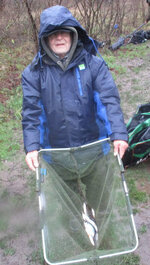 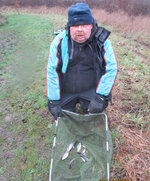 
That's it for 2020 - four more matches this season yet though - the first of which the January Shield will be held, surprisingly enough in January, currently pencilled in for the dolomite at Bowesfield but may switch to a stillwater if the river's out of sorts. 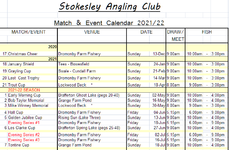 Good stuff, effort went into that report and in sticking the day through too.

Bit of a grueller but a good write up... Do you not fish the pike match any more?

Yeah we fished on the Tees just before the last lockdown, according to the lads who fish matches down there the river has been 'wick' with pike this year - however there was only two of us and only one pike caught - so it would have been a fairly brief report

Sometimes I sits and catches fishes #2