How do you deal with a 'washing machine' peg? By that, I think I'm using the term right, I mean a peg on a river with a swirling flow and possibly flowing in a different direction to the main flow, even sometimes with an undercurrent going in the opposite direction? It's a bit like this on the weir I fish. Do you just let the float swirl around?
T

Zerkalo said:
How do you deal with a 'washing machine' peg? By that, I think I'm using the term right, I mean a peg on a river with a swirling flow and possibly flowing in a different direction to the main flow, even sometimes with an undercurrent going in the opposite direction? It's a bit like this on the weir I fish. Do you just let the float swirl around?
Click to expand...

Give our NOTN a PM

Whirlpool. I get my coat.
S

Chances are there will be undercut banks and tiny little slacks. Time to get the bait dropper out and feed in these holes. I‘d fish a flat float held back hard, pole feeder or try and drop a decent sized bomb or maggot feeder into the quieter parts of the pool. Last thing I’d do is let the float wander about aimlessly. It’s rare that I’d fish this sort of swim. They would be left out in matches,,,,,normally and I wouldn’t choose to pleasure fish one. Very hit and miss but you must make sure your hookbait is close to some loose offerings.

smiffy said:
It’s rare that I’d fish this sort of swim. They would be left out in matches,,,,,normally and I wouldn’t choose to pleasure fish one.
Click to expand...

Me too one of those you just know to avoid

Best just to avoid them by the sounds of it then.

There are a few pegs on the faster parts of the Severn that are like this, where it's a fine line between having a slack and a crease and the water moving in the opposite direction close in if that makes sense. I am thinking more the real boilers like my weir though, I'd love for someone to come and fish it and see what I mean. What I've been doing is just casting out to the bits that look smoother and 50% of the time I'll get a half decent trot, the other half of the time the float will end up going the wrong way. What I've learnt from previous threads is that I should try heavy floats there and try to 'boss the river' so that's what I'm going to try. Got some 4.8g Bobber floats.

Before ruling out the swim i think you have to judge depth and pace of water and always remember that to a degree what's on the surface isn't an indication of what is happening lower down.

Given that pace and depth will give you an indication of what is causing boils etc and specifically where, they can actually be re-assurance that you are fishing below something that is serving as water break and is a potential feeding area.

Boils that constantly appear at the same time in the same spot and at equal intervals are a sign of say something fixed like rocks, ones that appear more randomly are streamer weed for example fluttering below the surface.

The only other feature mentioned that i would rule out, are back eddies and especially when they are emphasised in high water, as this is where rubbish coming down, will collect and swirl around. This is why, on this latter point, that i don't follow the rule of finding slacks in high water, unless they are parallel to some flow and not coming back on themselves.
B

To my way of thinking wherever you fish you need to present the bait among the feed and it needs to behave like the feed. I usually plumb around to find out what the bottom is like and if its a swim I am likely to fish again do a quick sketch when I get home marking depth and snags although this may change from year to year.
Its fair to say if the water is clear and not too fast loose feeding and floatfishing will work but if the river is a muddy torrent then bigger baits nailed to the bottom are a better bet. However I never take anything as gospel on the river and often go back and fish the same swim differently to see what might happen.

As above. Flat float or Pole Feeder. Or a bullet lead and roll your bait back towards you
S

Had me thinking about this. The only real time I’ve fished these pegs is in matches on smaller rivers and the pegs have been out and out Chub pegs. Obviously there’s been extra water going through but you just know the Chub are in the peg somewhere. They will probably be sitting somewhere different to their normal spot.
One match I was fishing right across with my float resting against nettle branches sticking out from the far bank. Peg was a mess but I reasoned that the fish will be hugging the bank. Two bites,two Chub but that’s all I needed that day for the section. Heavy rig fished overdepth and cupped in hemp.
Another time I had a tiny slack behind a tree stump,maybe a foot square of slack water. Again it was cupped hemp, nothing else, and had several Chub on the pole to win the match, 30lb odd I think. All from this little slack. It is a noted peg by the way

it wasn’t me doing anything mysterious to draw the fish. On other occasions I’ve caught Chub from pegs like this but, like I say, it’s been on smaller rivers and knowing the fish normally live there. I remember another match fishing a bomb on the pole to catch them.
This is one of those situations when a pole will outfish anything else in my opinion. So much easier to drop a bait into these spots.

Fish the edge of the flow past the boils unless it's bank high.

If it is bank high fish the feeder on the edge of the flow down the peg, other than a bait dropper it's the only way to concentrate the feed in one area.

If you try to feed in the boilly water the feed will be all over. By feeding the edge of the flow you have a better chance of lining the fish up and putting a weight together.

I used to love fishing swims like this, they are better in summer than winter. It's amazing what you can get in the white water even though you know your feed must be nowhere near it. Also there is no 'wrong way' for the float to be travelling, often in these swims fish will be facing the current even if it's going back on itself, fishing an eddy going upstream is fun. As is the white water, the float can be owned at times by the current yet still dace, chub and grayling can rip it under or do the slightest touch, no doubt a good bite but the angle of the float and resistance of the line can be poor leading to missed bites - strike at anything and quick! I've also seen weir pools where the fish have actually been standing on their heads as the current has being swirling on the bottom before going up, a weird sight

Interesting on being able to get bites with the float going the wrong way, I have had this myself on the weir, sometimes picking up decent Chub with the float just swirling around, makes me think something else is going on under the water...

Zerkalo said:
Interesting on being able to get bites with the float going the wrong way, I have had this myself on the weir, sometimes picking up decent Chub with the float just swirling around, makes me think something else is going on under the water...
Click to expand...

One stretch I fish reverses direction when the locks are opened on the lock channel on the other side of the island. Is really weird how it can go from flowing it’s natural direction to full reverse for a few seconds! Do sometimes get bites with it going the wrong way as well when the fish are really having it although generally nothing happens for the few seconds it’s in reverse so you have to wait for it to come back round the right way.

This Tulip shape is a good approximation of the flow there. The main flow being very fast on the surface with 2 or 4 big swirling eddies either side. 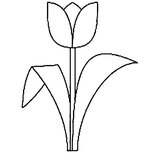 But what goes on under the surface may be very different to how it appears on the surface.
B

I think about this, and Mr Dyson, every time I peel the potatoes and throw the peelings away. I always swirl the potatoes around and watch the little pile collect at the bottom of the bowl in the centre. This is what happens to some extent to any feed thrown onto such whirlpool swims and was much my experience in fishing a swim just below from where it came out from a railway arch. I could try to fish with a float as much as I wanted or a lead - I got bites but nothing spectacular. Indeed if I fished with a light ledger, I sometimes picked up barbel and chub mid-water as it sunk. This encouraged me to modify some flat ledgers by adding some balsa to offset their weight in the water. Hence I could get the distance more easily with a larger bigger ledger and also the slow descent I was after. I found that my bait was taking a completely differing path through the water - I would touch ledger, and that strange as it seems, the bait would move back towards the bridge supports (which the heavy leads did not) - bites and catches increased considerable. So I put this to some extent on the Dyson whirlpool effect, of concentrating the bait in one spot - not easily done with a float.

When you empty the sink the water spins down the plug hole in the opposite direction depending on whether you live in the northern or southern hemisphere - strange but true!

I wander if weirpools down under have a different orientation as a result? I doubt it but it's gotta be a contender for bizarre thought of the day