Anyone been out this week having a look?

Just been down to a free stretch of small river near me and it's running gin clear as a result could see fish everywhere, must have counted over 50 barbel, but don't get exited folks the biggest looked around 4-6 oz, their peachy orange fins a contrast to the pure orange of the chub and the red of the roach. One shoal of barbel was 20 strong but took up less than a metre with two of the 'larger' fish sitting either side of a small rock not even having to move as the slow water was to the edge of the rock and not behind it, it reminded me of geese in their V formation as these two barbel just sat their on the deck with no effort whilst those behind the rock battled the current albeit with ease. Great to see so many small fish as there were also loads of chub, roach, gudgeon and the odd dace which stood out with their silver flanks. An old lady came by with some pellets she said was duck food but looked like trout pellets, naturally the fish absolutely mullered these, mainly chub and roach but even the barbel were up in the water interested such was the level of competition for food.

At the weekend I was wondering along the Thames which was running well with colour, a total contrast but still appetite whetting, saw some good fish top although the stretch I was viewing looked so different to the last time I fished it which was many years ago and was full of boat moorings where there was once bank. There was too much litter on both stretches of river despite it being the close season, picnickers, poachers and prats no doubt.

Walked 3 (new to me) stretches of the Thames last week with a mate. As you say it was running well And yes there were plenty of boats about.

one was written off, one looks quite promising and the other is only a maybe…..

Either way I probably won’t fish any of them till at least September/October And if I do it will be specialist ‘one bite’ fishing looking for a big chub or barbel.

Only been to the Teme at Eardiston (not many pegs there, very overgrown and steep banks), did not see any fish. And the Severn at Quatford, been there before for a walk but couldn't remember it, limited roadside parking and a bit of a hill but a nice looking stretch of river, a bit 'steady' compared to downstream Hampton Loade and Arley, only small fish topping but lots of nice looking pegs. Feels like we have only just started to have nice enough weather to make it a pleasant walk.

Not properly seen the Thames in ages and probably won’t see it before my first session of the season which will hopefully be the 19th although I’m not expecting it to fish well until the first weekend of July.

No but my mate is doing a damn good job at winding me up. He lives very close to the tidal Trent and tells me that Barbel are crashing about like crazy. Now one text would be fine but, most evenings.

I would be given half a chance, and helping the lads sort out the pegs ready for the start of the season

Sunday morning on the Windrush..

I had a good long walk along the Wye at Symonds Yat on Sunday, The river looks pretty good the level is about right and had a tinge of colour in it, however it was wall to wall canoeists, seemed to be many more than usual, maybe a consequence of lockdown and stay at home holidays. I know Symonds Yat is very touristy most of the time but it just seemed much busier than normal, I think my river fishing this summer might be more Monnow than Wye especially at weekends

I walked the Goyt in Stockport (Woodbank/Pear Mill) at the weekend. A little colour so didn't see any fish. Several rises though that gave me an indication where to fish when I get my new season card. One lad was out spinning but caught nothing. I'm looking forward to giving it a go for the first time in 6 years.
R

I might have a nosey down the Derwent this week. Just renewed my Pride of Derby ticket.

I did have another nosey down the canalised section of the cherwell the other day. Doesn’t look quite so appealing after the rain but should think it’s cleared again now so probably looking good again. Not sure if I’ll find the time to fish it though as whilst it’s maybe only 2/3 as far as the Thames it’s a long walk so by the time I’d got to the bank I could already be on the Thames for more guaranteed fish. 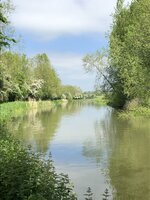 I stopped by my usual spot on the Worcs Stour on the way home from work, can't really call it a walk, but all two pegs of it. Been a while since I've seen it, since winter really, and it looks like there's been a bit of weed growth, especially close in on peg 2. Might get in the way a bit but the water could have been even lower than what it was come summer proper!

Last autumn on a lockdown walk, I found a canalised bit of my local river (which is fast flowing elsewhere) and badgered the controlling club until they gave me membership this year. So the plan is to go for tench on the 16th early in the morning. This week one evening I want to walk along and do a recce, then a rake and bait on the evening of the 15th, go home and sleep a bit (I won't because I'll be too excited) then rock up just before dawn and try my knackers off for a tinca.

Not had to chance to even look at my local rivers let alone get out fishing (obvs not on rivers yet). Hoping I’ve got some free time this weekend to get some fishing in and some riverbank walking. I’d planned to go and chop a swim out on the Dearne but I just don’t have time for it now. So I’ll settle for a mooch with some Polaroids and see if I can spot any signs of life. At least the rivers won’t be flooded for June 16th, makes a nice change!
R

Had a quick look on the way back from dropping Mrs at the station. It’s overgrown - 6ft high nettles all along but lots of signs of fish: in the picture, bubbles! (At 90 degrees for some reason) 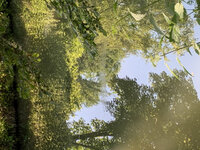 Went for a stroll down the local river Dearne yesterday morning at 6.30am. I bought some clip on polarising glasses recently so took them to see if I could spot any fish (and to see if they’re any good). The river looks beautiful, the glasses were okay, and certainly improved visibility but still a lot of white glare on the surface.

Anyway, I managed to spot three chub which I’d have ordinarily missed. Didn’t see any barbel on the gravel runs, and most of the river where I could see the bottom seemed void of any fish. Still, patience and perseverance is key on this little river, the rewards are lurking there if you can find them.

I've joined a club that has some good stretches of the Wharfe, ones that I've been eyeing up for a while

Most different species in a day.