So I’m spending this week in Christchurch for a bit of fishing away from my regular Thames haunts and after a couple days of dodgy weather and conditions I finally got some done fishing done today. In fact due to circumstances I ended up fishing two venues in one day which I think for coarse fishing is probably a first for me.

The day started well as the stour had dropped to a reasonable level and I’d bagged a decent swim or so I thought. Just before I tackled up at just after 7 a load of anglers turned up for match so that was that scuppered!

Plan B was a local commercial venue where I decided to plonk myself on the canal lake which apparently held chub and barbel so I thought I could at least pretend I was river fishing! I started about 8.30 on pellet and by 10 had literally just a solitary small skimmer to show for it so thought I better switch to maggot to try and catch a bit better. Tbh that didn’t do much better as by 1.30 I’d only added about a dozen and a half small roach and half a dozen small rudd.

It was not exactly thrilling and everyone else there was also struggling (unseasonably cold nights effect perhaps?) so I packed up at that point in the hope of getting back on the river after the match. To my surprise the match went on until 3.30 (8 hours is quite long for a match isn’t it?) but I did finally get fishing by about 4.30. I fished on until about 6.15 and had about a dozen roach and a couple dace of generally a much better stamp than I had on the lake so it very much saved the day and whet the appetite to go back out for out for a longer go at it tomorrow. Not sure how the match ended up but from the way it fished in the little time I fished it I should think double comfortably figures was needed to win.

Tackle wise I’d mixed it up from the usual 13ft acolyte ultra float rod and series 7 float reel combo as tbh I thought the river would be unfishable so had brought the 13ft CR10 #1 to deal with the commercial. That was paired with a 2500 shimano Sahara loaded with 3lb maxima. On the commercial I used a 2BB drennan visiwag set up to fish on the drop in about 5ft of water and on the stour a 6BB drennan stick to trip the bottom in about 7ft of water. Hook to nylon was a size 18 to 2lb 12oz kamasan b911 for both venues and successful hookbait a single red maggot over a pretty even mix of red maggots and hemp.

I’ll be back out on the river tomorrow morning if I can get a decent swim. Hopefully it’ll have dropped a bit more as whilst it was easy enough to trot the still quick water tonight with few anglers about but it’ll be a challenge when it’s crowded unless it slows up so might have to adapt tactics.

Only pic of the river from first thing this morning as neither the commercial nor its fish were very picture worthy and whilst the river and its fish certainly were picture worthy in the evening I’d left my phone in the van! 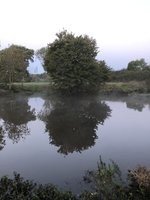 Looks like a lovely bit of river, hope you get on there tomorrow and have a good day.
S

Yeah is a nice river. Very different this time to when I’ve fished it in July and September in the past, it’s a fair bit quicker, dirtier and deeper! Looking forward to it in the morning just hope it’s not too busy as you can’t really short trot it in its normally state let alone how it is now like you do on the slower rivers so you do need a fair bit of room. Really is pushing through I hooked about a 3lb pike last cast and trying to pull it back through the flow was like trying to to do so with one twice the size back home.

Hi @Silverfisher looks like it's still up a fair bit there as it is here, the extra pace and depth does make it tricky and the chocolate colour the match might of turned up at 08:30 but I suspect it was fished 10:30-15:30. Hope you get a good days fishing tomorrow.
S

Fugley-fisher said:
Hi @Silverfisher looks like it's still up a fair bit there as it is here, the extra pace and depth does make it tricky and the chocolate colour the match might of turned up at 08:30 but I suspect it was fished 10:30-15:30. Hope you get a good days fishing tomorrow.
Click to expand...

The match lot turned up at 7 mate so they must have started within an hour I’d have thought?

It’s about a foot up on what it was last time I fished here and a fair bit quicker and way more coloured. Nothing like a couple days ago though as was a foot higher then and bombing through looking like boiling gravy! Amazed how quickly its improved. Still borderline unfishable on the straight bits but the swims on bends like the one I was on tonight are fine even for someone used to the steady pace of the Thames like me! It just will be difficult if it’s busy as whilst you can normally trot quite a short distance you had to trot a fair way today given how quickly it went through the swim so you’d be infringing on the next peg. If it drops a little and slows a little more overnight that would help!

Let's hope it drops a bit more for tomorrow, and that's a long match.
S

Reckon it’ll go down another couple inches. You’d have had very wet feet fishing where I was stood this evening if you were there a couple days ago!

And yeah I thought it long. Think matches at home tend to be 6 hours this must have been 8.