Last time out we were greeted by temperatures of -3C and a totally frozen pond – fast forward a fortnight to our last match of the year at Renny Lakes near East Harlsey in North Yorkshire and the temperature was a most unseasonal 9C upon arrival.

I had a healthy 14 strong field booked on, although Frankie didn’t bother – no doubt the prospect of leaving with armfuls of prizes dragged a few out of bed. I had two big boxes of tackle, bags of groundbait, tubs of sweets plus lager, cider, spirits and, heading a little upmarket from the usual Lambrini, a few bottles of Prosecco.

The deeper water pegs at the bottom end of the lake around the aerator – 8, 9 and 10 are consistently the best pegs on the lake when the weather gets colder – and the pegs on the south side of the lake adjacent to the car-park are always poor – so I concentrated the pegs on the opposite side. There’s only 16 pegs on the entire pond so I didn’t have a lot of room for manoeuvre. 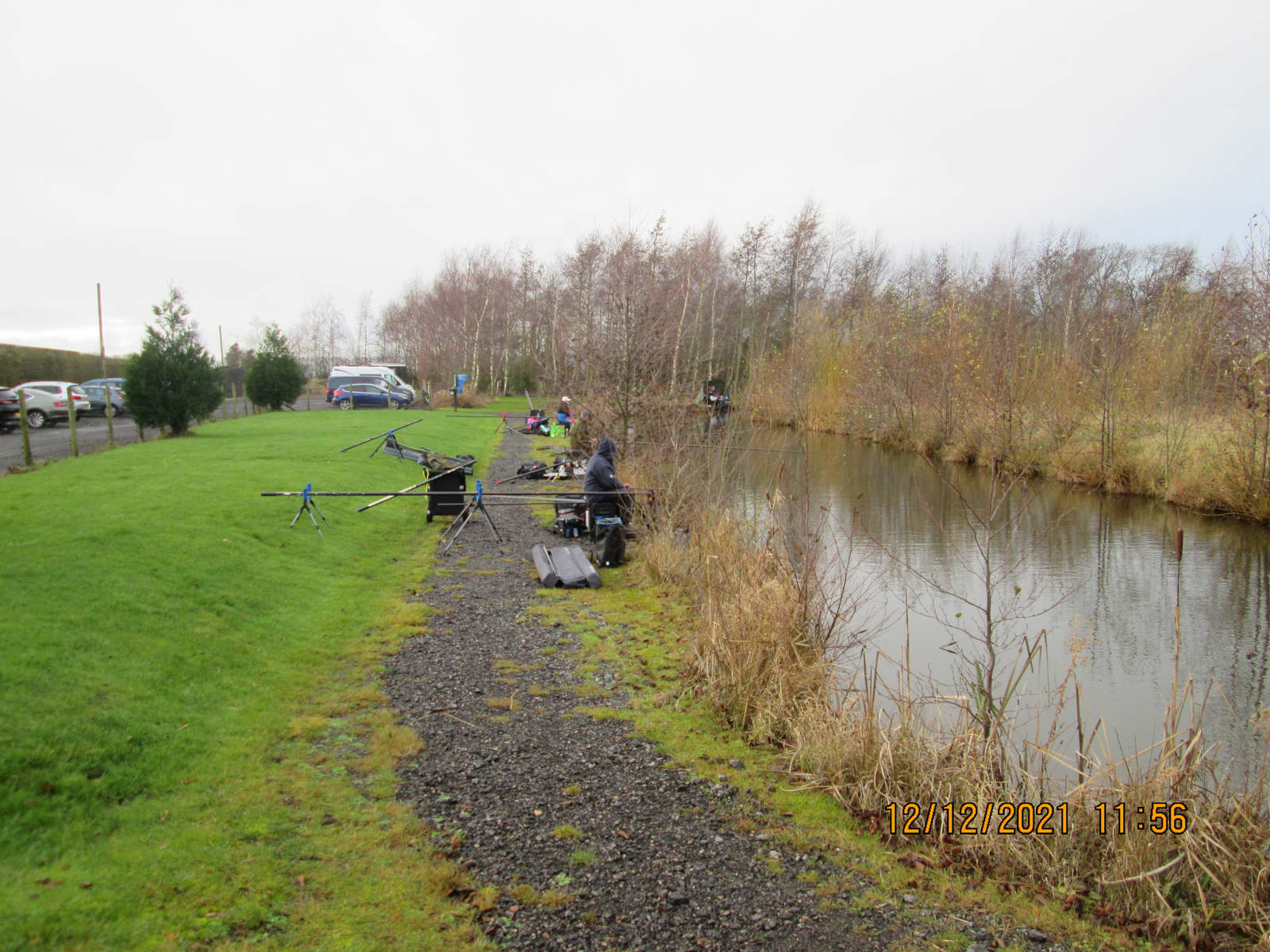 Barry wasn’t happy to pull peg one out of the hat (that’s the peg at the top end of the lake, closest to the gate) – he’d sat there for five hours last year without a bite. I predicted that George, Peter and Jim would fill the first three places – they’d pulled out pegs 8-10 respectively. It was only 36 hours since the last hard frost and I wasn’t convinced that the upturn in air temperatures would have increased the water temperature much.

I was on peg four which I have fished (and caught from) in winter previously so I was hopeful of one or two fish. Matty was to my right and his Dad Ian to my left, although due to bankside vegetation I couldn’t see either of them clearly. I didn’t bother with anything except the pole and plumbed up across to the island, down the middle and at the bottom of the marginal slope. I’ve never caught a great deal over by the island in winter – it’s only 18” deep for a start so I planned to leave it alone unless others started catching on that line or I got desperate. 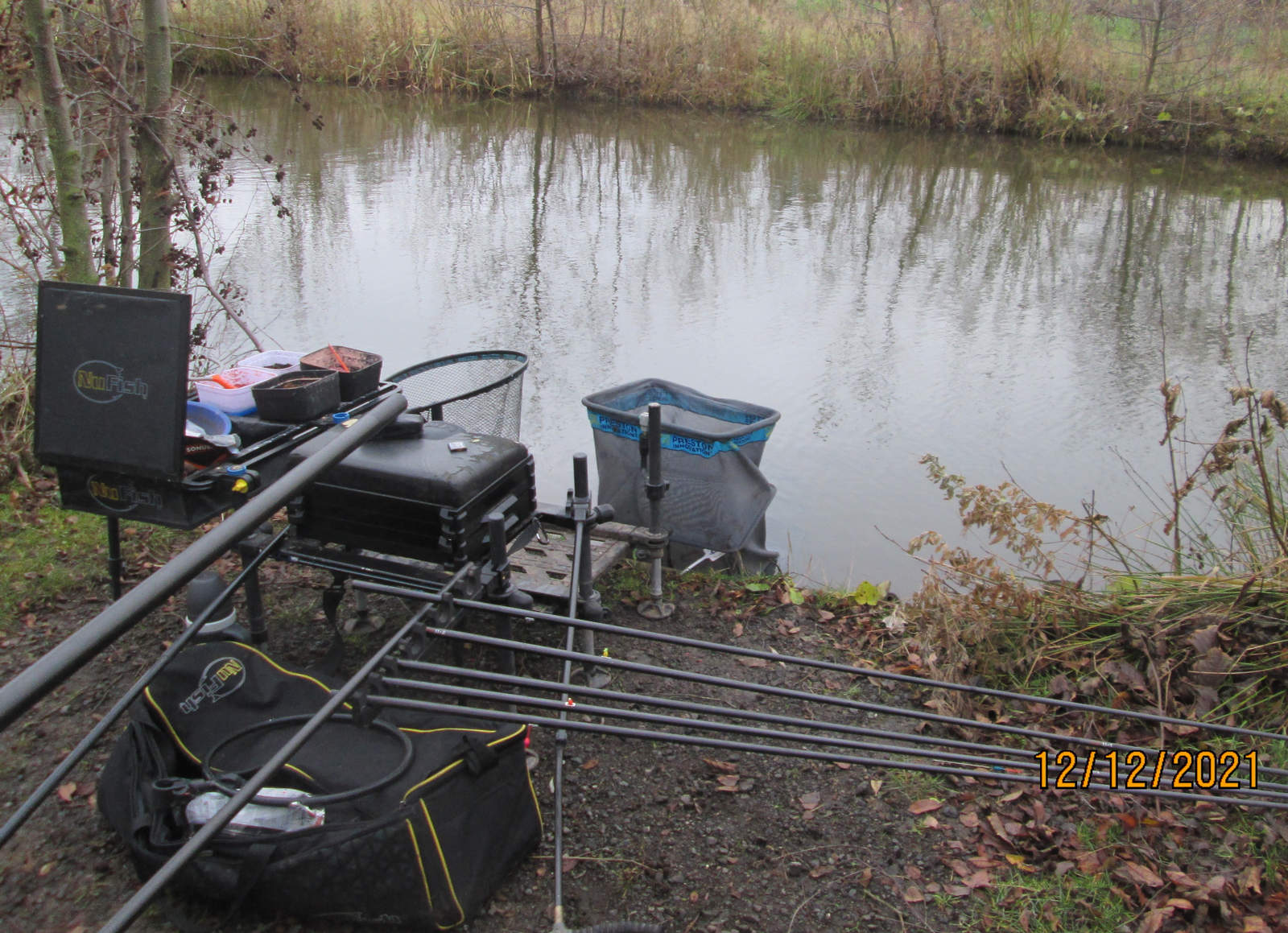 I started down the middle – about 6m – top two plus three sections – and just potted in a few 4mm pellets and a pinch of pinkies. Single pinkie on the hook saw me snare a very small roach first put in, single maggot got a slightly larger fish and double just saw me miss loads of bites. Sticking to single maggot I picked up odd small silvers – rudd & roach – until with about 30 minutes gone and shortly after whinging that all the fish were down the other end Barry hooked and landed a decent sized carp. Shortly afterwards I got one, as did Matty. By the time I got my second Barry had six and Matty was on, I think, three. There was nothing decent getting caught down to my left although I’d heard Kev catch one from the other side of the island and the bankside telegraph indicated Tink had snared a decent fish early on too. 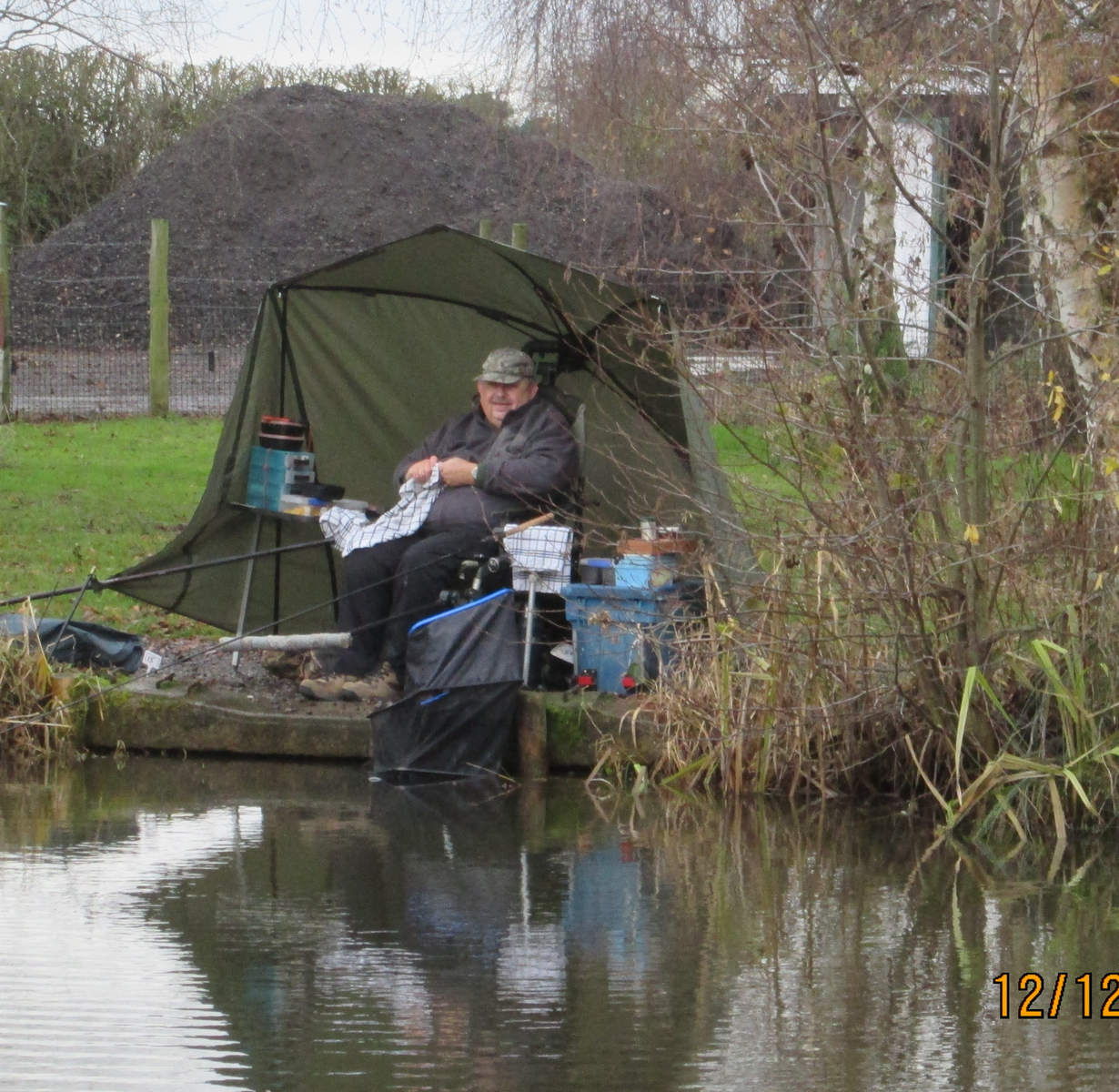 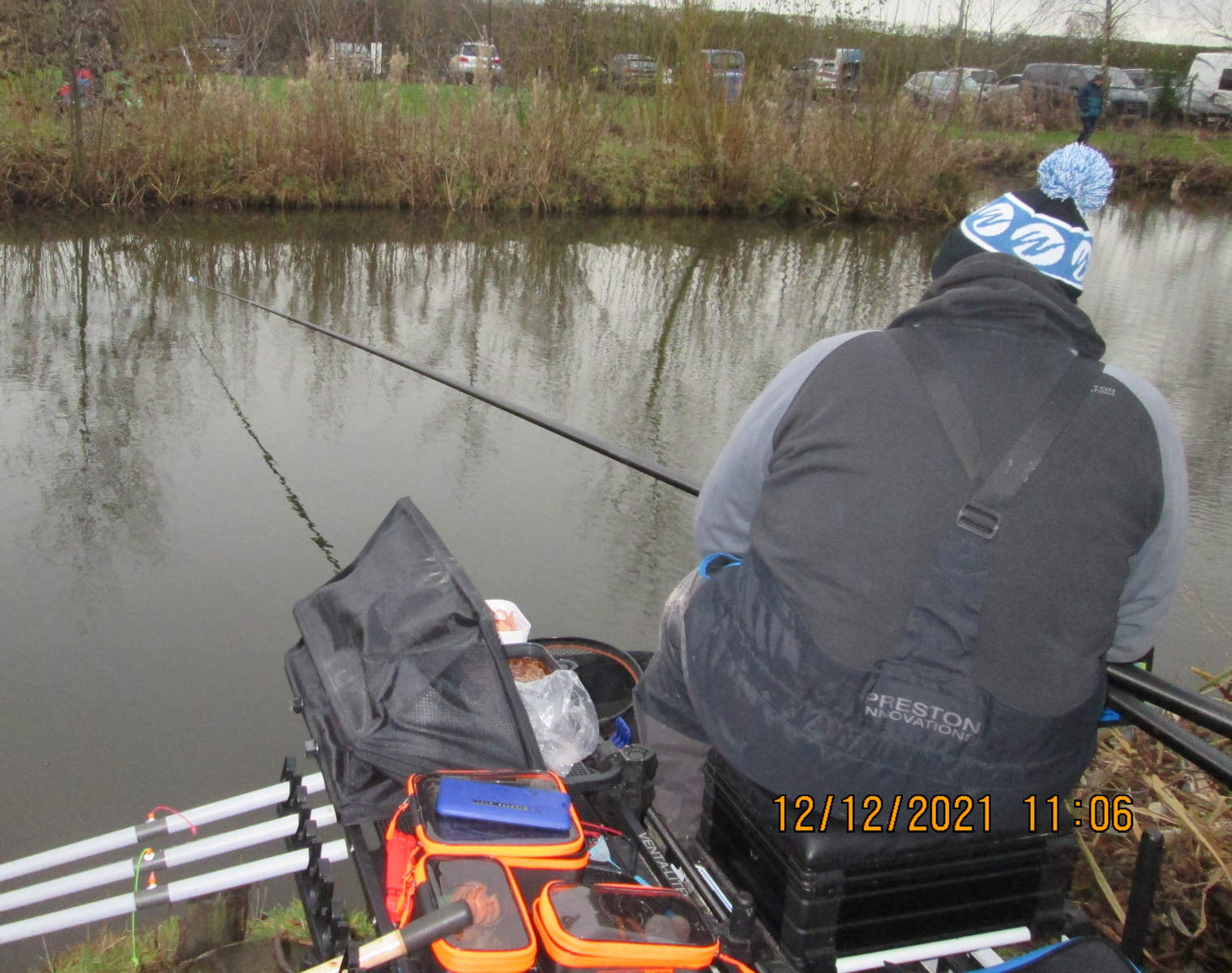 One thing that always appears to happen on this pond in winter is when the carp arrive the roach vanish – and since roach eat just about anything (I had them on maggot, worm, corn and pellet) not actually getting any bites isn’t always a bad thing as it indicates that either your peg is devoid of fish or it contains only carp. I went for a wander to see what else was getting caught and very surprisingly only myself, Matty, Barry, Kev and Steve had more than one carp – the five anglers at the top end of the pond. The anglers down at the aerator end had just silvers – the carp were at that end – Ian & Juliet fished it about three weeks ago and caught loads but they’d definitely moved. I kept plugging away – I thought I’d cracked it after potting in a load of chopped worm and getting a carp first put in. Sadly that was the only one and it was subsequently just silvers until a sudden lull in the bites indicated another carp had come wandering past. I think I was probably on the edge of where they were shoaled up. Late on Ian got a couple of carp on bread fishing tight to the far bank but it was too late for me to follow suit and the couple of looks I’d had over that line had only produced small roach and I’m not a fan of shipping 13m of pole too and fro for roach under an ounce. End of the match I had no idea who’d won – I knew Matty had the most carp but Barry had a few lumps in his net so it was likely to be close. I was hoping for around the 10lb mark – I had five carp and a couple of pound of roach.


Since Barry was on peg one that’s where we started the weigh-in and he dropped 53lb dead onto the scales. That’s the second best weight we’ve had from Renny – only beaten by the late Bob Morgan’s 55lb 6oz from a partially frozen pond in January 2020. There was a bit of a gap before Steve W on the next peg – as I mentioned right at the start the car-park bank is usually rubbish so I left some big gaps. Steve was the only angler to catch almost all of his fish across to the island – Barry, Kev, Matty and me all fished at the base of the marginal slope or down the track at 6m or so.
His total of 29lb 12oz was good enough for 3rd spot Kev might have got third himself if he hadn’t managed to lose a few - 25lb 8oz was a clear fourth spot though. It was certainly a different match from that which was anticipated and I presume it can only have been the milder weather which persuaded the fish to move from their usual winter haunts.

Great report Simon. Catching 53lb of carp in December is quite something. A few good bags there.

Another Cracking read Si. Thanks for another good day!

Simon …. Do you work for angling times ? You do some right reports you do. Brilliant pal. As always …. I enjoyed reading that. The lady with a cig in her hand reminded me of when I weighed Frank Barlow in and I burnt the back of my hand on his cig nearly dropping his fish in the weigh sling.

Great read as always Simon.
Happy Christmas to you and all the members of Stokesley AC.

Bit of a grueller at Grange Farm

Just out of the money

Nightmare on the club lake

Normal Service Has Been Resumed