Tucked away and almost forgotten about.

Dave Spence said:
That's a sign of age mate, the retrieve is fine it's just your wrist that is slowing down.
Click to expand...

Are you trying to say that over the years Mick's worn his wrist out?

Peter said:
Are you trying to say that over the years Mick's worn his wrist out?

Exactly, but I don't know how he could have possibly done it

Another item of tackle that I’ve recently found that I assumed was long gone years ago! 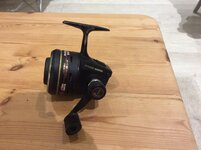 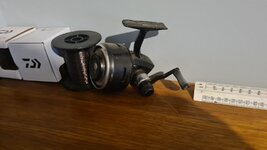 Dave Spence said:
That's a sign of age mate, the retrieve is fine it's just your wrist that is slowing down.
Click to expand...

. I can’t argue with that. You’re right pal.

Total said:
That thumbwheel on the 120m handle could do with a clean though our Peter....
Click to expand...

Blimey Peter the Drennan canal grey, compalite and zoomers took me back.

I don't have any old kit from before, having only starting back 4 years ago or so, although have managed to pick up a Abu Cardinal 55 in vgc.

@Peter I've float envy, care package for the fugley one

I don't have any old kit from before, having only starting back 4 years ago or so, although have managed to pick up a Abu Cardinal 55 in vgc.
Click to expand...

Just the word ‘ Zoomer ‘ makes me feel old Kev. Along with onion. Were we on drugs back then when we named float patterns ?

Peter said:
After reading @Silverfisher 's post "How much tackle you got" I wondered just how accurate some of those lists were. If like me you've been fishing for a good few years there's probably a good few with stuff tucked away that hasn't seen the light of day for a good few years. Bit's of kit that you meant to move on but never got round to, stuff that just got relegated as your style of fishing changed.
I'm not talking rubbish bits that didn't do their job and deserved nothing but the bin but perfectly serviceable bits and pieces that maybe just went out of style of got superseded by the next latest/greatest must have that we are all susceptible when we wander into a tackle shop for a pint of maggots and come out of there only to find that we have somehow parted with considerably more than the cost of that original pint of maggots.

Anyway this morning I'm putting some stuff up in the loft for Mrs M and out of the corner I spy a box marked "Odds & Sods", it's been up there since we moved and as It's an old box was probably packed long before we moved anyway. Yep you've guessed, bits and bobs of tackle amongst the other stuff in there.

Exibit 1 your honour, a Daiwa 120M closed face reel, put away in it's pouch in gawd knows when along with a spare spool, but the line might just need replacing.......... 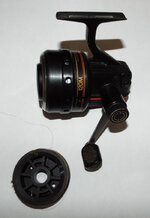 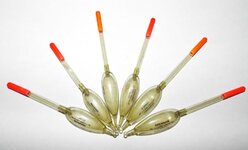 Drennan Carp Crystals that probably made way for Pellet Wagglers 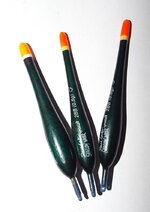 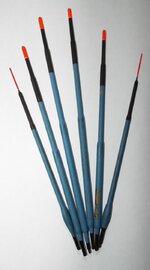 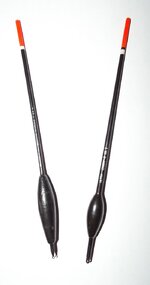 Drennan Zoomer and an Ultra Onion 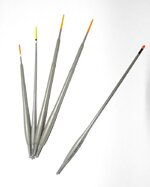 Billy Makin Greys
​
All of the above forgotten about as time has marched on but some of them will definitely be coming out of retirement in the months that lie ahead.

Looks like the contents of my tackle box.I use the Diawa 120M for everything.Would be lost without it.

Here's my contribution - a 507, an almost empty spool of 6lb Korum feeder line and a spare spool for a Caldia 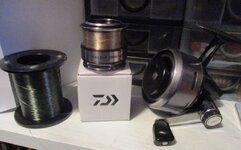 I knew where the 507 was but I've just found a whole bunch of spare spools and spools of line in a Drennan Visi-Case that was pushed under my desk.

I've got a couple of 501's and a 506 (all with original boxes, tools, paperwork) which haven't seen the light of day for c.30 years. I recently bought some shallow spools for them as I have plans for them next summer involving dace up in the water and also trout / grayling on small streams
D

My problem is the opposite, rather than hang onto kit I don’t use, I’m always in a rush to either sell it or give it away (to local kids fancying getting into the sport)...

Had a look yesterday at what rods reels and poles I’ve owned & off-loaded over the last 10 years, and it was staggering!

But there are some I specifically keep for nostalgia, including Abu 501’s, 506/m, 1044’s but also have some lesser known reels that I originally owned as a youth.

That Daiwa 120... used to have one of those in my collection, one of the very few bits of Daiwa kit I liked...!

1657 are great reels, had mine since they first came out.
T

tipitinmick said:
Picking fault with head moderators 120M = £25,000 fine and put on report for one week.

I bet our Peter will go out to the tackle room/garage etc and clean the handle though Mick.....Peter sets high standards of cleanliness for his fishing tackle and it's great to see/appreciate when hard earned has been previously spent.....I'm exactly the same......

Total said:
I bet our Peter will go out to the tackle room/garage etc and clean the handle though Mick.....Peter sets high standards of cleanliness for his fishing tackle and it's great to see/appreciate when hard earned has been previously spent.....I'm exactly the same......
Click to expand...

Wise Owl said:
The Spanner he Teks on matches to get the new quid coins outta Daves Grip is Gleaming
Click to expand...

Every time I open a drawer or a cupboard I tend find something fishing related even if it is just a packet of hooks or a float as Kathy hates to see anything on on work tops etc so puts them in drawers or cupboards, I must have a plummet in every drawer in the house and can never find one in my tackle box. Also when we moved house I stored some kit I didn't use very often in Kathy's parents garage to keep safe during the move, they have since moved house also so it is anyones guess what is there or even where it is..!!

Total said:
Aye, and our Dave's allegedly got some grip......
Click to expand...

Where did that come from?
2