Another reminiscent trip I made yesterday. Like my last write up, I used to fish this a lot as a kid. It's on the KLAA ticket which I recently renewed for £70 which is quite frankly a steal. This place used to be full of Carp, with a good head of Bream. The matches here used to be insane, I'd never fished them but I'd visited the pits on match day and remember people sitting besides crates of sweetcorn and big, big winning weights

Has anything changed? Let's dive in.

I got a lift with a buddy yesterday. I was told to massively scale down to fit all the gear in the car so I took my Sensas 325 feeder seat box, rod holdall, Pole, 2 top kits (rated 6-8 & 10-12), a 9ft feeder & a bait bag. I'll be honest, I wasn't and never am confident scaling down and not having all my gear with me, I also didn't like the fact I couldn't take my new S36.

Anywho, We arrived and we chose a couple of pegs, Pretty open water with a line of patchy lillypads about 20-25m across from us. (See bream pic, Sorry forgot to take pics) There was an older fella across from us free lining bread with heavy carp gear bang dead in the middle of the lillypads. I didn't initially realise what he was doing but when I noticed, I was pretty concerned as I didn't want him smashing up the lillypads which would in turn potentially have a ripple effect on my peg where I was aiming to shoot my feeder. I'll be honest, I'm not sure why some places still allow these cheese tactics. It simply cannot be healthy for the fish to be bullied out of 10m of lillypads with size 8 hooks and 20+lb line. I have absolutely no doubt that this is why the lillypads were so patchy also as apparently a lot of people apply this tactic on this particular water

First course of action was to set up my box, Then I quickly threw up the feeder. I wasn't throwing far so I went for a 20g Guru Hybrid. Usually on Bream venues I'd opt for a cage but I'd been tipped off that the place reacts better to micro's. I fished up tight to the lillies quite far left of my peg as I was going to fish pole at 12M directly in front of me and I didn't want fish running through that line.

While I was pulling out my pole I was casting in between, Every 3 or so minutes loaded within a pinch of micro's to build up the swim. I had quite a few liners, some knocks and eventually landed my first bream / skimmer. Not big, about 2lb. I went for an F1 Pellet bulk rig on the pole, 6lb main with 5lb bottom with an 18 Matrix MXC-2 to start off. I find this size is just about big enough for corn, expander & while it's a little bit on the bigger side, I can get a feel with two red maggots while having enough strength if it's going to be a carp dominated day. I went with the 10-12 kit those lillies in front of me simply wouldn't allow me to use a 6-8. I plumbed up to find the bottom was pretty even so I plumbed quite far up the bristle. Started off with 2 tennis ball sized balls of groundbait, And some dead red maggots and left that line to stew for an hour.

I sat on the feeder for that hour, And while I landed another couple of bream it just didn't feel right at all. The bites were so far and few between, And when I was getting bites they were just so, so delicate. There were plenty of fish topping deep in the lillypads, Big carp too but they just didn't seem to venture out. I was however getting a ton of liners, which told me there were quite a few fish closer in, In more open water.

This is when I decided I'd given the pole line enough time. It was also at this point I noticed I'd forgotten my pole cup, so I'd put 2 holes in each side of one of my pole butt caps and fitted that on my pole

I gave a few loose offerings, a small pinch of dead reds and fished double maggot over the top. First throw, Bream. Second throw, Bream, Third throw, Bream, fourth, Bream all while feeding very little, but quite often. I didn't introduce anything but nuggets of groundbait and a few dead reds at this point. I eventually hooked into my first carp, And landed it. Not big, About 4-5lb with hands down the worst mouth I've ever seen, The poor bugger looked like a sturgeon. I had one or two more skimmers and roach after this, But then things quickly went south. All of a sudden, I had a stupid amount of fizzing in my peg, but was getting little to no bites at all. I sat like this for about an hour scratching my head. My first course of action was to simply try different baits, corn, expander pellet,banded pellet... Nothing worked. The next course of action was to scale down on the hook length. I went to a 3lb length with a pole special, sized 20 with a single maggot and again, Nothing. Last course of action, add another half section. This thankfully revived my peg a bit, Fishing out of all the fizz really did produce a few more bites, Albeit slowly but I went on to land a few more bream and a couple of roach. This has happened to me a couple of times on different venues while targeting bream now, I'm not really sure what's happening but I've just come to the assumption that theres too many bream in the peg stirring up the bottom making it a chore to get a bite.

While fishing out of the fizz did pay off, The bites did eventually come to a halt. The fizzing was still there, But the bites were few. I'd opted on coming in a section to see if that'd produce, But it did not. In the end I decided I'd rest the pole line entirely but finally introduce something other than groundbait and maggot. I grabbed my cupping kit, filled it with blitzed sweetcorn, cupped it in directly over the fizzing and went back on the feeder.

Long story short, The feeder produced 1 snap up, And one or two more fish. The whole venue just seemed to have switched off at this point.. In all honesty everybody was struggling. My buddy beside me at this point hadn't even had a single fish. The guy across had a single carp, And had long packed up (Thankfully), The two guys behind me didn't seem like they had much and the other two across the bank weren't doing much either. That's all I could see. That was totally fine with me though, As it gave me about an hour to relax with a cuppa, some candy while having a chat and a laugh with my pal beside me.

After a while, I'd noticed that the mass amount of fizzing had calmed down and it seemed very approachable once more on the pole. Don't get me wrong, There were still bubbles, But it wasn't a riot. I'd decided to fish over top of this again after introducing another half cup of blitzed corn. I fished a single shell of corn and the fishing was good. Not great ill admit but it was slow but steady fishing. This continued throughout the day. Again, feeding very little but often enough to keep the bites coming. I hooked into another carp on the pole which snapped me off but kept plugging away at the bream. 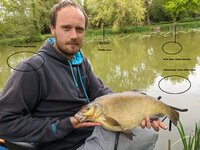 Throughout the day, I'd been lightly feeding my left margin. two or three pieces of corn here and there. In all honesty, I didn't think anything would come of it but it's something I always do regardless. This margin looked dead though, literally a single ball of reeds one top kit out is all I had before I hit open water as my peg was awkwardly placed. As the day was drawing in I was 100% sure I saw the smallest swirl ever out of the corner of my eye. I was already plumbed up, on my 6-8 elastic kit, with my crude 5lb main, 4lb bottom rig. A disaster waiting to happen, I know.

I sat on it for about 10 minutes and I started questioning myself before my float shot under, I struck and missed. That confirmed there was something there however. I sprinkled a light offering of blitzed corn down there and sat on it for another 10 minutes before the float disappeared again and I struck, And immediately realised I'd hooked into Godzilla with gear capable of bringing in bream. 10 or so minutes later, I landed a nice common. It weighed in at 14lb and 5oz, Not a massive fish by any means but the biggest I've caught in quite a while, And on the gear I caught it on I was pretty chuffed. 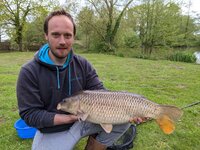 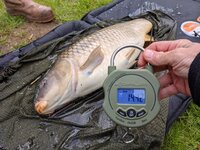 That carp completely killed / smashed up my swim however. I had more more bream on the feeder and not long after we both packed up.

Finished covered in slime, smelling of Bream with around 15 Bream, 2 Carp, Some skimmers & roach to my name, All in all, Pretty decent day.

If I could change anything that I was in control of I'd have switched from a hybrid feeder to a small cage, I'd have also fished my clip in more open water on my left and built up a separate swim while also having that lilly swim on the same clip giving me two options on the same feeder. I think I could have produced a lot more fish if I'd have done this. Next time I visit I'll also pot groundbait and not feed any nuggets thereafter, as I'm confident the groundbait was the problem on my pole line.

Below are a couple of pictures from the day, As well as a decent idea of my swim.

Enjoyable day on a new venue.

Fun in the sun.