Why does Spam, Bacon grill, Corned beef come in such stupid bloody Tins ?

what Knob thought those daft keys up ?

Some French geezer invented canned food in response to Napoleons call, and only the military could afford cans at the time and had plenty of sharp things to open them, during the 19th century as they got cheaper and thinner most cans came with their own little key to peel open the top.
It was 150 years until the yanks invented the can opener we recognise today.

The trapezoid shape (on some makes) with no lip, will make it easier to remove the contents and, if it wasn't that shape, it wouldn't fit the shape of the meat inside it.

the same man as invented the plaster.

Those daft keys have saved many a days fishing.
As for shape of tin, military already mentioned.
Them tins fit nicely in various pouches and are right shape to heat up in a mess tin.
We used to boil up water in the mess tin for pasta/rice etc whilst heating up a tin of meat in the hot water ar same time. Saved fuel and time.

Talking about the Daft and Barmy who remembers these 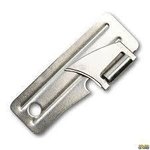 I had one of those in my shakey box for years. Brilliant tool.
T

@Dave Spence ......All settled in nicely Mr Spence in your new abode?

Penknife or multitool with one of these does the job perfectly well.

As an aside - my uncle was a chef in the merchant navy and he said they never used a can opener. They would hold a chefs knife point down over the bucket sized catering tin and whack the handle down with their palm, piercing the lid. Subsequent whacks and moving the knife around cut a crescent shaped slit which could then be bent up to get at the contents.

Got one in my session kit, use it all the time.

I was watching a programme on TV, possibly a how it's made type, and found out food tins are crimped shut, not welded/soldered

If the tin wasn't that shape then the meat inside wouldn't be that shape and it wouldn't fit into my MAP meat cutter. Don't complain.

Still in quarantine mate and waiting for the purchase to complete.
W

Dave Spence said:
Still in quarantine mate and waiting for the purchase to complete.
Click to expand...

Are you learning the lingo Dave ?

warrington63 said:
Are you learning the lingo Dave ?
Click to expand...

A bit mate, apparently I am the "head off my dad" and last night I was "langers"

I usually end up taking a tin opener to em Mick, they do my head in!

rudd said:
Those daft keys have saved many a days fishing.
Click to expand...