Due to the bright, sunny weather forecast for the next few days I decided to have a day on Monks Lode after the tench.

The forecast was sunny until 0800 and then overcast with a moderate, warm northerly wind until about 1700 When it would get bright again.

I arrived at the water just after 0600 and settled into my chosen swim. I like this swim because the large bed of water lilies on the far bank gives a feature to work around. It also gives good shelter in a northerly wind due to the high bank behind. 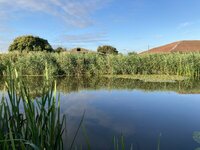 I fished the waggler with corn and bread punch (as usual) about 2/3rds of the way across in about 7ft of water. I soon started getting bites but it was all small stuff, mainly skimmers which is unusual here in my limited experience, as it’s usually the rudd who are the culprits.

To get away from the skimmers I shortened up and fished very close in, just over the nearside bank lilies and was very quickly rewarded with a nice 4lb tench. 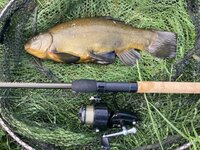 I’d promised myself previously that I’d move swim after catching a tench as they always seem to dry up after the first. Shamefully, I just couldn’t be bothered as I was comfortable and enjoying the swim and ended up not moving all day, even though no more tench were forthcoming. 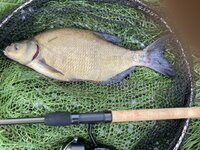 Surprisingly, this was to be my last fish of the day even though I carried on until 1545 due to the lovely warm, overcast conditions.

Something that occurred to me as I walked back along the bank to the car is that it had only taken me five minutes to pack up and get to the next swim that I should have moved to. Must try harder!

The Fens - A Little Slice of Tench Heaven

The Fens - Where are all the Baby Tench?

Opening Day on The Fens