The Fall of an Icon in the Teifi

Flowing through the Teifi Valley, the River Teifi is one of Wales’ longest and most quintessential rivers. Providing a route of passage for iconic species like salmon and sea trout, it is a tranquil haven for wildlife and a favourite spot for many anglers.

But the Teifi has a secret. The latter of these fish, the sea trout – or the sewin as it is known in Wales – is suffering a dramatic decline in numbers. In a new report, River Teifi, West Wales – Sea Trout Demise and Stock Overview, Steffan Jones lays out the evidence and calls on the Welsh Government to urgently revise their management in order to secure the future of sea trout in the wild.

New bylaws were introduced this year by Natural Resources Wales with the designed intention of reversing these declines through strict restrictions on what anglers can catch and keep. But the efficacy of this whilst netsmen can continue without limits appears to be questionable. It seems anglers are doing their bit for the conservation of the precious sea trout stock, whilst others go unchecked. For the fragile sea trout population in the Teifi to experience a much-needed reprieve it is paramount that Natural Resources Wales phase out coracle licences and netting altogether, or at least reform their management.

12 years ago, the Environment Agency launched a plan entitled ‘Better sea trout and salmon fisheries – our strategy for 2008-2021’. Despite their intention to achieve self-sustaining sea trout runs and a higher abundance of sea trout by 2021, nothing has changed, and the species continues to experience steep declines. Within their report, the Environment Agency claimed that conserving sea trout genetic diversity within their home river environment was of paramount importance; however, netting targets set by Natural Resources Wales target a very distinct genetic group, weakening genetic diversity within the population. 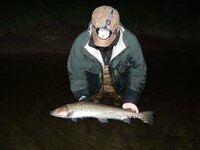 In the Teifi it is reported that 90.8% of returning sea trout are those that have not spent their winter at sea before returning to freshwater. Why does this matter? Because as these sea trout are not sexually mature, they will not spawn, sparking deep concern for the repopulation of the stock. As a result, The River Teifi is extremely reliant on multi-winter fish for recruitment. This balance is fragile and is not helped by the current no catch limits and no size limits for netsmen. It is simply not sustainable.

Given that Natural Resources Wales too has recently invested in ‘Fishing in Wales’ to actively encourage angling tourists to the country, and that the economic benefit of angling tourism far outweighs that of net caught fish, it is perplexing why netting management reform hasn’t happened. After all, more and bigger fish would attract a larger economic benefit to the local rural economy. The current management strategy doesn’t foster this.

“If real change is made and implemented our fishery can be transformed almost as quickly as it has decayed, especially with the multi-spawning nature of sea trout and the efforts made by angling clubs as true custodians of this precious resource.” writes Jones.

For a prosperous future this emblematic species desperately needs the present risks to their stocks to be dramatically reduced and measures must be put in place to protect diversity of sea trout in order to increase their numbers. A rapidly declining population with reduced genetic diversity spells disaster for this symbolic species. Wales’ sea trout fisheries are at a crossroads. Never in their history have they been so poorly managed or been at such a high risk of collapse. But if appropriate action is taken in good time, then the future of these beautiful fish can be salvaged.

The Angling Trust supports calls for Natural Resources Wales to reform their management plan for sea trout to not only protect the historic species itself, but also the enormous socio-economic benefits that it provides for generations to come.

You can read the full report here.

Sounds like same scenario as pleasure fishing for bass, bans and limits on recreational anglers whilst commercial fisherman rape the rivers and sea ?

By Design or By Accident?

Fight to save angling on Admiralty Pier