Due to weather and river conditions, today was my first time out trotting for a spell. The has dropped right down and had about a foot on it's normal level so ok in that respect, but, a friend phoned me and told me the river temp's were dropping and had dropped from 8+ yesterday to just above 6 today. Rising temp's are good, but dropping not good. So with the dropping water temp's, clear skies and glaring sun I wasn't expecting a lot of action. Anyhow, after a few trotts through I hooked a fish and as I was playing it back up stream the hook pulled out, shortly after that, exactly the same thing happened again? I removed the hook and replaced it with a sphere beast and walked along the banking about 70yds (the end of my previous trotts) and proceded to trott there. First trott and I hooked something large, but after playing it for a good half a minuite the hook came free again!
Next trot and I hooked a snag. I had to get hold of the line in my had and walk up the bank until the line broke. Or the hook pulled free. Usually the hook bends open in this situation when using my favourite drennan superspades. When the line pulled free and I wound in I was surprised to see the hook had snapped clean off at the bottom of the shank?
I used the sphere 13ft 6inch spliced tipped rod today and the rod has grown on me a lot, it's a belter and I wouldn't hesitate to recommend it to anyone after a spliced rod. I would go as far as to say the rod is in a league above any of the previous spliced rods I have ever had over the years!
Anyhow, I think that nonsense will have you yawning by now so i'll just say, after re-tying anther hook I landed everything I hooked from then onwards.
I'll post a pic or two later for anyone interested

I couldn't add any pic's to my post as it had timed out, but here's a couple from the day.... 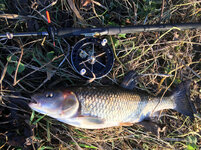 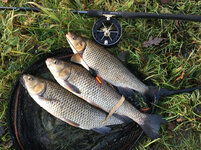 The reel is a youngs river specialist, a very nice reel to use and has an adjustable drag similar to thw barbel reels Garry Mills also makes.

Lovely fish again. I’ve said it before and I’ll say it again but coarse fishing doesn’t get much better than catching good sized chub trotting.

Its never made any difference to me what handle is made of,
on any of my rods, if rod feels right then im happy.
T

Silverfisher said:
Lovely fish again. I’ve said it before and I’ll say it again but coarse fishing doesn’t get much better than catching good sized chub trotting.
Click to expand...

stikflote said:
Its never made any difference to me what handle is made of,
on any of my rods, if rod feels right then im happy.
Click to expand...

To be honest, I wasn't really interested in the sphere rods in the slightest, and the handle did look a bit strange to me in pictures. I had never seen one of the sphere rods in the flesh and I wouldn't normally get a rod just on someones recommendation. Anyhow, I know that Sam Vines knows a good rod when he sees one, and so I got one on the strength of his recommendadtion of it....i'm glad I did !
Y

Some nice Chub there.
I was out with a Mate yesterday, me with a river specialist and him a Sheffield.
River was a bit low and clear, and all we could muster were a few small Chub to about 2lb and a solitary small Roach.
Nice day to be out, though.

Santa is ahead of schedule apparently

(Apologies to @Arry as he’s seen these already). 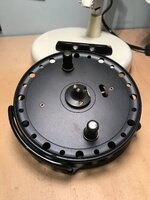 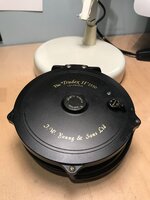 Cor ive got two them, then i woke up

do they still make those?? ,i had a quick look on Youngs website the trudex is not shown
Last edited: Dec 18, 2021

Don't think the Trudex or Rapidex are made any more... I have a boxed Rapidex II not as nice as Alan's Trudex though... 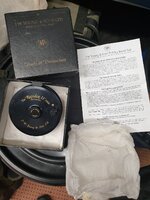 Been some nice pieces on the Bay this week. A 6-spoke Match Aerial went for £91.

Alantherose said:
Been some nice pieces on the Bay this week. A 6-spoke Match Aerial went for £91.
Click to expand... 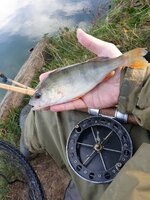 Spins well, s'all I'm worried about... my gear gets used, not stuck in a case or on a wall

Arry said:
Spins well, s'all I'm worried about... my gear gets used, not stuck in a case or on a wall
Click to expand...

Never understood the urge to take beautiful engineering and not put it to use, whether guitars or fishing reels!
S

Alantherose said:
Never understood the urge to take beautiful engineering and not put it to use, whether guitars or fishing reels!
Click to expand...

In my case it’s simple; I’m quite good at fishing but totally rubbish at playing the guitar !

So my two guitars stay in their cases and just get fondled occasionally.

squimp said:
In my case it’s simple; I’m quite good at fishing but totally rubbish at playing the guitar !

So my two guitars stay in their cases and just get fondled occasionally.
Click to expand...

I dare say you won’t improve if they stay there Squimp!

I have the old trudex and rapidex, really don't like em though. The trudex is the better one imo due to the fact that is has a bickerdyke guard and not a full caged drum as the rapidex has.
I have used them but not very often... 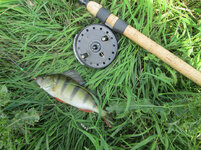 I just keep clean them with a wet one then wipe em over with a tissue to get the water off after a days fishing and they stay like new. One of my tricks is to hold the reel infront of the blower in the car when it gets warmed up on the drive home. I hold it until the reel gets hot in my hand and then I know any moisture will evaporate from the reel....works for me. 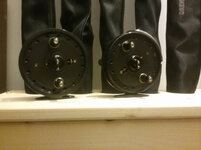 ) allcocks match aerials. Although there was a little twist in how I came to have three. My first one did get a lot of use and was my favourite reel for a while. I had literally hundreds and hundreds of barbel with that old match aerial, including my first ever double on the float.... 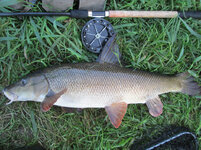 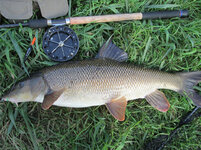 My mrs found a brand new one in it's own red box, all be it a little crusty, in another box and in an old suitcase which was thrown on a pile of junk that had been thrown away as people left a car boot sale! She said there was always a group of people rummaging through the stuff which was all taken to the tip after the sale every week. She was more bothered about a wicker ottoman she was struggling to carry and had been after one for a while, than the reel and only picked the reel up because it was fishing related.
Strangely enough I had just bought a brand new one that hadn't arrived when she found this one,. So I kept the freebie and new one and sold the old one.
This is the reel my mrs found in the junk... 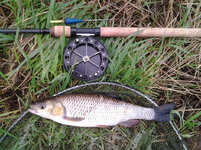 Alantherose said:
I dare say you won’t improve if they stay there Squimp!

Give me a complete beginner fisher person and I could get them pretty competent in a year. I had a year of guitar tuition and still can hardly play a note ! And I can’t keep time. A lost cause unfortunately.

Best get my centrepin out and see if I can still get a tune out of that.