The Blessing & The Curse

Homeschool got a bit much this morning- tempers were fraying and fronted adverbials were getting hopelessly muddled. ‘That’s it, we’re going fishing this afternoon!’ I said to the lad. I had some work to do, but it could probably wait until tomorrow. Quickly prep some micros and get a handful of 4mm expanders started, chucked box, bag and feeder rod in the car, and we were off (after a quick sarnie).

Arrived at Layboure lakes complex in Hessay (on the York DAA book) to find only a couple of other cars in the car park (nice). Brisk westerly wind, lovely and mild (really nice). Favourite swim free (get in!) Our previous two sessions here were blanks (too soon after the big freeze), but I had high hopes this time.

Set up the feeder with a small method and clipped up as tight as possible to the opposite bank which is about 13.5m. Feeder loaded and a couple of 4mm expanders hair rigged in a nice bundle of tasty goodness. First chuck on target and settled down to wait for ten minutes. Nine minutes later, tip whams over and I’m into the first fish- this is a good start! However, while playing the fish my boy whispers in my ear, ‘There’s someone behind us dad!’ Sure enough, some chap had wandered up and was now spectating (not my favourite scenario). Anyways, landed the fish- a 7lb common- and slipped it back. And then the chatting began… and boy did he chat! For the best part of an hour we were subjected to all manner of angling blow-hardiness about catches and matches, gear and technique. He even had the cheek to warn me that if the bailiff came round and caught my boy fishing he’d be in trouble. ‘He’s a junior member mate; here’s his card…!’ I protested. Still he waffled on, and even started to tell the lad off for striking a bite on the feeder (which he didn’t and knows not to).

Finally the guy shuffled off- he wasn’t even fishing!!

We had a nice roach of 8oz next, followed by another carp of around 5lb, and then- sweet mercy- who should appear again?!? I think we managed to show that we really didn’t want to talk, but before he left he dropped in a “friendly” ‘I thought you’d have bagged up by now!’ Great, thanks.

Anyway, as it happened we did bag up (a bit)…after he left! The boy had a 5lb ghostie (his first ever), I had an F1 of 2-3lb another common of 4lb and a lovely common of 6.5lb that I mugged in the shallows on a stealthily laid method feeder ;-) We ended the day with six carp and a roach, and none of them tiddlers.

Some decent fish, a good craic with the boy and a bit of a run-in with a garrulous, non-fishing angler! It’s never boring, is it? 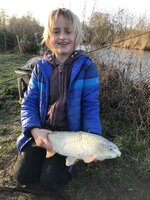 Nice report Alan, and lovely photo of the lad with the ghostie, sounds like a great day apart from your chatty mate

Good write up, shame about your advisor

chefster said:
Nice report Alan, and lovely photo of the lad with the ghostie, sounds like a great day apart from your chatty mate

Sounds like a brilliant session Alan! It's always those that aren't fishing themselves that give the best advise lol!

.... this used to be a good peg but I'm surprised you're not fishing peg <enter number>

....the lad here at the weekend caught <xxx>lbs, what've you had?

They're out there waiting to pounce

I reckon they have the equivalent of those bird watcher hides at selected venues because you never see them when you show up, and they always appear out of nowhere!