Back to fishing today with @MunchMyStump and what a strange day it has been.

The weather was not at it's best. 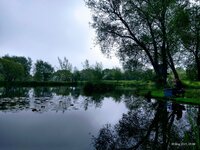 Cold and misty with a lot of clouds hiding the sun but off we went, arriving at about 8:30am.
We decided to set up near some Lillie's.
Obviously as the Mr was new to the pole I started fishing first with my usual set up.

I was fishing about half way between the Lillie's and the bank as I was trying the underarm cast which I haven't really done and was a little worried about getting snagged on the Lillie's. 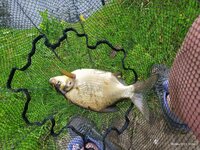 The Mr still hadn't finished setting up but thankfully he was close as we had been there an hour. He eventually started but didn't have any joy. I'd already caught another Bream and the Mr was praying @Dave would turn up and show him where he was going wrong. Although I did point out that he probably wasn't doing much if anything wrong he just didn't have confirmation or confidence that he was doing it right.

Eventually, the Saviour Guru Dave appeared and I toddled of to see Winston the boxer dog.

When I returned Dave was passing on all his knowledge but not even Dave could save the day as he still couldn't get a bite. Alas, everything went quiet for me too.
The sun did finally appear but we were sat in the shade so still cold.... Typical.
I decided to go to the other side of the bank where the sun was glorious. Might as well be warm and not catch than cold.
The depths were different so I had to adjust everything. I stuck some maggots on my hook while doing this.... Just incase. So glad I did, as I only went and netted this beauty. 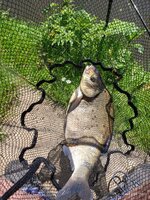 But then everything went quiet... Again!!. Noone could catch a thing.
It was now 2pm and the poor Mr still hadn't caught and he was still sat in cold. 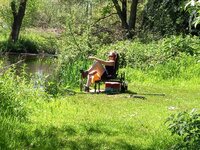 Seeing how warm n chilled I was he decided to come over to the bright side. Except it wasn't for him and he was still sat in the shade. Poor poor Mr Munch 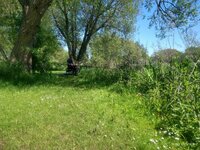 The Mr gave it another hour on pole but eventually decided to use the waggler rod but his luck never changed. I managed to catch another 2 Rudd but nothing else.
Strangely I was actually the only one that has been catching all day from what we could see. Oh! How the pupil becomes the master!!! (Yeah right)

We were finally packed up at 6:30pm. The Mr had sadly not caught anything but he had learned a lot about the pole and how to use it so not a total waste of a day.
A pat on the back for me from the Mr for my win and the treat of having all the hot chicken wings to myself.

He'll learn, it's only a matter of time

(Is there enough time though we wonder ? )
T

A good yarn Mrs Munch. Maybe the fish were spawning as they were on my local park lake today.

A fishy tale well told. maybe Mr Munch need something like odd socks, or a lucky rabbit's foot, but I'm not sure that the rabbit would subscribe to that idea

Dave said:
He'll learn, it's only a matter of time

(Is there enough time though we wonder ? )
Click to expand...

A little tip with the pole ,set up without a float and practice shipping in and out and breaking down to number 2 ,just get everything running smoothly ,rollers at the right height ,seat position ect , do that until your comfortable and its almost second nature , quite quickly you will become good at it and will be able to build up speed . Then add a float

robert d said:
A little tip with the pole ,set up without a float and practice shipping in and out and breaking down to number 2 ,just get everything running smoothly ,rollers at the right height ,seat position ect , do that until your comfortable and its almost second nature , quite quickly you will become good at it and will be able to build up speed . Then add a float

Ps im sure Dave has showed you everything else so just do what Dave said , i just think its so much easier to ship in and out without a rig at the beginning until proficient.