So another outing for me and the Mr. This time to Tevant farm fishery.

Only thing was I really couldn't be bothered. Too tired from constant night shifts so getting up early is a bit of a struggle atm but we'd arranged to go so I made the effort and figured it had to be better than sitting at home. 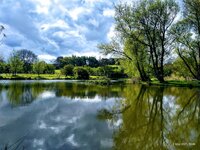 It really is a beautiful little place.

I took my time setting up, working out a few problems as I went but pretty chuffed with myself managing to do it at a new venue by myself.
I had some problems with my line and reel not so long ago but it had seemed OK last time I had been out but the Mr had been having problems when we went last so he bought a new better line and swapped him and mine over. To my Yorkshire tightness horror!!!!

It did however cast a lot smoother and not only could I feel the difference of the line when casting I could hear the difference too. Whether that was the line, that I was casting better or both, I do not know.

I had forgotten all about casting over my head which I had been practicing last time and ended up casting from over my shoulder. I remembered half way through the day but I do find it more comfortable that way so I continued with it.


Again, I was fishing with just hemp and maggots and the first fish I caught was a contender for the world smallest fish record. It was about the size of Mr Munch's co my little finger.
I was steady away after that but just catching small silver until I cast and my float never landed. A second of confusion until I looked up and saw my float had only gone and landed in a tree. Not a small or near by tree either. The Mr came to my aid, managed to get it down but it had snapped the line near the float but the float was just too far to retrieve. 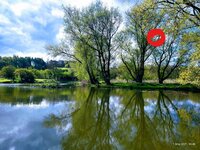 Round about there. I despair at myself.

I set myself back up again but I just could not get into it. I was cold (2 pairs of trousers, 2 tops and 2 coats I really don't know how) and tired. So off I went over to The Mr to warm my hands up under his top. A few non repeatable words later and I could at least feel my hands again.

About half way through the day the Mr went on the hunt for the tree visiting float which had disappeared down yonder out of sight. While the Mr went looking I somehow managed to spot it, the Mr retrieved it and the float was saved. The Yorkshire me was very happy at not having to fork out another £2.50 for a new one.

Near the end of the day I did change where I was fishing and used sweetcorn instead of maggot, managed to catch this little thing. It was my biggest catch of the day. 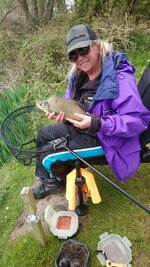 I was up and down all day, fishing a bit then stopping and going for a wander with a nap in between. (That chair really is way too comfy).

I just wasn't feeling it, couldn't concentrate and very easily distracted but I still enjoyed it. I do like this little venue and I'm looking forward to going again. Hopefully when I'm not so tired.

We packed up earlier than usual and headed to Man v roast for a lamb dinner and home to JD and coke, where I got ever so slightly wasted . There is a video where the naked sock puppet made a star appearance but as there's nudity (the naked sock puppets not mine or the Mr's) and swearing I can't post on here.

I'm glad you liked the place

Great write up as usual, keep them coming.

Sounds like a lovely little venue and you had a decent session too, always a good feeling if you can rescue tackle that gets trapped in trees or bushes.

Cold on the bank is horrid - most of us will admit that after a while any concerns over appearance disappear in favour of warm and comfy. The areas to watch for are your neck and lower back.

Start building up lots of warm thin layers - as an example at this time of year I will usually be found in a thermal base such a Helly Hansen lifa then a thermal polo neck (old Tog24 ski tops or Norwegian army shirts), topped with a decent fleece lined hoodie. A couple of pairs of socks in neoprene wellies, combat trousers rather than jeans and a lined bib & brace to keep the small of my back warm.

I don’t like bulky jackets so a windproof combat smock or goretex shell is my top layer plus a really good wool benny hat or thermal beanie.

I don’t bother with gloves but hands can be tucked into the bib to warm up or buy reusable gel hand warmers.

I have come to the conclusion that @Mrs Munch is either clinically dead and as such is a zombie or she is one of the "lizard people". Never in my life have I had hands so cold thrust upon me
Once suitably liquored she did defrost though... A nice but cold day out. A new venue and new species caught. Yeah, other than the cold it was a very rewarding day out. Well done to @Mrs Munch for sticking it out for as long as she did and her eyesight for spotting the £2.50 float at 30 yards tight against the opposite bank in between all the bank side foliage .... eyes like a 5hit house rat!
We will be back but our next outing will be with 12 gauge shotguns... Gulp!

If you are hooking trees at 30 yard there is not much wrong with your casting. That is almost up to @sly standard.

Dave Spence said:
If you are hooking trees at 30 yard there is not much wrong with your casting. That is almost up to @sly standard.

So glad you said "almost"

Hard to concentrate when your cold and tired so well done on managing to catch a few, and for getting your float back.
Once it gets warmer there will be no stopping you

Respect to you Mrs M. You got out there and gave it a go. Well done you.