it came in with a blast of heat, hotter than hot, more akin to tempratures in far flung foriegn lands, sleeping at night wasnt the easiest, the thunderstorms after dark raised the humidity almost beyond tolerance, the Black Dog couldnt settle so decided I shouldnt too, the pair of us whiled the nights away together sat downstairs in front of the fan and the television

work had been tough, dirty and awkward for a big old lump, floor repairs, replacing rotten joisting and wall plates, crawling around like a troglodyte in small spaces sweating buckets, the good old favourite rehydrater, Lemon Barley Water had been quaffed in copious amounts during the day

but this was Wednesday, a day off, no work, a fishing day ! 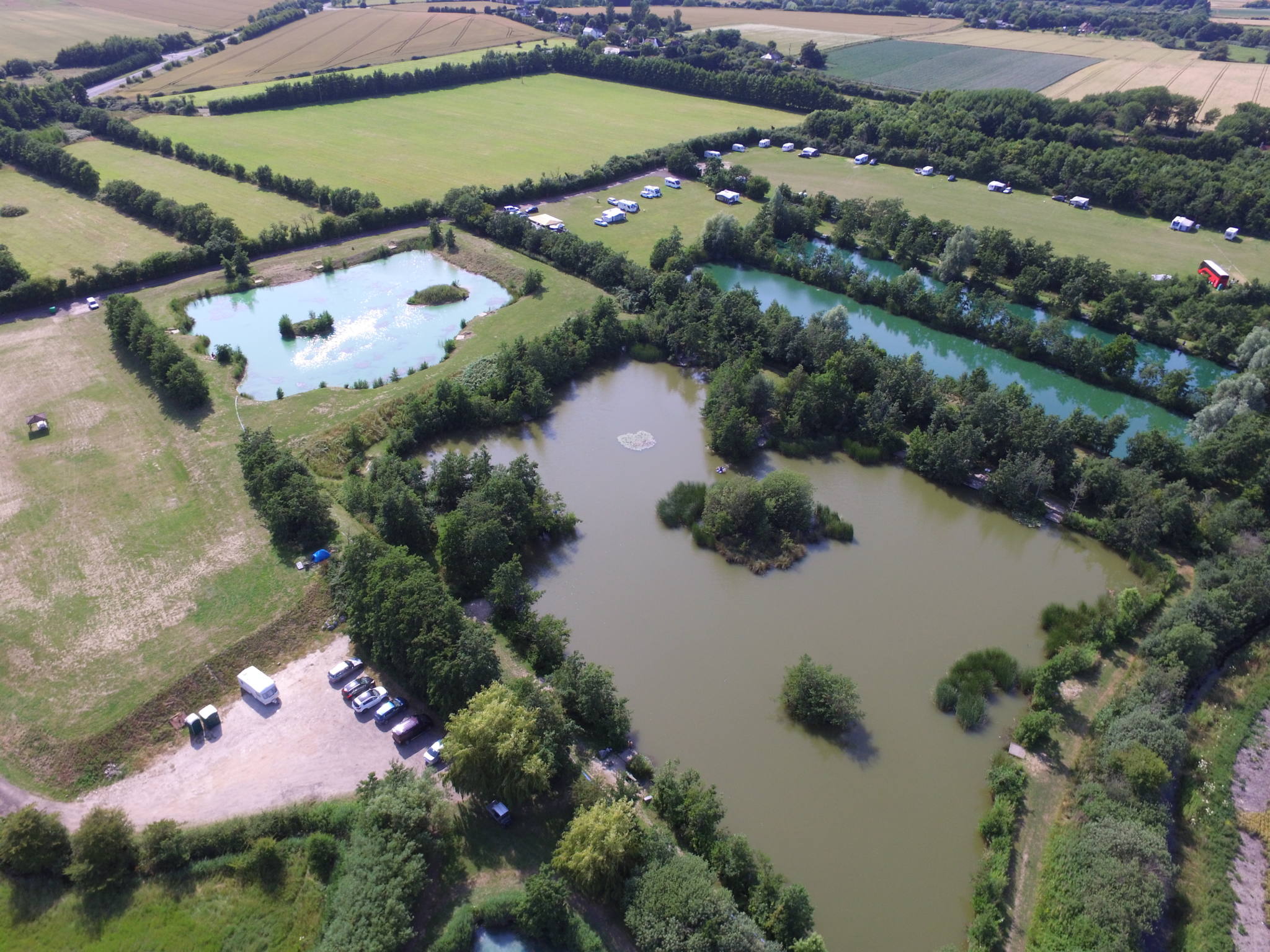 Main specimen lake, 2 acres in size inter-spaced with interesting island features with reeds and lilies abounding in the margins. Stocked with Commons and Mirrors to 35lb including a mixed bag of Ghost Carp, Tench, Roach, Rudd and Perch.

The fishery is easily found, and is very well run, its also a campsite that has all the mod cons that you could need for a short holiday and is popular with those with caravans and motor homes as was witnessed during the entire five weeks of the series

the boss man Kevin, his Partner and Mum, plus the staff run the site in a clean tidy fashion and are on hand till late in the evening for the campers and anglers convinience,

Cafes good, serving a wide range of tasty home cooked meals and the tackle shop is well stocked with a plethora of the bits and baits that you may need

after a day of being with the pup, my thoughts turn to loading the van, its still very warm, the trusty T4 had been parked in the sun near all the long day and upon opening the doors I was greeted with a blast of searing heat, full face on, near took my eyebrows off, you can really see how dogs die left in locked cars when that happens

half hour and half pint persperation later the truck is loaded and ready for the off, feed black dog, bit more earholing and I bid him my leave, Wench will be back in an hour I tell him and he sulks off to my big old comfy chair, cant take yer mate, its too hot,

the dirty deisel bursts into life, used the new, bloody hell you want how much ? key, the replacement for the one that had given me grief the other sunday, for a bit of metal with a tiny chip in it, it seemed an extortionate cost, felt proper ripped

up over the hill to dodgy Dover following the ancient coast road, through the port town, and onto the new thanet autobahn, more houses being built on its length, and with the installation of traffic controls to the roundabouts, it looks like more are planned, halfway there the protest banners appear, the locals are in uproar over a new town, for that is surely what it is, the size and scope of it, Finglesham has been rural since the dark ages, now 1000's of new builds are proposed, covering the land, notwithstanding theres no services, not enough water, schools or hospitals to cope with the influx of mainly DFL refugees from the capital city,

wasnt long before the van hits the Ash turn off and the venues entrance hoves into view, quick right turn Micky and we pull up in the packed car park, well actually we parked on the field adjacent to the packed car park, the reason being is that Bob Atkinsons Wednesday Layabouts gig was still in action on the dedicated match lakes, a bunch I often fish with, and probably would of today if I wasnt fishing this evening, they had suffered under the sun, all looked rather hotand red as they finished and packed away, cafe done a roaring trade in cold drinks

pulling up a chair under the shade of the recently enlarged covered gazebo eating area outside the cafe, I fell into conversation with the twilight gang members that were already there, tis nice to be more social than normal matches, a good hour and half before the draw, chewing the fat over who, what and when, the chat turned to who may or not may be crowned as overall winner of the series this year and there were two outstanding candidates for the top spot

Young (sic) Alan, and older than kev Ian, the fishery owners brother, who had surprised me a couple of gigs ago by stating he was the older of the two, (kev musta had a harder paper round) alan had 5 points and Ian had 6, it was going to the wire and all depended on the draw tonight

tonights match pond was Berry lake, the newest on the venue, being dug less than two years ago, the stocking was mainly F1's in the 1 to 3lb range with bigger mirrors and commons, along with a good head of roach rudd and bream

it was another new lake to me, never fished it before, so a bit of info from the regulars was gleaned as how to approach it, ( apparently, by foot pushing a barrow ! )

draw time, waiting till middling this time, the hand dips in the bag and confidently grasps the token that states peg 6, pegged right on the corner of the lake as you come in the fishery road, shortish walk, that'll do

off round, and perusing what meets my eyes, the large platforms on a cut out in the bank about 4 foot down from the bund, lake looks a bit down on its normal water levels as evidenced by the darker stems of the rushes over on the bank to my front right,

to my left the margin is unfishable, the depth wasnt more than six inches and was clogged with the feather weed, this extended out around 8 to 9 sections then came across the front of the peg, to the right was a short margin, bounded by reeds and a small bush, the open water to the front was interspered by rafts of the feather weed and the right hand corner was full of it, there really wasnt many options to go for, still, yer fish what you draw !

kept it simple this week, only set up 4 kits

both rigs were 0.14 to 0.12 hooklengths, mated up to NG cane tipped finesse carbon floats weighted at 0.4g

float was an NG finesse glass stemmed in 0.3g and shotted with stotz to allow me to move them easily to switch depths and patterns as required

I wasnt gonna get towed around and broke with that set up, lessons had been learned

ready in time for the off, and sat sitting looking around, coffee and fag in hand, looking across the lake, I could see the two series leaders ian and alan, 9plenty to chuck some banter their way then) next peg up on the right was big dave graham, (who had done really well in the riverfest qualifier on the medway at barming the previous weekend, grabbing the golden ticket for the final for winning his zone, well done fella)

it was still warm, muggy too, just sitting there I was dripping, went and got a clean towel out the bag to wipe my face with, being the one over my knee didnt really look that healthy

whistle goes and we are off, first action is to pot in a mix of dead maggot and 6mm pellet to my right (and only) margin, then leave it and out with the pot feeding deads and 4mm pellet at 6 and 8 sections, leaving that too, and loose feeding lives gentles at 4 sections to my front

out with the too hand rig and the single white is hit on the way down, lifting and swinging a 20 to the pound roach in, its netted, rebait and out again, it wasnt fast, getting a hit every 4 lay ins maybe, and not connecting with every one of them, gave it half an hour for not much results,

in and shippin out to the 8 section line with the F1 full depth rig, I had fitted a small toss pot on this top kit and fed over the float with pellet, the float was settling weird, sometimes dotting right down, other times like a lighthouse, sticking right up out the oggin, all I could think of was that there was weed growth sub surface and the rig was maybe hanging up on it, was a pain really, lifted it out, move 4 inches over and drop in again, gave this line half hour for no result at all, not a bite, wether the bait was in the weed I dunno, tried both the maggot and pellet rigs over this line

came in closer on the 6 section line, on pellet, feeding 4mms over a 6mm on a gardner band fitted straight on the hook, didnt seem to be the same weed problem as further out, gotta laugh, hooked slightly bigger but still small roach on this line, chuckled at that, spent half hour on this before switching to the margin that I had been drip feeding since the off,

I couldnt handle that, so back out on the 6 section line, same as before, how a tiny roach can get hooked up on a 6mm banded pellet is beyond me, then, after 20 or so mins, the cane tip wobbled and slipped under, heading out towards the opposite bank, lift in and pressures felt, oooooow, Ive hooked me a fishy, not a roach this time, the white laccys out and doing its job, stretching hither and thither as the unseen fish goes on a tour of the peg, dipping the tip under the water as it heads for the safety of the weeds, its turned and coming back, only to go off on another run, please let me land this one god, please, its swimming around and coming in close then heading out again, 10 mins of struggle until it gets within netting range, out goes the weave and he in it and Im pulling back, its a common, not huge but a carp, the first Ive managed to hook and land the whole series, fetching him in, I get the net over my knee, only to collapse in a fit of giggles, hes foul hooked in the fin, bloody hell Mick, you cant even catch em fair, no wonder he was a bugger to get in !, still it counts and hes slid into the weave of the net,

sat back had a fag and chuckled like a looney on a course of Acid, only you mick, only you

well that was the highlight, nothing else apart from a few eyes and arses were caught that night, the gloaming set in and the whistle went

weighed in for plumb last again, (thats two weeks running) and off over to the tea hut to see how the others have done, it was close in the end

with yours truly getting the wooden spoon, the last two gigs really bashing me up !

it was fun lads, thanks for the Invite to fish and I will be back next year (after a bit more practice) I can only improve
Last edited: Jul 26, 2019

Another excellent tome Mick, looking forward to the next adventure.

Excellent read once again our Mick. .....Love the way you enjoy the experiences for all the right reasons.

An unexpected and very welcome first.