Tench anglers - What are your tactics this year?

Alantherose said:
Not many Jehovah’s witnesses around these parts.

Perhaps we should have a `worst joke of the week` thread

Pompous git said:
Perhaps we should have a `worst joke of the week` thread
Click to expand...

Wouldn't be fair on the other competitors. Mind you, might be the only "match" I could win against most of them
R

Zerkalo said:
I wondered about that last time i fished.

When I reeled in the feeder was empty. Maybe it was spreading the bait around a bit? But I got the feeling I would want to use hemp there again as I think it encourages the fish. Only a pinch of hemp in amongst the maggots but enough to give me confidence it worked.
Click to expand...

This is it. Too much groundbait and you attract lots of silvers and/or bream (although there isn’t much you can do about bream). But in some places you need a reasonable bed of static particles; hemp, caster, chopped worm, corn. The issue arises when you’re fishing a distance which is too far out to accurately bait.
This is why so many successful tench anglers “spomb” their bait out. Last night I tried a poor man’s version - using a massive cage feeder packed with casters and hemp, with the ends plugged with sticky mix of groundbait and micro pellets (also loaded with hemp and casters). Some people do this without the hook for a few casts to get some bait into the swim - I was just clipping it on every other cast once I knew the fish were there but it could have been even better to have started with a few loads in the same place before settling a smaller feeder on it.
The right hand rod didn’t get any fish and on that one I only used a small inline feeder, maybe that mattered, maybe not.

I should admit the last session (the only session) I've had on this lake was a bit of an accident. I went fishing for Roach as explained below using the same tactics and ended up with a load of Tench. It worked so I see no reason to change it although I might experiment without hemp to see if it really made the difference I thought it did. 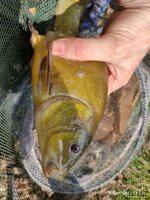 Another accident, this one thought it was a roach. Single red maggot on the drop.

"It's dead shallow where yam"

Anyone else had a bad day