in your original post you mention quite a large selection of baits, this time of year on the bigger rivers location is key, i wouldt be too worried about baits if your on fish the hemp and maggot and castor will get you buts but i cant say enough that in winter its location over baits selection first of all.

carphauler said:
That's why I said check behind it, there appears to be spaces here.

I'll try and have a look tomorrow.

StourPerch as I call it. What a grueller. Only for the very hardcore angler it would seem. 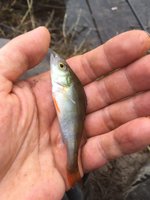 I mention location myself when talking about how to fish rivers in winter, but I have no clue about the best pegs at Stourport, as proven by me arriving first, jumping on one of the first pegs I see, only for four other anglers to arrive and tell me "I'll warn you about this peg, it's snaggy on the inside and you have to fish further out". Great! I thought. And he was right. Snagged up every run through on the inside, there was a sunken branch or something there, and I wasn't really feeling my chances fishing much further out. That other anglers turned up seemed a good sign that there's some sport to be had there over winter though, so after an hour I moved peg.

The next peg I chose wasn't much better. The water there was very slack. When it's low in summer it's a sandy bay on the inside of a bend, but I still had 5 foot of depth there. Ended up not using much bait as I wasn't catching. Feeding more did nothing. There was just no fish there. Stourport can be grim fishing in my experience. It reminds me of when I used to fish it with my Junior Club, always just a handful of Perch, and canals always fished better.

Not going to deny that Roach can shoal up there in places in winter, as the theory about the place goes, but I don't think I will be fishing there again for a while. A very difficult place in my opinion, but I'd like to be proven wrong if someone else can fish there and catch a few. I ended up with 6 Perch, 3 of them micro Perch like the one pictured and 3 around 3 or 4oz.

I wouldn’t be hard on yourself as not sure what it was like there but it wasn’t as warm here as it was supposed to be. We abandoned any thought of silvers and went for chub and had a few. Reckon we’d have blanked if we had gone for silvers as still not quite warm enough yet.

I think Stourport is just a bit of a difficult place, but I'm not sure how the other anglers got on, would like to see some other reports from there of people who could possibly fish it better than me. Well done on the Chub, I'll read your report in a minute with a coffee if you've written one.

Nice cafe around there. The lass who served us when we were down there looked like Sophie Ellis Baxter. ??

JLK said:
Nice cafe around there. The lass who served us when we were down there looked like Sophie Ellis Baxter. ??
Click to expand...

Did you fish it? And if so, do any good?

Zerkalo said:
I think Stourport is just a bit of a difficult place, but I'm not sure how the other anglers got on, would like to see some other reports from there of people who could possibly fish it better than me. Well done on the Chub, I'll read your report in a minute with a coffee if you've written one.


Edit - ah you haven't written one, I'll read it if you do though!
Click to expand...

I have now. Was rubbish for me tbh but my grandad did alright haha
J

No we didn't unfortunately as we were there to fish a festival but there were loads of fish topping either side of the bridge when we had a look.

As I was walking back I chatted to a chap and he told me he's just got back into fishing and had came to have a look at the river, told him what I'd caught and he said he's from Bewdley and prefers it up that way as the river is a bit murky around Stourport and I'd agree with him though it's a nice place to fish once you've done the walk to the peg, and I caught 'a few' in Summer, just lots of Bleak at there at the time too. In a way I do wish it was rammed full of fish there as it's pleasant to trot on slower stretches...

Might just need to warm up a bit. Few degrees can make or break it in certain places at certain times.

Zerkalo said:
Can't seem to find Clive Branson at Stourport only at Bewdley?
Click to expand...

Sorry, didn't mean to mislead you, when I said he fished it a lot, I meant the River Severn, just thought it would be similar sort of fishing.

Sorry you had a tough day mate, those pesky silvers can be elusive, I wouldn't give up on a stretch after the first outing, they are there somewhere and it is really rewarding to persevere and get it right eventually ! , if other anglers are fishing the stretch there must be fish there somewhere. But as many have said location and conditions without at least one on your side it can be very tough.

Cheers. It's just where it starts (or ends depending on which way you look at it) to be navigable by boats, so near enough the start of the lower Severn if I'm right. @carphauler or someone should get out there and see if they can catch a few.
C

@Zerkalo was there any parking where I said?

carphauler said:
@Zerkalo was there any parking where I said?
Click to expand...

I didn't check sorry. Legs are still aching a bit from the walk from the basin too.

The joy of light elastics
2