After a few days of false starts I finally got a proper trotting session in on the Dorset stour in Christchurch today. Was greeted by lovely calm, sunny and for autumn mild weather early doors that then went progressively down hill as the wind got up but still had a good session quantity wise even if definitely not quality wise.

I started about 7.15 and finished about 2.15 as it finished best in the morning and was a bit of a struggle in the afternoon when the wind had got up. Conservatively I’d say I had about 40 dace, about 20 roach and about 10 bleak. Back home on the Thames and tbh on my previous trips to this stretch of the stour those sort of numbers would bring at least 12lb often pushing 15lb but today would have been a probably a good couple pound or so short of 10lb. Some of roach were decent but the dace were small possibly due to the hangover from the floods I guess. Yesterday’s match was won with only 9lb odd so seeing as I was probably not that far off that I was not too disappointed and happy to have caught enough to keep busy.

Tackle wise I was left ruing not bringing my usual 13ft acolyte ultra and 7 series 3000 float combo given the river had dropped more than I’d expected but the 13ft CR10 #1 and Sahara 2500 with 3lb maxima made for a reasonable stand in set up. Rig was a 5bb DH stick to a size 18 to 2lb 12oz kamasan hook to nylon set to fish just off the bottom in a bit over 6ft of water. Hook bait was single red maggot (tried hemp to get some more proper roach but waters still too mucky I guess) over a loose feed of half red maggot and half hemp with the odd ball of caster laced white crumb.

All in all whilst the quality was not what I expected the quantity was pretty good so after the few false starts I was happy enough with the result. After well over 30 sessions on the Thames on the bounce it was nice to mix things up and fish on a different river to the Thames for the first time since last year. I’ll definitely be back again hopefully when the river is a little less chocolately!

Pics of the swim and a couple roach to show the size range, there wasn’t any particularlh photo worthy dace unfortunately. 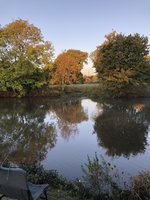 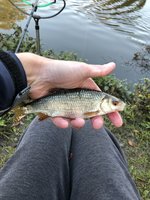 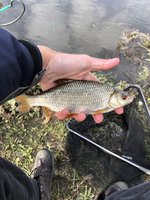