Study to look at barbel and chub numbers

The Environment Agency is carrying out a project to look at barbel and chub stocks in the Dove and Upper Trent in Staffordshire. 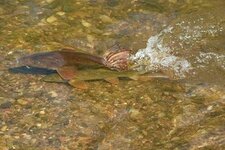 Barbel spawning in a river

The 12 month study has been launched after anglers have claimed that stocks of the fish in the River’s Dove and Upper Trent have declined in recent years.
Anglers are being asked to complete a questionnaire about their catches, rods, bait and angling location and to send in scales from any barbel or chub they catch, which will be tested by the Environment Agency to determine the health of the fish.
Darin Alberry, Fisheries Officer with the Environment Agency, who is leading the study, said:

We’ve listened to what anglers have told us about falling stocks of barbel and chub.
Click to expand...

There could be a number of environmental factors that are having an effect on numbers, but I hope we can get a good picture of the numbers and health of these popular fish.
Click to expand...

Anyone wishing to take part in the study should contact Darin Alberry at darin.alberry@environment-agency.gov.uk.