A massive thanks to the guys at Calverton Fish Farm for these bonus beauties! 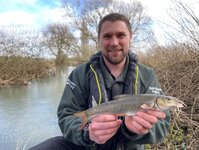 Over the course of four days we stocked 24,000 fish across nine sites, on four different rivers, benefitting at least eight of our angling clubs. These #fish were the result of yet another successful spawning year and had to be shifted to make room for the next batch of fish coming through the fish farm.

Barbel were the first species to be stocked, with 2000 fish going into the
River Great Ouse
at three locations.
Biggleswade & Hitchin Angling Association
and Weston Underwood Angling Club received 1000 fish for Ravenstone, with Newport Pagnell Fishing Association and Odell Angling Club both receiving 500 barbel for their stretches. 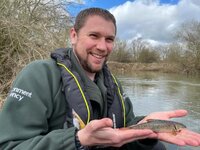 Next up it was chub and dace with 6000 of each species split equally between the river Ivel and Lt Ouse.
Letchworth Garden City Angling Association
received 1000 chub and 1000 dace for the Ivel at Henlow (out the back of their Poppy Hill complex) with the remaining 2000 chub and 2000 dace being split between Biggleswade Mill and Biggleswade Common. 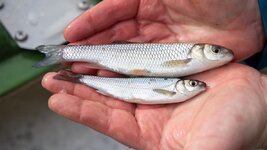 Brandon & District Angling Club received the final 3000 chub and 3000 dace with all of these fish going into their stretch of the Lt Ouse downstream of Brandon Staunch. If anyone has walked this stretch of the #river recently you would have seen a construction site at the sluice, this is the new fish pass currently being constructed which is due to open later this year and will allow fish and eels populations to migrate in both directions past this structure.

Finally, it was the turn of roach and common bream. In total we stocked 5000 of each species into the Cambridge Fish Preservation and Angling Society stretch of the River Cam downstream of Baits Bite Lock. 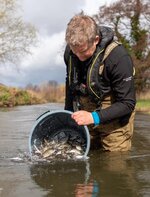 A huge thanks to all the angling club committee members who met us at short notice to assist us with access and the stockings.
These fish are all funded through your rod licence income, so don’t forget there’s only one place you need to buy your Environment Agency licence – www.gov.uk 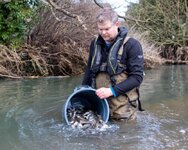 Thats great news for the Cormorants.

Im sure there's a cheaper way of feeding the cormorants
C

Tongue in cheek response but if the ea were really keen on maintaining stocks a better option would be to combat the source(s) of the problem.

Any chance of correcting the spelling mistake in the title? It's really annoying me.

CJROSCOW said:
Tongue in cheek response but if the ea were really keen on maintaining stocks a better option would be to combat the source(s) of the problem.
Click to expand...

I still don't understand why a farmer can shoot a fox for taking chickens or a dog for worrying sheep but fishery owners cannot protect their livestock in a similar way.

Though of course we are allowed to "Shoot to scare the birds off".

Sturgeon (not the Scottish variety)