Hi All,
Managed too have a return visit to the Warwickshire Avon at Hampton Lucy, Brook section, one of many I'm sure. The main purpose was to do a few photos of the swims available, and then try hemp fishing for roach on the weir. I found 14 pegs cut out, but there may be more. The bank side veg' hides a lot of the river and made the odd peg an
assault course. 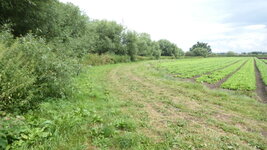 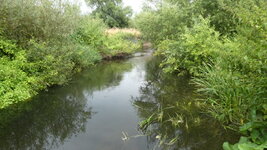 As you can see from the first pic somewhere along the edge of the field there is a river, Fight your way to through to the river and your're greeted with a tempting scene. The potential for me was proven on my first visit ( See recent post New member enjoying life} 6lb 6oz Barbel, and 3lb 8oz Chub. What else did it have too offer? 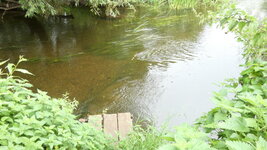 The depth of the stretch varies but mainly quite shallow. The gravelly swim above showed the potential on my first visit when a Barbel glided away from the inside to settle under a tree on the far bank. After dodging the rain during my exploratory photo walk, I was itching to see what the weir had to offer? This stretch is more suitable for a roving approach. Not knowing how I was going too tackle the weir. I had brought my full tackle box loaded on to my barrow but lightened the load by taking just two rods, 14ft Accolyte and my Garbo' picker. The intention was to try stick with maggot to see what was there, and if roach showed switch to hemp. The picker was just a backup.

View attachment P1020708.MP4
Who doesn't love a weir pool? I certainly do!!!.There are two pegs here, one opposite the weir itself. The second in the back swim at the lower end. This was the peg I chose simply because I could set up comfortably. Rigging up my float rod with an Alloy stemmed stick, plumbing up I found 8ft of water under my rod tip. The flow in the back swim was coming towards me, then back up the inside bank to my left. I cast out in front of me and controlled the line as it swung back towards me then held it back to allow the flow to take my maggot loaded hook to my left. I got what I expected using maggot. Small bits, dace, chublets, and tiny roach. A switch was called for to get through the small stuff which was teaming at the surface with every loose feed. I settled on a 1 gram pole float with an olivette to power through the bits to the bottom. They were still attacking my maggot on the way down, but when it got there I found willing perch to put a bend in the rod. After a half a dozen I found a 4oz roach just what I was after. So a switch too hemp was called for. I suppose I should have started with it, but I wanted to see what else was there. The reason being that I wanted to find out it's potential for delivering as many different species for a fishing race. Anything from Minnows to Barbel. I now knew it held five species Barbel, Chub, Dace, Perch and Roach. Pike didn't put in an appearance but I know the Avon has loads. Back to the hemp fishing, a rig change to the stick with hemp on the hook brought a couple of tiny dace, not what the doctor ordered. Perseverance started to bring a few roach but I felt the shotting pattern was not quite right and a call for styls was needed. I set up a 0.4gm pole float with 0.04gm styls shirt button style in the last third and bang a proper roach of 7 to 8 ozs. Great they are there!!! The sky had been threatening and a call from the missus saying it was persisting down and thundering prompted time for an escape. I was content with what I had seen and achieved.

So anyone for a fishing race? I'm going to do it on 25th September 12hrs of daylight, 7am to 7pm start and finish in your own living room anywhere in the country on any type or types of venue. Private message me if you fancy a bit of fun and a chance to show case where you live. If anyone is interested I will do a separate post. I know there are a number of people who have done it in the past.It's just that I haven't and fancy giving it a go. I have been thinking about it for some years, planning where I would catch various species so time to get off my backside and actually do it. The race is on!!!

That's the type of fishery I like, unmolested, natural as they come, uknown hidden residents <'}>><

That it is Mick and Dave, only 760 metres long but packed with potential. Every peg has character and fish. Another visit to the weir is called for, to check out those roach. Then an evening session to see if the Barbel and chub go any bigger. Can't wait.

Ausho said:
That it is Mick and Dave, only 760 metres long but packed with potential. Every peg has character and fish. Another visit to the weir is called for, to check out those roach. Then an evening session to see if the Barbel and chub go any bigger. Can't wait.
Click to expand...

Ohh yes. Just off that inner bubble line. What a great swim. I must get myself back out on a river, that video gave me goosebumps.

A day with Ravey on an old favourite venue.

T
Evening On The Nene

Not what I hoped for, but good sport