So after many years my Savage Gear LRF rod finally broke at the tip getting it out of its poorly designed ready ready rod bag. Over the years I have used it to spin for trout and the odd trot down the river for grayling largely because the river where I fish is not safe to wade and is almost no bank to cast from. More recently I have spun & drop shot for perch been ok but I have seen technology and times have moved on and actually was glad of the chance to buy a new rod!!

An internet search for Spro brings up loads of videos of people 'urban' fishing as is fashionable these days and very little in terms of reviews and dare I say what the rod actually looks like as a whole so I was unsure as I am kinda traditional in these things... Like my other spinning rod is a Prorex well built but 'safe'. So after taking some advice from a specialist spinning retailer I picked the Spro FSi Micro lure 1-8g 2.05M. It has Fuji single leg K rings and a Fuji reel seat. 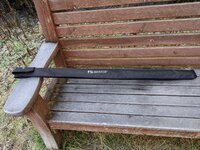 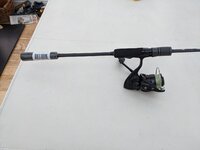 Out of the bag all seemed straight and nicely finished, the neoprene parts were comfy to hold and felt quite robust The FSi is Spro's top of the range rod (I think) 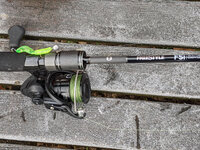 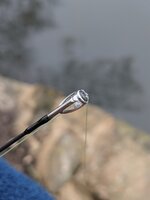 The rod tip picture doesn't show you the fineness and sensitivity of the tip (apologies for the ice - it was that cold)
My only disappointment is no hook keeper ring but Spro sell a clip on dropshot hook keeper device which should cure the issue if that's your preference.
In the hand the rod balanced well with my Theory 2000 which weighs in at about 250g so actually a light 1000 size reel may not be ideal

The rod is fast, crisp and casts straight (Not ideal braid on spool 28lb J braid) which I am swapping to 12lb braid. As you would expect recovery from the cast is quick with no rebound.
So far so good but how does it fish?? well I tackled up with a 4g jig head and tried some vertical jigging or as i like to think of it as bouncing the lure around off the bottom near the bank and immediately I could see the action imparted to the lure with just tiny flicks of the hand was far superior to my old LRF rod no doubt because of the fast crisp action. This rod has a solid tip and you can see the difference it made. I then set up for some drop shot this time a 4.5g lead dropshot weight. I could feel every bump and bang of the lake bed. Low and behold I felt a tiny but different movement in the blank where I was holding the rod and in came a tiny but welcome perch big enough to put up a little fight on the rod and again I could feel his twist and turns as I wound him in. This might make for more relaxing fishing as not only can you see the bite in the rod tip but you can also feel it. 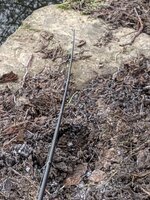 The pictures don't do the blank justice it is much slimmer than it looks. As usual I was on my own so had to hold rod and work camera!!

To wrap up its a great rod for the money (i paid about £115) build quality is at least as good as my Prorex, but more importantly buying a rod to do the job properly has made a big difference to the way I can present and work the bait. If you are looking for a light rod for soft plastics / lures or dropshot this is worth consideration. I hope in better times to take this to Amsterdam for the weekend and give it a shot in the canals! Give it a go it's more than a fashion accessory.

Have you fished the canals in Amsterdam before? Only been in winter myself when they look dead but I assume there is a fair bit of life in them at better times?

Thank you!
I haven't but the you tube video's look good apart from all the fishers look like fully paid up members of Russian Mafia! Going to try in summer if its'safe' might go with a few mates and hire a guide. I can go on ferry fairly easily mind you Eurostar go direct i think
A

I've spent most of my life living in Amsterdam, so pretty familiar with the place. If you head out the back of Centraal Station, where the busses are, rather than the trams, there is a large expanse of water, and I've seen perch and zander caught there by anglers flicking in lures where the ferries come and go. Walking left (with your back to the station), there is a small marina, and its pretty quiet from a tourist perspective.

PM me if you want some more pointers, the good thing about the city is that it's actually a small town with loads of options to get around.

I’ve got Spro rods and reels and rate them highly.