After an hour in work - an hour too long - I raced to the lake arriving at 7:30 and had it all to myself. Lugged my gear to the far side, tackled up my regular method feeder rig as per usual and poured a coffee. Lovely mild morning with a teeny breeze. Opposite a pair of carp anglers arrived. 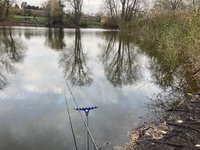 Didn’t make my standard mistake and hit my first bite - after only 8 minutes - sliding a 6lb common into the net after a decent fight.

Four boilie rigs descended along a fairly wide spread halfway across the lake accompanied by chirruping alarms and in went my second cast back into the second bay, 11 minutes this time before the tip whipped across the rest and a very grumpy carp tried to make the reeds before I could react. Must have had a decent nights sleep though because I got to the rod in time and turned it towards the open water after a couple of heart skipping minutes.

Lost the next one, badly set hook I think & while I was rebaiting the feeder an alarm went off opposite - carp landed a lot more quickly than I can do it but then my gear is a whole lot lighter.

My bites were coming after 15mins or thereabouts, probably the colder water, but I was getting a bite every cast & with half a dozen banked one of the carp chaps headed my way for a chat of course the carp obliged with another bite and I played in a gorgeous 7.5lb common much to the amusement of the guy beside me who then went off to improvise a method feeder of his own.

Took a little break for a litter pick - one bulging black sack in very short time - as the second carp fell to the anglers opposite so it was time for more coffee & a bit of cake, one must observe the social niceties.

Tiny fall back bite was next and I lifted into what I thought was a snag - dropped the tip to pull for a break and as I did the snag went left at a crawl, a crawl that suddenly turned into sprint up the lake. This one wasn’t playing about and ran me ragged for ten minutes but well worth it for a scale perfect 9lb 7oz common.

A dinky 2lb ‘toddler’ was next but time was getting on and I popped a last cast short on the edge of the reeds around 12-15yds away and began to pack away. Timer went off but I gave it another five minutes as you do - didn’t need five as after three the tip ripped around and another 7lb beauty posed for a photo.

I caught up with the carp pair as I made my way to the car, good natured banter ensued about carpers v matchmen, and by then there were about ten anglers spread around the lake with more arriving complete with barrows, bed chairs & holdalls you could hide a body in - I felt positively under equipped With my little seat box and single rod 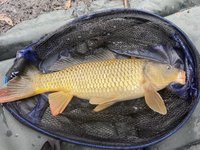 I can now tell my wife what I want for my birthday - a new reel !

The little £2.50 charity shop ‘Kingfisher‘ one that has lasted manfully for 4 months was never intended for what I’ve subjected it to and fell apart after fish no.6 but a fettling session with the leatherman got it back together for the rest of the session.

Had a look when I got home and it’s a mess inside, no ball races in there just worn sintered bronze bearings and a whole lot of slack, slop, squeak & crunch. The spool is quite badly worn inside too. RIP a valued friend I salute you.

Well done Taff. Some cracking fish there for the time of year.

The Landlord said:
Well done Taff. Some cracking fish there for the time of year.
Click to expand...

It‘s fishing it’s socks off - well it is for me - I think it speaks volumes about the stock volume and quality of the fish which is why I’m determined not to see it get netted out.

The guys opposite were from Gravesend (30 min drive away) and had seen it on FB - even more impressed having fished it. A fellow MD’er fished it last Saturday and told me he’d fished £15 per rod venues that weren’t as good.

What a difference a week makes - Neville Park, Snodland