It was good of the Kinver (where I live) club to allow day tickets as they have a very long waiting list. I'm itching to be able to fish Dudmaston. The bloke in my tackle shop also told me he's just got his membership and fishes one of their lakes for Crucians but I can't remember which one he said it was.
C

bezzer said:
To fish the LB Kinver stretch now means a blooming long walk. Despite having a BAA ticket I still went to Kinver as it was a nice productive stretch. Changed when Mr Hayes retired and the other bailiff took over full time. He was a bit full of himself.
Click to expand...

Fish the opposite bank, that's BAA,

I’ve fished it a couple of times, but the Kinver stretch has 2 particular pegs which can’t be reached from the opposite bank. One is the caravan chassis peg and the other is just down from the canoe landing beach.
plus the last time I fished the BAA bank there were 20 thousand ducks wandering around in the meadow

I went to Quatford as planned yesterday evening. It was busy when I got there but I still got a parking space so off I headed down the hill.

I walked down the second meadow, that peg with the sunken tree is actually I think one of the better pegs on this stretch if it wasn't for the snags, all the flow gets funnelled into a channel on the outside of that bend. Not going to fish it again because of snags though.

The peg I was on last time is also a decent peg, even though the flow is very slow at the moment it's actually quite narrow there and so the flow is quicker than other pegs, it also looks slightly gravelly. That peg was taken so I carried on walking.

I carried on walking, past the houses, all the way to the end of the second meadow. I've heard meadows 3 and 4 are good but I'd walked far enough for me.

Ended up on probably one of the least Barbely looking pegs I've fished. The river is twice as wide as the narrow peg here, but on casting out, I also found it was twice as deep... so wider and deeper... the river is a strange old beast. I can only presume it's a bit of softer ground there, that's why it's cut out a big hole?

I fished it anyway as didn't want to walk any further. Wasn't expecting anything (tell a lie, I wanted a nice big Barbel) and didn't get anything other than one little tap that probably a small Chub as it took a chunk out of my hookbait.
C

Fished Sunday for a few hours, rivers still low and clear, had a few pounds of bits and 1 small barbel around 4lb, lost one that broke my hooklength on rocks I think. 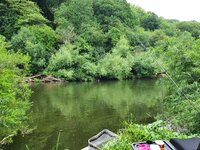 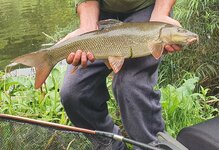 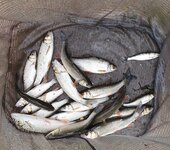 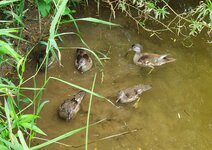 My parents and brother and family walked from Arley to Trimpley today. Said it was quite busy at Arley with 5 cars parked in the first meadow. They stopped at the Harbour Inn on the way back. My dad said he ordered faggots and was expecting just two small ones on a plate, ended up with 4 massive ones and had to give one to my brother. They enjoyed it.

I'm going to go check out Trimpley over the next few days.

@carphauler did the silvers and barbel come to the same mixed approach or did you fish for them separately?
C

Silverfisher said:
@carphauler did the silvers and barbel come to the same mixed approach or did you fish for them separately?
Click to expand...

Separately, barbel on the lead, silvers on the stick.

carphauler said:
Separately, barbel on the lead, silvers on the stick.
Click to expand...

Just wondered if it might have been a hemp and caster on the feeder job given the apparently clear conditions.
C

Just wondered if it might have been a hemp and caster on the feeder job given the apparently clear conditions.
Click to expand...

Don't really fish caster that much, barbel was on meat I don't really use anything else because I get pestered by small chub, I sit out for bigger fish.
C

Zerkalo said:
I'm going to go check out Trimpley over the next few days.
Click to expand...

Where you going to park?

carphauler said:
Where you going to park?
Click to expand...

Not sure mate. My parents walked round Trimpley Reservoir which I've been wanting to see as well but that's a separate club and I presume they have that car park. That's why I'm going to check it out first before I try and fish it. My parents said it looked shallow and racing through down that end which is what I kind of expect it to be like there. Never seen it except for videos though so going to check it out. They also said they saw a BAA 'fishing ends here' sign around Trimpley so that's another reason for me to go and have a look.
C

There's the Severn trent carpark, not sure if you can park on it, then Eymore wood carpark, still some walk down to the river though, that's why I never investigated it further I think.

I'm getting used to long walks at Quatford. Some of the best pegs in second meadow there are opposite some houses though. I like it for the peace and quiet as there's not even many walkers but feel bad fishing at the end of someones garden. I've heard at Trimpley due to the gravel beach (it looks to be on a corner) you get a lot of people bathing, paddling, and throwing stones.

Fished Quatford this morning. I should still be there as I got home ready to go to work, then called the agents and told them I'm doing it tomorrow anyway. I didn't catch anything though. Had one bite where the tip was bouncing all over the place, wound down the baitrunner, and nothing on! Did see a bailiff on the walk back though who gave me some good tips on pegs, said they've cut out a new peg just upstream of the sunken tree that I'll have to check out.
C

It's rock hard at the moment mate, if you catch anything you're doing alright, it's the time to visit previous good pegs and hope you catch, I'm not messing about trying new stretches till the water goes up a bit.

Yeah, there was only one other person fishing the stretch yesterday and he only had a Chub. I think people knew it was too low and you were right about it being clear. When I went before it was quite low but had a weird tinge to it, even that's dropped out now. It needs another couple of foot on for me.

But the weather forecast has changed for this weekend so I'll probably be back out on my usual peg at Arley, not expecting too much given the conditions but I need to catch as my catch ratio target has dropped. I have catching up to do.

I fished my usual peg at Arley RB today in an attempt to boost my catch/session ratio. @carphauler will already know this as we bumped into each other, very nice to meet you mate, it was bound to happen eventually. 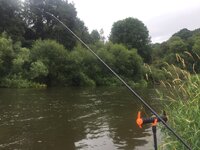 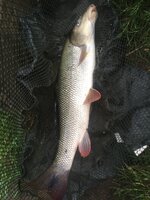 I spent the rest of the time feeding the ducks/letting the ducklings eat the bait I'd dropped from around my feet.

I also managed to catch someones lure, and it was orange too, attached to quite a bit of line. 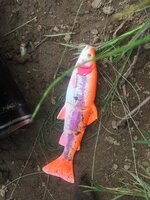 River did not look too bad today, had probably came up a couple of inches with yesterdays rain, was still quite low but did not look that clear with the overcast skies. I said I was going to stay late but was quite tired and reckon I could have carried on fishing all evening and not have another bite so I went home. Hopefully @carphauler has had a few.

Not just a one trick (species) pony - River Medway, Allington

Koi on the River Forth