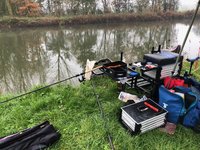 First outing with my new (to me) Rive 25. The 2 black trays are the supplied Rive ones (one on the seat base, one on the stacker base, which slides into the void under the seat).

The silver trays are either Tubertini (from my old, originally red topped, conti box) or early Rive (that I bought from a guy in Upton on Severn). The all fit together just fine. The sliding catches are visually different, but the pins line up exactly the same, so I'm reusing my trays just fine.

My old Conti box had octoplus, I ended up selling most of it on eBay (made a tidy sum), which I then spent on Preston gear, which fits the 25mm diameter legs of the new box. (Octoplus is 16mm I think). 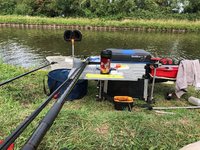 To be fair, I'm not convinced! The contibox setup was pretty light, and I took what octoplus I needed. (rarely a footplate for example). The Rive, it's all there, and it weighs a tonne! Ironically, the guy I bought it from sold it because he was getting a Matrix setup, and he said that is eve heavier.

I've finally come to terms that I need to buy a barrow for those longer treks.
Click to expand...

Or take less gear, but dont forget your pole rigs ?

Arch. Is that a one off made box, looks A.M.A.Z.I.N.G darling. Seriously I remember mine being very light (empty) compared to the modern metal frame jobs. I had an old one I converted into a worm farm. Worked a treat.

The problem with a lot of the new seat boxes is they are not made to be carried over the 1-5 meadows that you mention and trollies and barrows are not great at negotiating the stiles and fences that you usually find in those 1-5 meadows. So really a box for this type of fishing needs to be able to be carried over your shoulder and as such should be fairly light weight. I fish similar venues and my boxes of choice up until this year had been an old Brilo and when that needed replacing a Matchbox SX4 both are lightweight and very well made (although with a brilo you have the same 16mm leg issues you have with you box). This summer I dug my old boss modulator out of the shed and gave found it ideal as I can add or take away drawer units as needed, there is an area to carry reels in as I am not a big fan of 3 piece rods in ready rod bags and also not a big fan of long 2 piece rods for long walks over rough ground and fences (they need very long holdalls which can be a pain in the bum in undergrowth) another option box wise could be the Maver Venue which is very light weight but you would need an extra bag to carry you bulkier items in

TBH OP, would consider a decent chair (with strap) and carryall.
Unhooking mat, net head and towel tuck into closed up chair.
Load carryall with item you need for venue / method being fished and leave rest at home.
Rods, made up in readybags into a quiver along with landing net handle, bank sticks and float tube.

Can up sticks and move pegs in a few minutes and easily transportable on shoulders/back.
N

Rick123 said:
Arch. Is that a one off made box, looks A.M.A.Z.I.N.G darling. Seriously I remember mine being very light (empty) compared to the modern metal frame jobs. I had an old one I converted into a worm farm. Worked a treat.
Click to expand...

It‘s a brennan and Hickman by the looks of it Rick.
Joe Brennan has been a successful matchman on the midlands circuit all his life.
they were fibreglass rather than plastic (as were the first shaky boxes) ... but the drainage channels on the seat were a weak point. 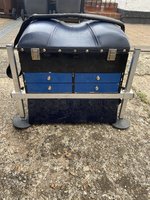 This is my little box - no manufacturers name on it and of indeterminate age but holds everything I need for a session, the 19mm legs mean there’s an abundance of accessories available secondhand cheaply too. 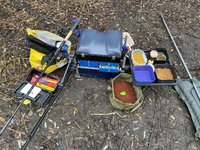 All set up and ready to play
N

If you are mainly a river angler I'd invest in a platform barrow first before a new box.
Either a Rigger or a Penrose - see plenty of both on the matches that I fish.
As NEJohn highlights - they can also be a real pain if you have to negotiate lots of fences/stiles, but one or two unload/reload is not too bad.

personally - like Arch I love my AS1 - and find the integral side tray absolutely brilliant. If I did
I don't bother with a platform for canal venues - but do have a footplate (mainly to attached keepnet to)

Arch said:
Todays incarnations shouldn't be called boxes IMO, they should be called seats. They don't hold anything.

These beauties are boxes. 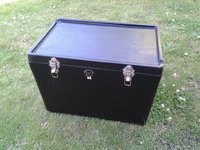 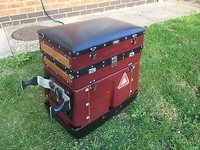 I still use an AS1. I don't carry made up rods though, so all my reels and spare spools go in the bottom of my AS1 along with catapults, hooklength boxes, feeders and such like. If I ever needed a new box, I'd buy a second hand AS1.

I have a smaller version of that B&H box
Locally the big seller was this version: 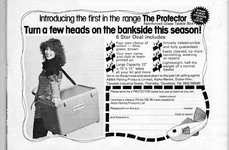 Alpha Marine were a local GRP boat manufacturer who happened to have a couple of anglers amongst their board of directors and diversified into fishing boxes (probably after seeing the Brennan & Hickman product) before the Shakespeare / Galaxy / Daiwa boxes cornered the market.
The underside of the box featured the raised outline of a fish so you'd leave a nice little imprint in the mud to mark where you'd been.

Your welcome I just love the way that the sidetray fits underneath the seatbox for transporting, brilliant idea IMO.
R

I’m a bit old Sokol, and that includes my choice of seat box. Until very recently, I was still using a Watercradt job which I have had from new. Having lost a lot of weight, I found the seat became uncomfortable, and so looked around for an alternative that offered some padding for my posterior. I settled on a Brilo; it is similar in terms of dimensions, has the storage for reels and carries etc, and I am getting on well with it. Once I manage to put a bit of weight back on, I will probably go back to the old faithful Watercraft. So…it may pay to stick with what you know?

I had old rive with octopus legs and trays are smaller than modern boxes, something like Matrix F25 is a suitable replacement it has a 90mm base unit which will take reels a removable footplate and you can get additional units. I use a matchmaster which was previous model the only difference is it has a folding footplate. 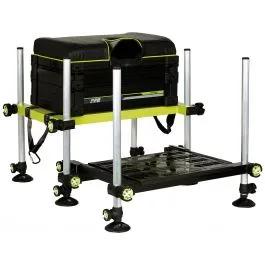 Here's a few Seatbox suggestions @M.H that might suit your requiremnents: 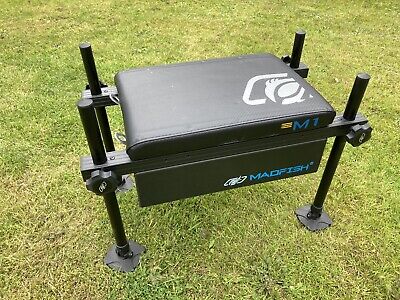 Find many great new & used options and get the best deals for Used MADFISH M1 seat box fishing equipment at the best online prices at eBay! Free delivery for many products!
www.ebay.co.uk 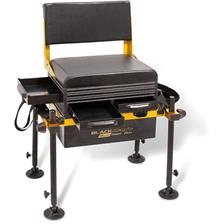 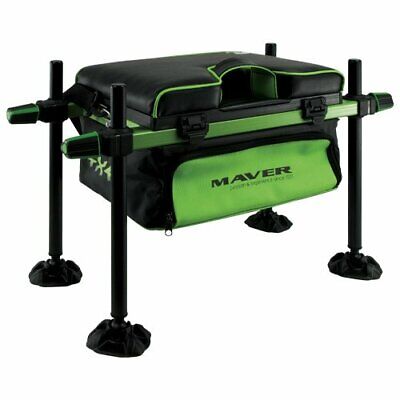 Alfa Match basket with legs Ø 25 mm, with a compartment under cushion h 12 cm. The legs can be stored and hooked in the underlying part to reduce the overall dimensions and facilitate

tackle simplificationRealistically, it is likely that