ukzero1 said:
There's only 1 place to fish for Sea Trout for me, and that's the River Towy.
Click to expand...

Or my other favourite places....River Teifi, Lampeter, Llandysul.....

good run on my local chalk stream, the kent stour

I took these photos yesterday in a sleepy town (Britain’s smallest) called Fordwich in Kent. The famous river Stour here is supposedly home to a legendary creature, the Fordwich Trout. &#8220…

Total said:
Or my other favourite places....River Teifi, Lampeter, Llandysul.....
Click to expand...

Total, I'm right between them at Llanllwni give me a shout if you come this way again. Got an annex next door if you need a bed.
T

davej said:
Total, I'm right between them at Llanllwni give me a shout if you come this way again. Got an annex next door if you need a bed.
Click to expand...

Bless you Dave.........I haven't visited the area for 15 years, but my days of fly fishing for the beautiful sea trout are sadly finished. It's a beautiful part of Wales and have many good memories of the area. Thank you for your kind gesture. Be safe. Be well....

That's a shame, yes best thing i ever did moving here, getting used to the rain now.

Heard of them in Deben, Orwell and Suffolk Stour near me and in the Alde, Ore and Blyth.
Best bet being the Deben where regularly caught by bass anglers.
I

Jonathan Sutcliffe-Bland said:
Yes when I googled it, it took me to the Esk on the North Yorkshire Moors as a stocking venue. £275 a year to fish it ?
Click to expand...

Welcome to the wonderful (and periodically insanely expensive) of fly fishing. Yes £275 isn't an uncommon price in 'game' fishing. Especially on a 'prestigious' river or for a lot of fishing. For example my main 'fly only' club is £125 for 9 miles on the Usk. Conversely there's a local 'all methods' club that's £65 for a load of lakes, canal and 4 miles on the Usk, so it doesn't need to be expensive. Tho the Usk isn't regarded as a sea trout river. Basically if the river holds trout, then it almost certainly has a run of sea trout. Tho like all migratory fish they're suffering a bit at the moment for a number of reasons.

3lb is an ok size I think. But they do run a lot bigger. You're totally right they are beautiful fish. If they fight anything like brown trout, then must have been fun.

Total said:
Or my other favourite places....River Teifi, Lampeter, Llandysul.....
Click to expand...

Ahh the old alma mater (Lampeter). Never fished there, but I'd love to go back and give it a bash. It's not that far from my current home, so I should manage it one day.

Hooked one on the Wear at Chester-le-Street during a winter league match some thirty odd years ago - thought I was attached to a potential section winning chub so played it very carefully until it was almost in netting range. So carefully that I don't think the bloody thing knew it was hooked until I gave it a little more 'umph to get it's head up and it leapt out of the water. It didn't bust me so I carried on playing it for another 5 minutes, hoping for a short-sighted scalesman. Didn't matter in the end as it found a snag and the line parted - it was probably no more than 4 or 5lb but looked a lot larger when it jumped out of the water.

One the lads who fishes our club matches used be a commercial netsman fishing for salmon and sea-trout all along the east coast - there's a number of streams between the Esk and the Tees that have small runs of sea-trout at certain times of the year - the locals also tend to know when they've arrived too and many never make it to the spawning grounds.

I had a mental 2lber while fishing the pole at barmby on the marsh on the Yorkshire derwent. Luckily they let me weight it in and it got me £40. Fun on 5 elastic! 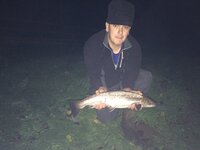 They have been caught and recorded in the higher reaches of the Mersey and Bollin. To do so they have to negotiate Manchester Ship canal. Personally I have seen Salmon jumping a weir on the Mersey, no I didn't. Believe it at first sight. Sort of a double take but there it was.

The Fall of an Icon in the Teifi