Rather apt for Sunday I think - also rather apt was the fact that, purely coincidentally, this was the Laidler Steels Trophy – one of two ‘all-nighters’ that we used to fish each season and as a bit of a nod to the trophy’s history a match that starts and finishes later than normal – today we’d be fishing 1.30-7.30pm.

Venue for the fourth time this season was the small pond at Dromonby Farm Fishery and we had eight anglers assembled for the 12.15 draw-time – although one angler who shall remain nameless (No he won’t - it was Matty) had failed to read his match calendar and turned up at 7am wondering where everybody else was.

If anything the pond was even lower than last time we fished it 10 days ago and with the bright, unbroken sunshine those pegs with some shade would be the plum draws. I pulled out peg 10 which is round the back of the island and a peg I drew for the same fixture two years ago when the water level was very similar – although it was considerably cooler 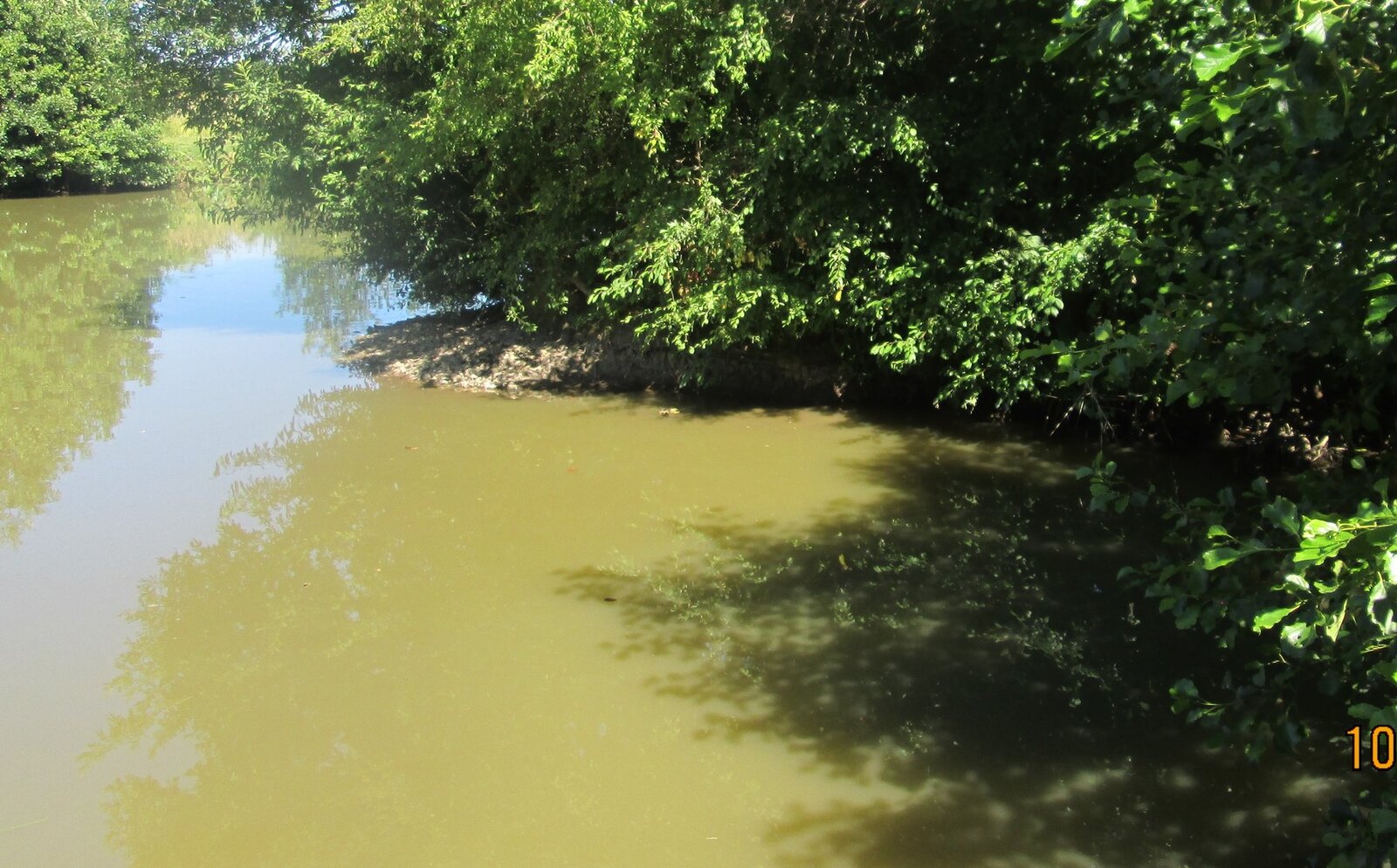 I had bushes on both sides, although I’ve never found fishing beneath them to be very productive on this pond and the one to my right was full of snags anyway. I dropped some bait in off the end of it as this was the deepest part of my peg – still only a couple of feet though. Across to the island it was only inches deep – backing off a couple of metres I had 12” or so and I fed that area with pellet and corn. I spent twenty minutes or so at the start fishing under the bush to my left but it was home only to small fish – as I proved when I switched to a single maggot. 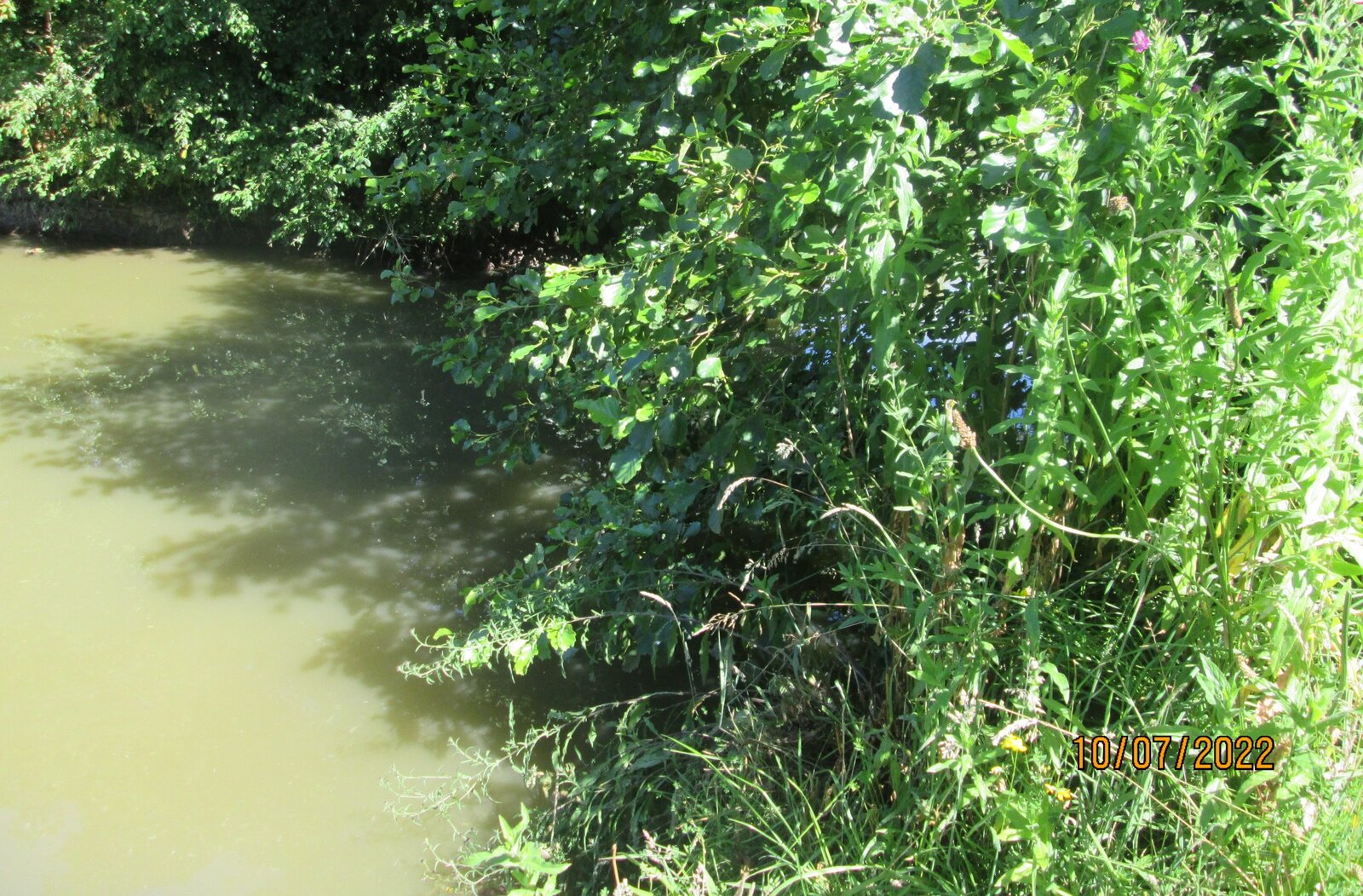 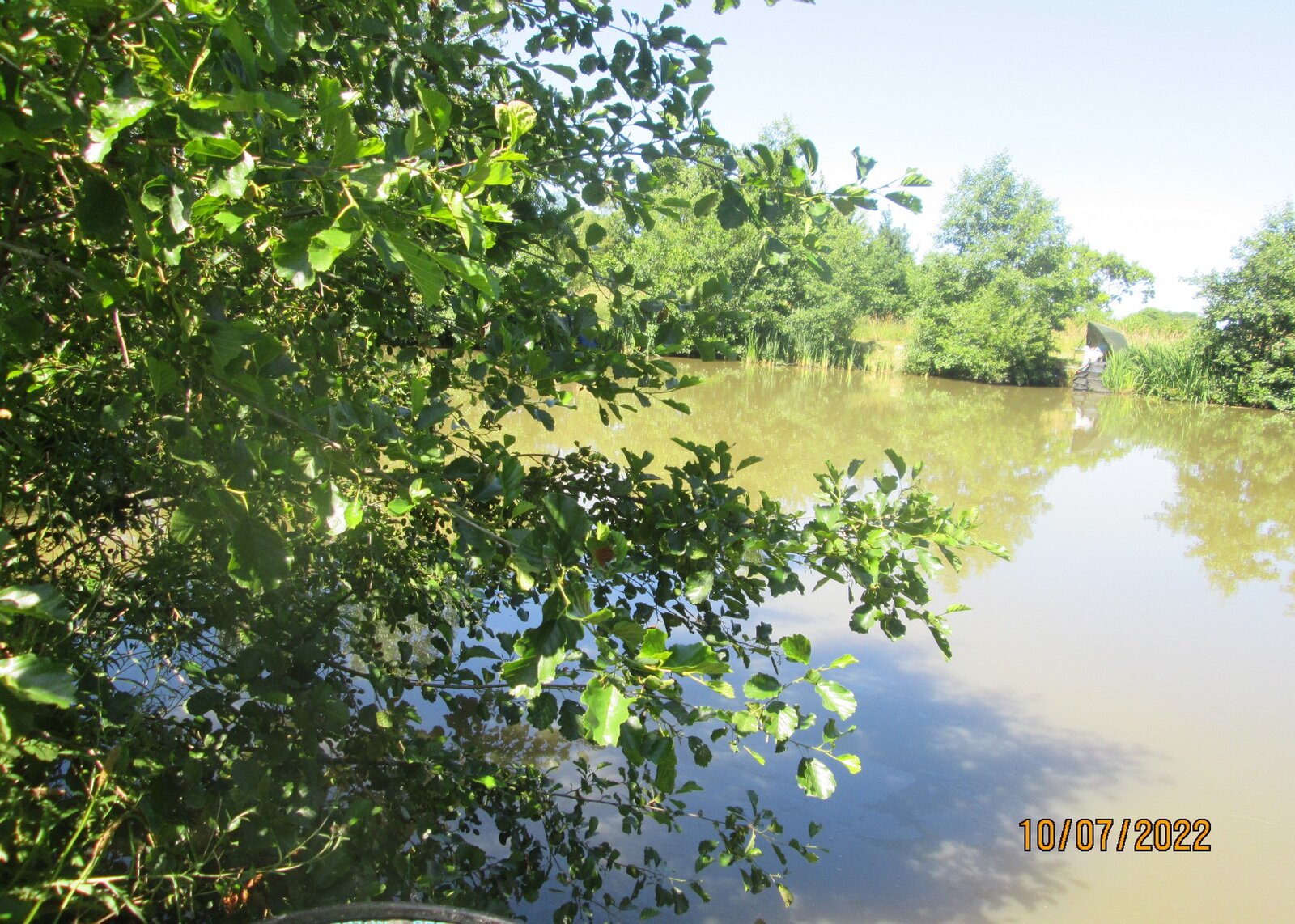 I switched to fishing a top three straight in front and quickly began to catch silvers – odd ones were decent sizes (2-3oz) but the majority were tiny. I persevered for a while but it wasn’t exactly fast and furious. I continued dropping bait in under the bush to my left however there was nothing of any size moving adjacent to the island – the water was so shallow I’d have spotted the fish. I had seen the very occasional swirl beyond pole range off the tip of the island – beyond the patch of shingle you can see on the first photo – so I had a few chucks with a small method feeder and a variety of hookbaits – other than small fish worrying the bait I never had a sniff. 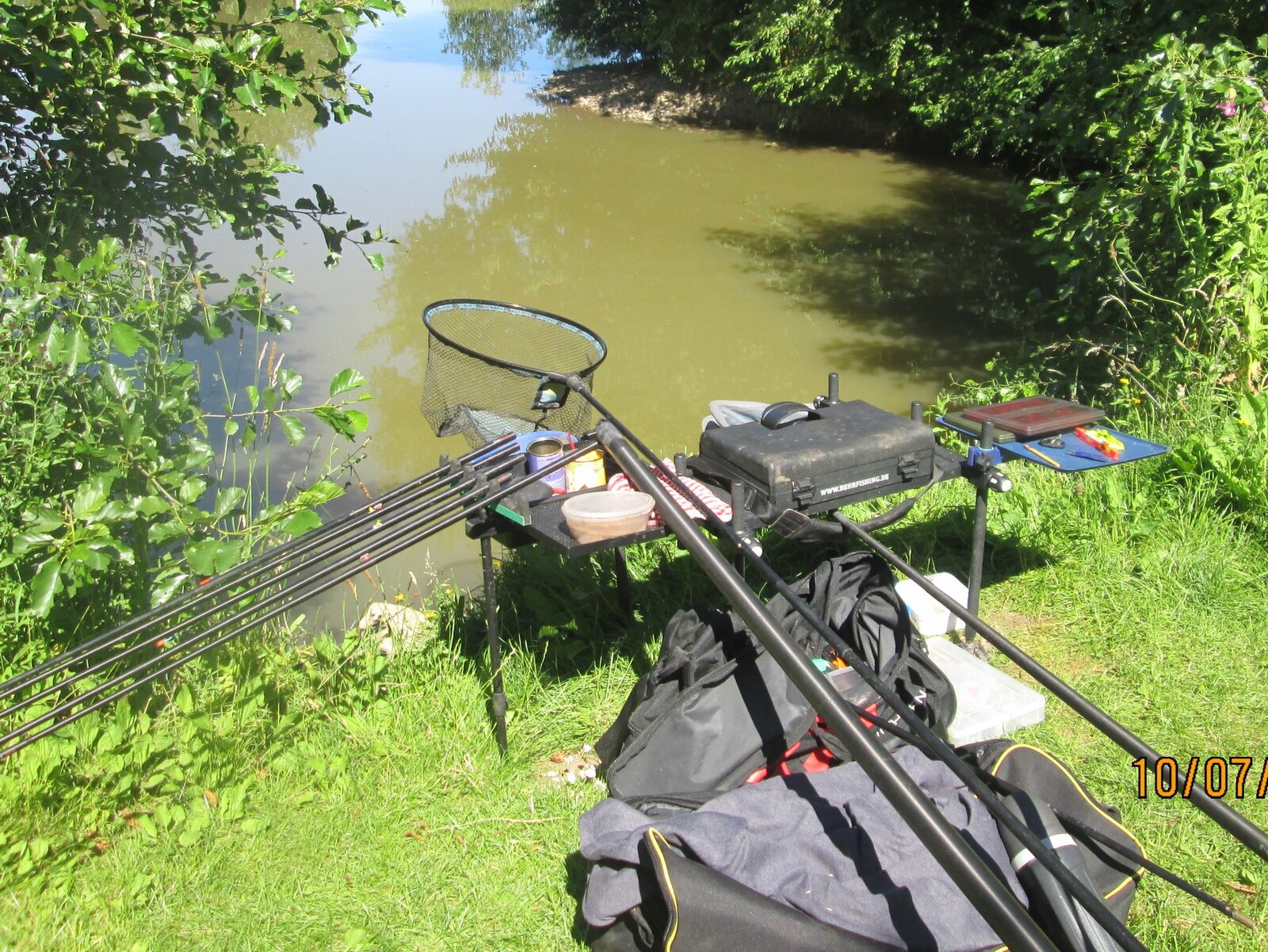 – only the third time I can recall this happening in the last 40 odd years. Had I thought it was a possibility I’d have taken a coolbag and a couple of ice-packs but the forecasted temperature was only around 24C. I know some people rate dead maggots – I use a few for hookbaits only – but I’d never feed them – casters are a far better option in my opinion. However I had no choice – they’re much lighter than live maggots so attracted the attention of tiny rudd and very little got down to the slightly bigger fish underneath so my catch rate plummeted. I riddled my maggots off and found I had a dozen live ones left so used these as hookbait ‘cos small silverfish prefer something that wriggles. 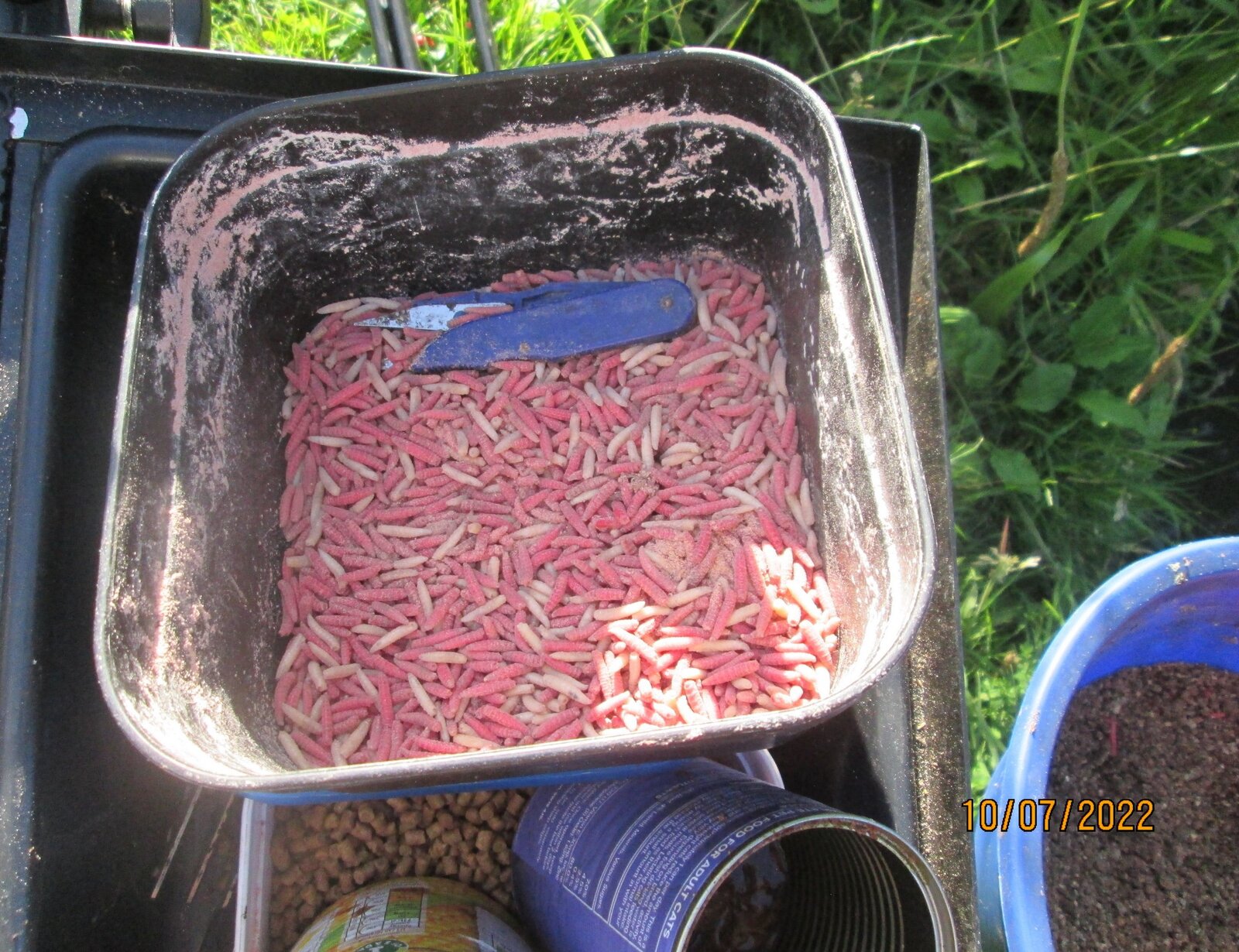 It was gone half five before the carp started to feed – Barry opposite me snared a small one on his trusty Stillwater Blue, Matty got a couple fishing tight to the reeds down his own bank in corner peg 11, Juliet found a couple of fish in the opposite corner and George to my left hooked one fishing down the margin. There were one or two fish getting closer to the island – I couldn’t catty pellets directly due to the overhanging trees so I fired into them instead and although no doubt the squirrels will have enjoyed the unexpected feast, enough fell into the water to attract the attention of a couple of fish. 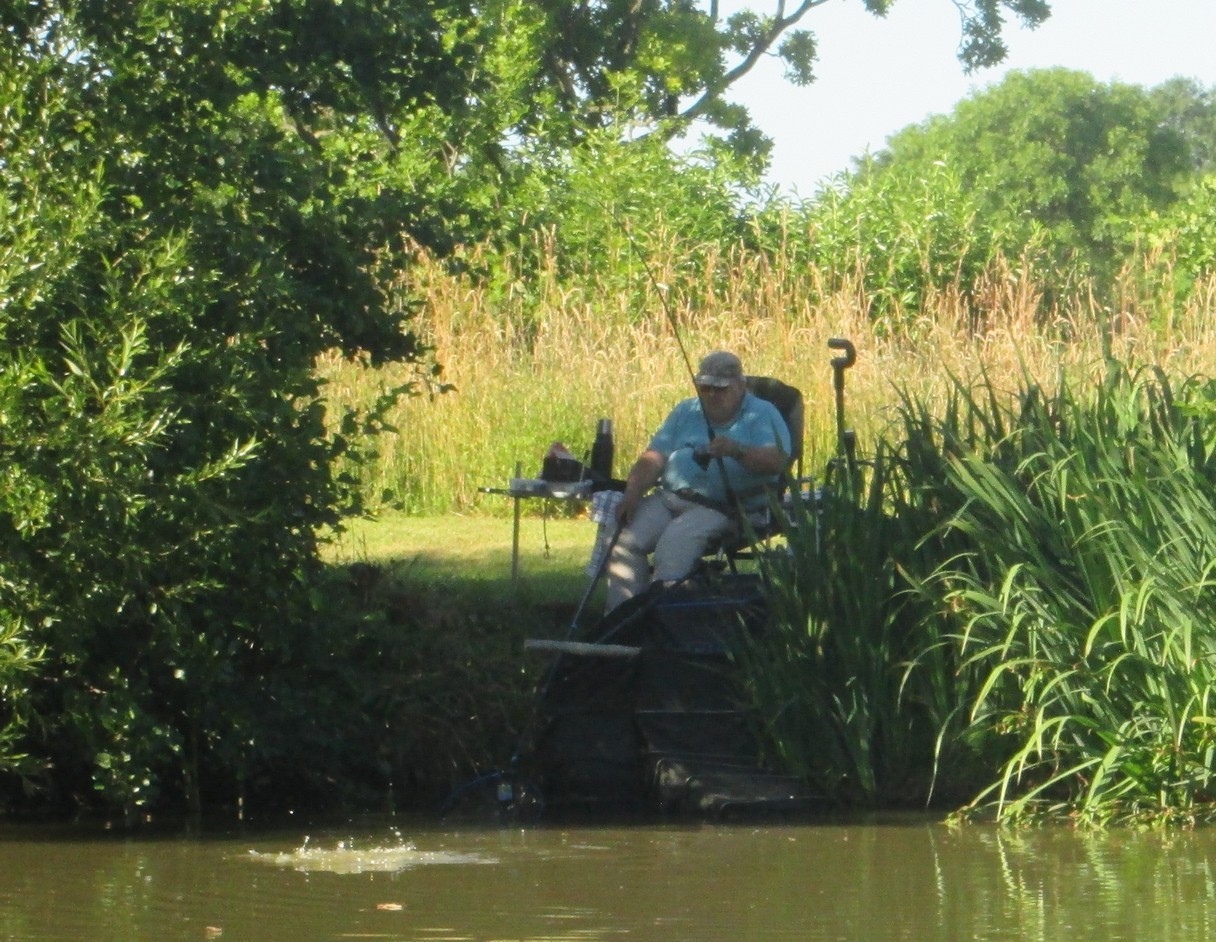 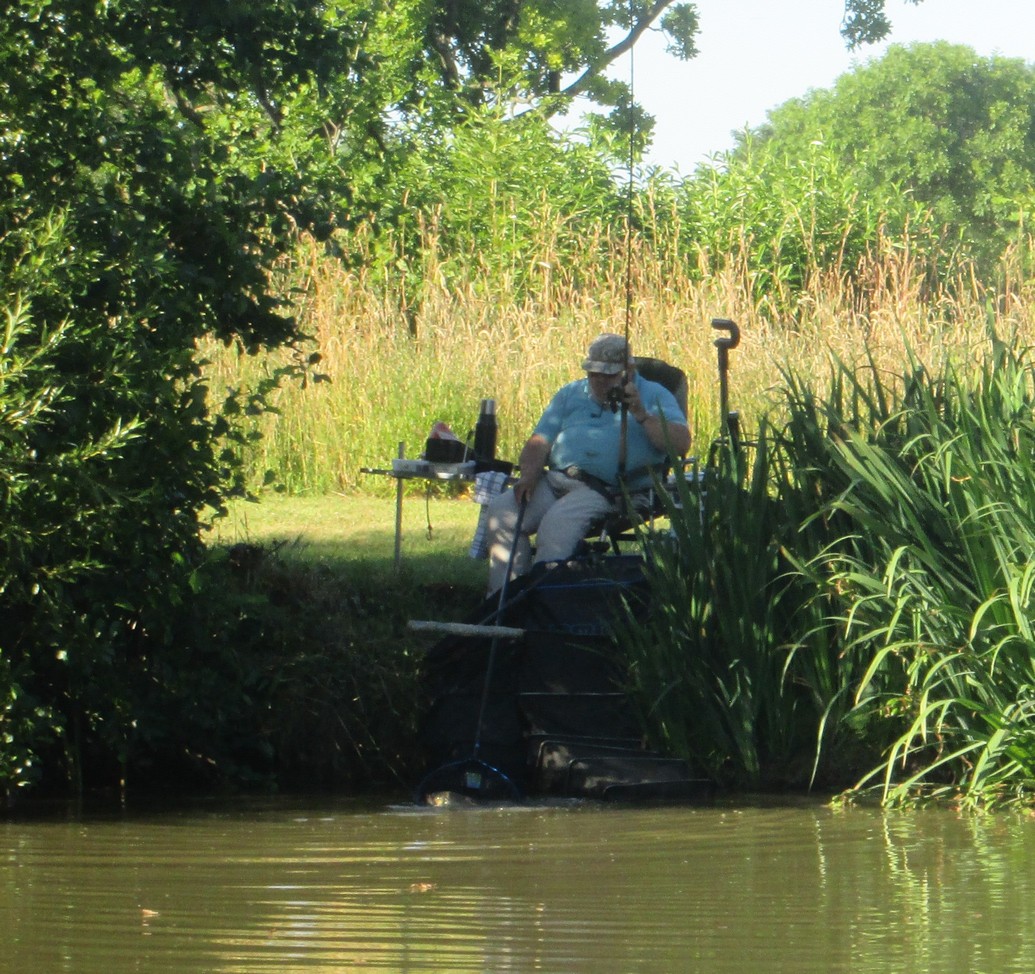 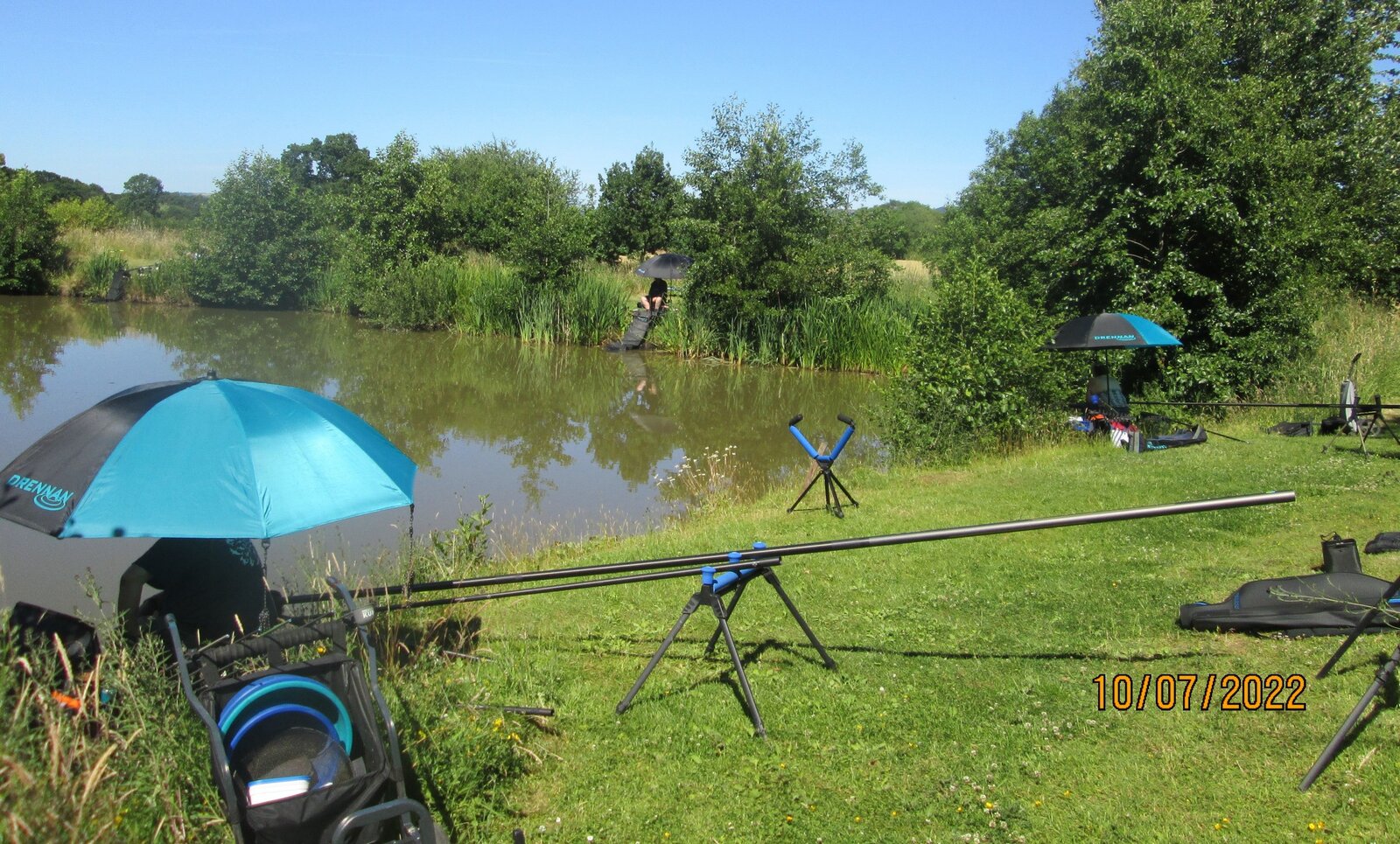 A bunch of five or six dead reds on the hook was swung out towards the fish I could see and it took the bait immediately – despite strenuous efforts to get into the tangle of tree roots just to the right of where I was fishing it was soon in the net – only a couple of pounds but very welcome. I was unlikely to get any lumps where I was fishing because the water was simply too shallow – anything over three or four pounds would need to swim on its side to get at the loose feed! 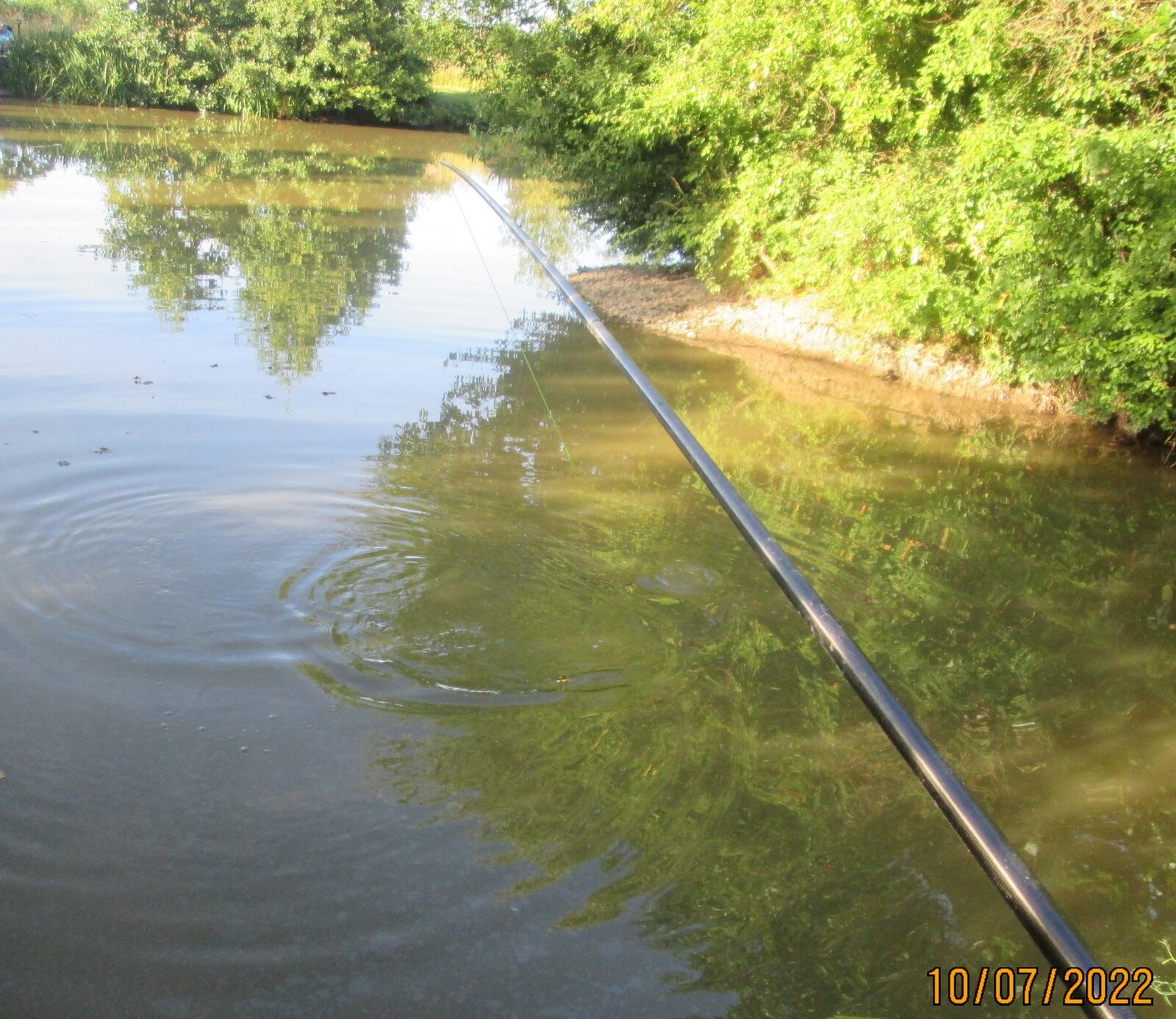 I kept pinging pellets in, just trying to mug any fish I spotted and succeeded in finding two more – neither of them big fish but together with the bits I’d caught earlier I was hoping for maybe eight pounds.

We started the weigh-in over with Ian on peg one who’d found (as had everyone on this bank) carp hard to come by and weighed 2lb 4oz of small silvers. Barry on peg five did have a carp but it wasn’t a large one, although he did briefly take the lead with 3lb dead. 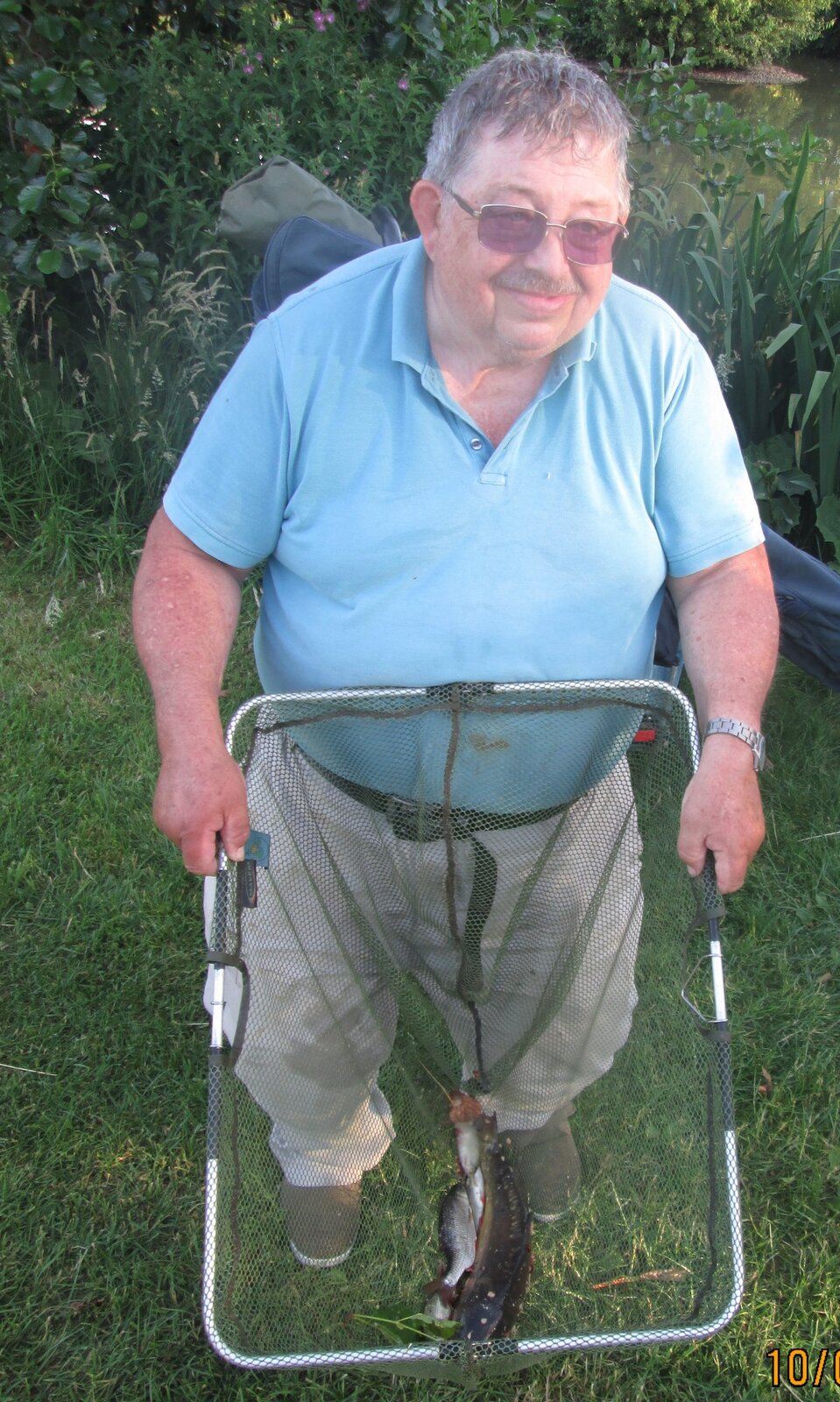 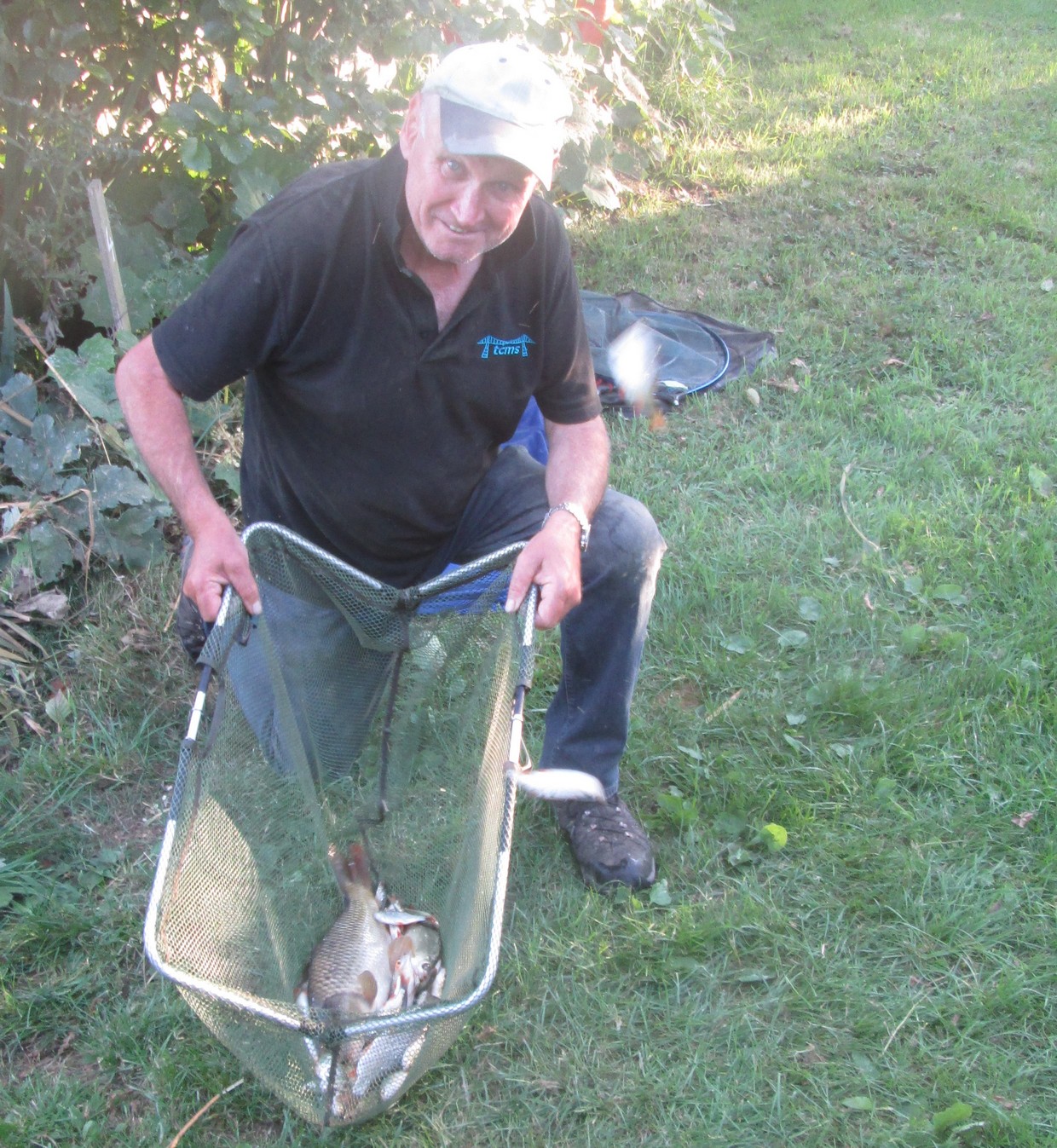 Weights improved around the corner – George had four carp – including one that he’d had to ‘fold in half’ in order to net it. His total was 13lb 13oz Juliet in the other corner found a couple of late fish and weighed 12lb 12oz for third spot. One more evening match at Dromonby on July 15th and then July 24th we’re back at Rising Sun – this is our annual shared match with Guisborough AC so we’ve got both lakes booked.

No wonder Matty won if he’d been there since 7am

Another good report, Simon. I always read them.

8am actually and I went home for a few hours much to the delight of the misses seeing as the kids weren't handling the Heat too well and being monkeys!