Been relishing the feel of light elastics and the toastiness of the trusty old skeetex wellies since sorting out my silvers rigs and with a planned Barbel trip for today cancelled in advance as we had dissected the can we/can't we rules and the how far can we go advice, today was the day for a try at some roach.........

Loading the car first thing it became clear that a frost had tried but only half heartedly, clearly giving up during the night as i read the air temperature as 2 degrees at 8am and observed the wet windscreen, to be honest and after prepping some bait the night before i was determined to get out, even if frosty been a little more severe.

Regarding the rigs and any rigs, i have over the years developed a habit of seemingly spending more time getting them all ready than actually using them, an activity i do enjoy, but on this occasion i let my need to go fishing overcome my ocd of going fishing before i had finished them all, knowing i had finished the 5-6-ft ones, with recent research seeing me prepare slim float rigs on .15 (can double as my F1 ones) and .11 and with wire stems with bulks for the deck and carbon stems with strung shotting for a slower fall.

On arrival anad just with the mist clearing, my view for the day became clear.... 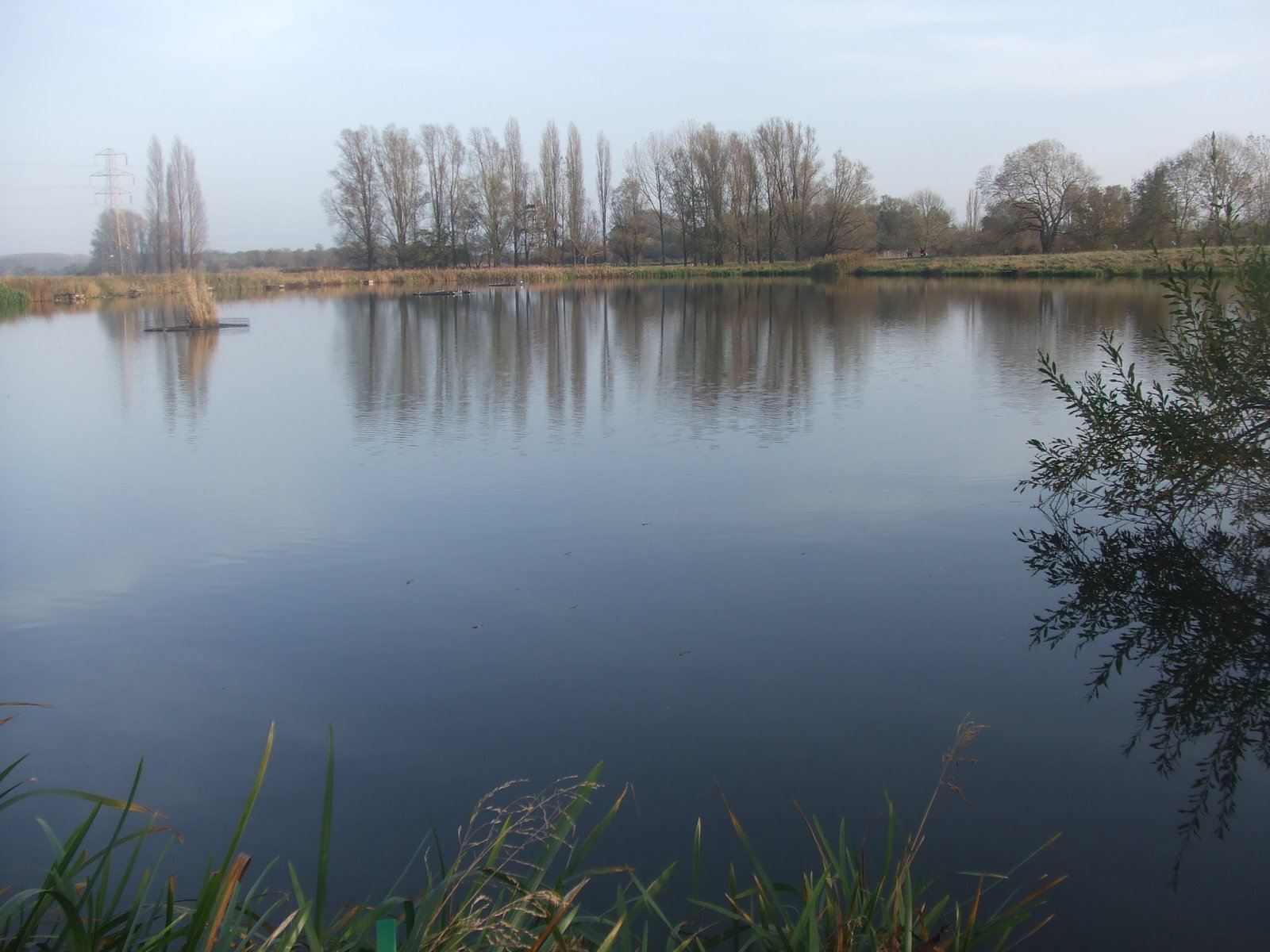 I had walked the adjacent willowbrook lake and with a view to fishing it, but with all the pegs occupied by 8.15am on the west bank and not fancying the opposite side as it would have meant going in next to someone else with most alternate pegs taken on that bank, i stood and took in the morning air. Greeting Hodge as he did one of his rounds, he justifiably thought i may have sat in the sun on such a morning, but it would soon be round on my back and the cover offered by the tree to the right may be offering some sanctuary for my target, despite some good colour in the water too. He advised also of plenty of pike activity in this North West corner of the lake, again, something i didn't mind and re-enforced my peg selection; the coarse angler finds the pike and hopefully finds the silvers too this time of year, with the pike angler probably following the opposite of this.

The peg itself offered a good 3ft near in and slowly deeping to 4.5ft at 6 metres, with the similar steady gradient continuing beyond. 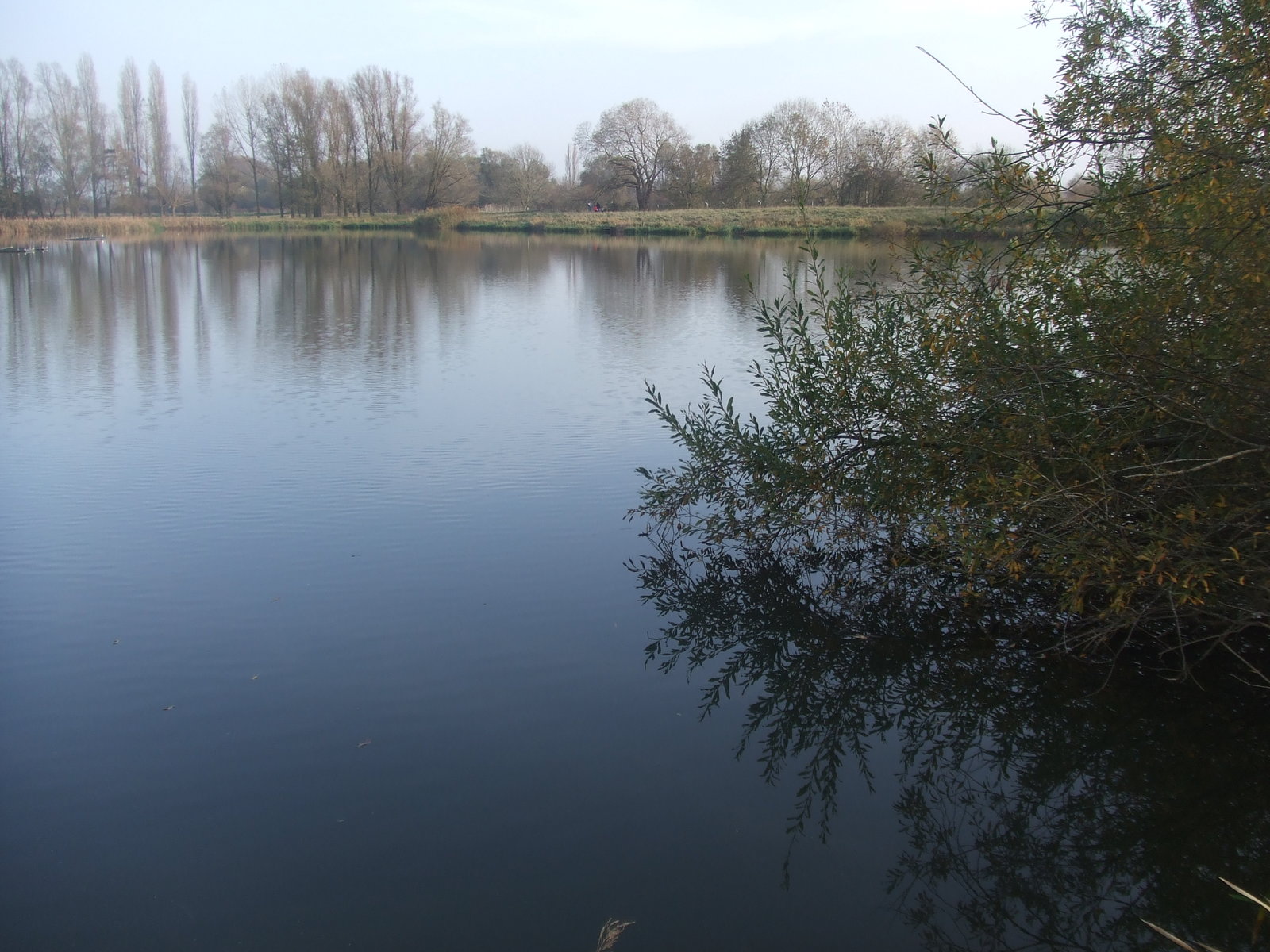 Opting for two lines, one to my left out in front and one to the tree, i set up with deck rigs, with a view fishing over groundbait fed sparingly as nuggets, with maggots as the main hookbait, with some worm if needed, but with expanders if i felt the fish wanted a bit more than a humble red, a nice simple and roomy bait tray today. 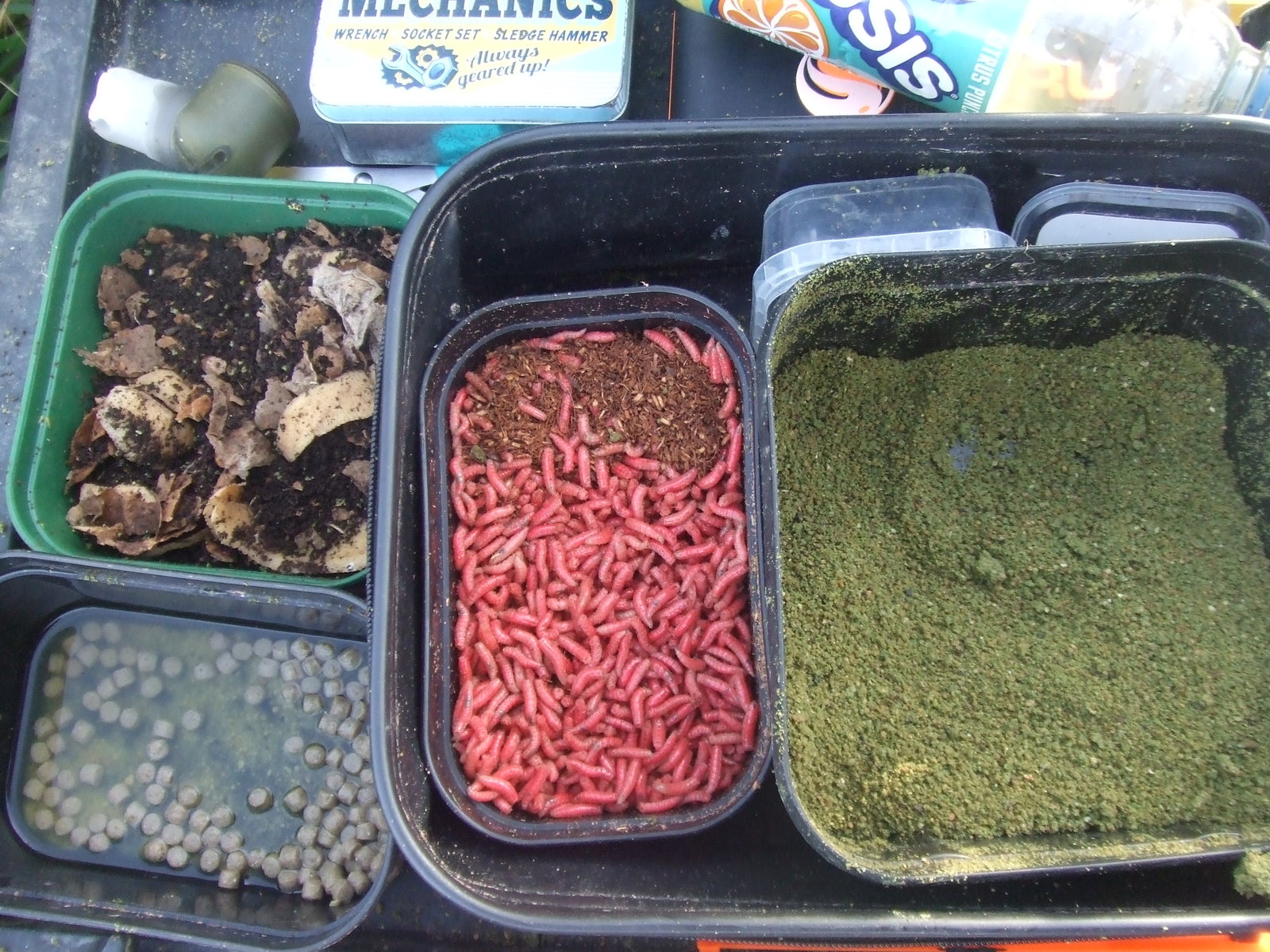 A bit of gardening on arrival to access the peg and to fit my roost out behind and i was all set, a bit of buzz and anticipation building as i fine tuned the rigs with some slight additions to the shotting. 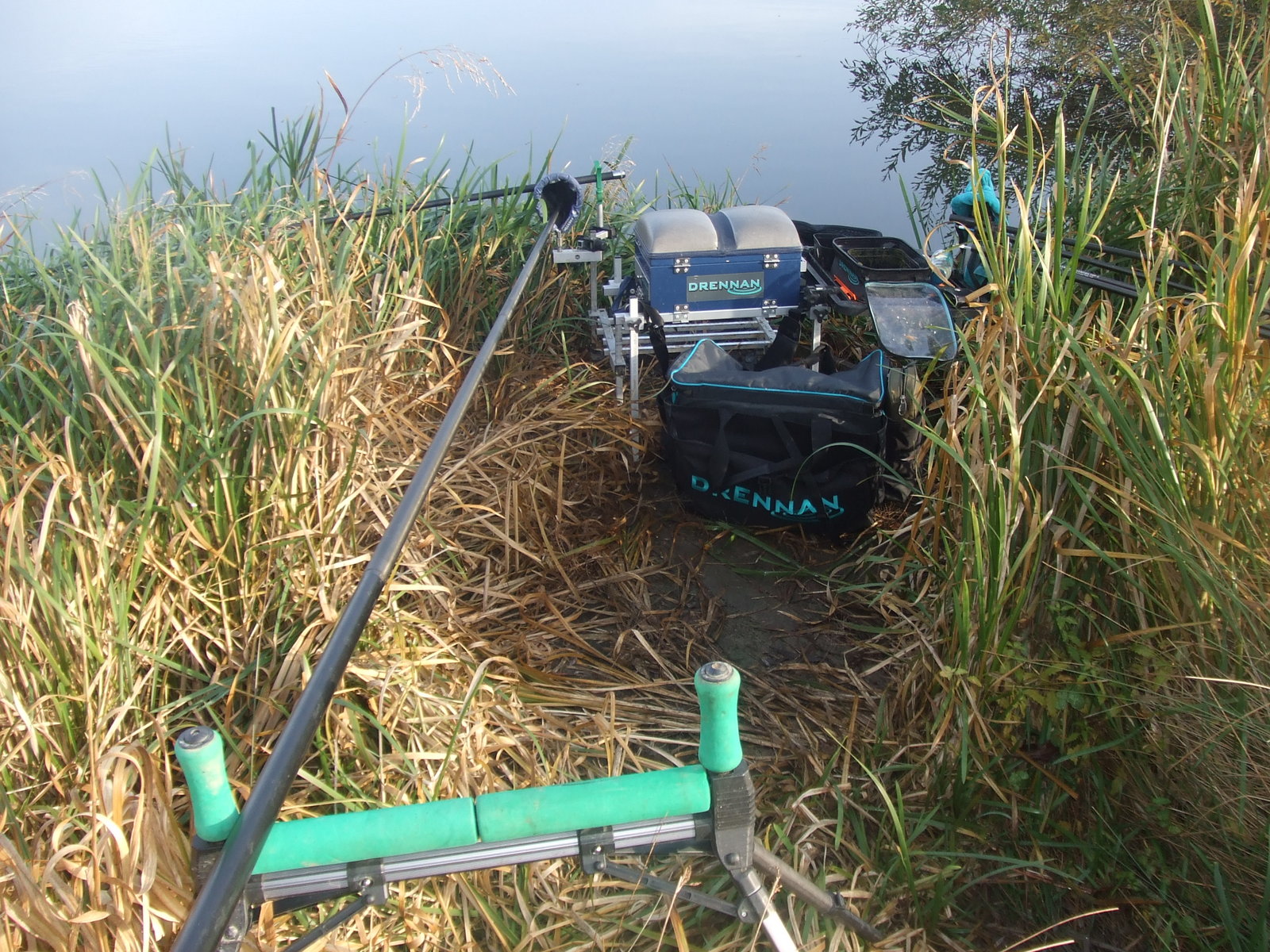 Feeding both lines the same with groundbait, a few maggots and a little of chopped worm i started out long and immediately cursed when my float slipped under, not something i am usually disappointed at of course, but i was convinced i had sorted the shotting post plumbing and proceeded to tweak the rig, adding/subtracting and ended up with it being perfect with exactly the same shotting as when i had started............the shotting was fine and it was simply a missed bite, i would like to say i quickly realised, but i hadn't, a bite first drop in had simply taken me by surprise....

Alternating between long and the tree, with feeding and leaving, working best as the fish came, i then had a visitor who snapped up their breakfast, confirming my choice of a 9 hollow elastic being the right one and to aid any swinging to hand also, i played old essox until it insisted on turning and swallowing my roach, at least just a new hooklength was the only repair needed. In a way, and no more pike trouble confirmed this, i felt it might pop in then leave me alone, so the disruption was out of the way and quite early on.

With maggot being taken keenly and watching my groundbait stock drop quicker than i thought it may have, i switched over to a 4mm expander on the tree line, the bites came still and although most of the bites had been on the bottom, the expander did seem to ensure that i could get a bait down to my feed un-interrupted. My aim of the session and what i was expecting was changing from just try and get a few bites anywhere and at any level, to seeing and encouraging bites on the expanders, from what were a better stamp of fish. 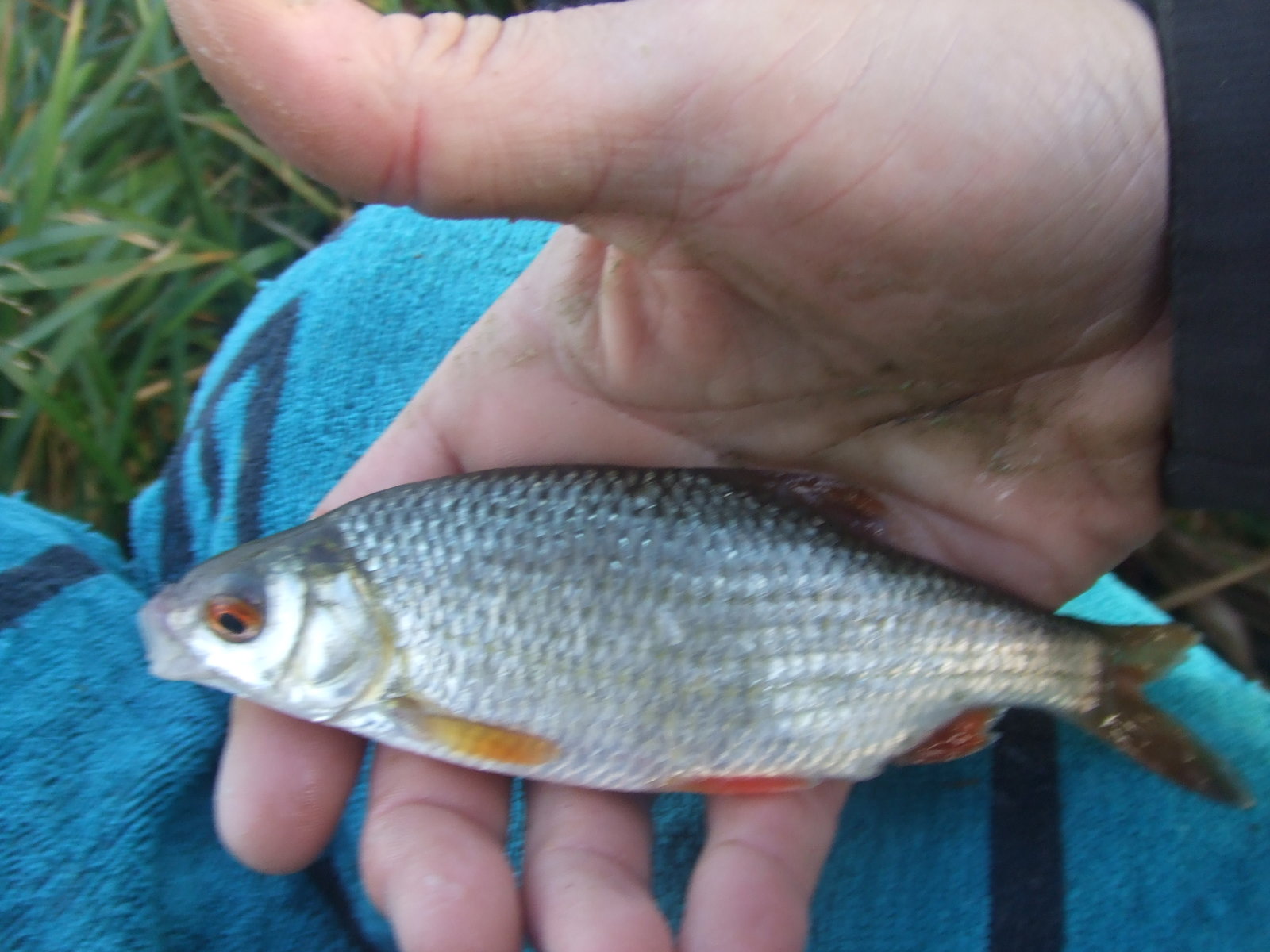 With the sun coming around onto my back i was more than comfortable, until an Easterly breeze cancelled it out and saw me reach for the coat after adding an inch of depth to combat it. The sun was having an effect on the fish however and i noted the bites coming off bottom on the long left line, so switching that rig for a slow fall one, i shipped out a maggot again, their durability being better for some surprising speed fishing i hadn't anticipated, although i do have to say on that front, the sonu expanders are now the best i have used i feel and make me less critical of my decision to sell my pellet pump on a clear out some time back.

I could have sat there all day given the session was surpassing my expectations i had at the start, so i set myself a challenge of another pound on the drop as it approached 2pm and with the seventh of the next run of fish taking me to that target i estimated and the draw of a cosy front room and the 'other' teams results to come in i headed for the sofa after packing up and a quick picture of the real sport of the day. 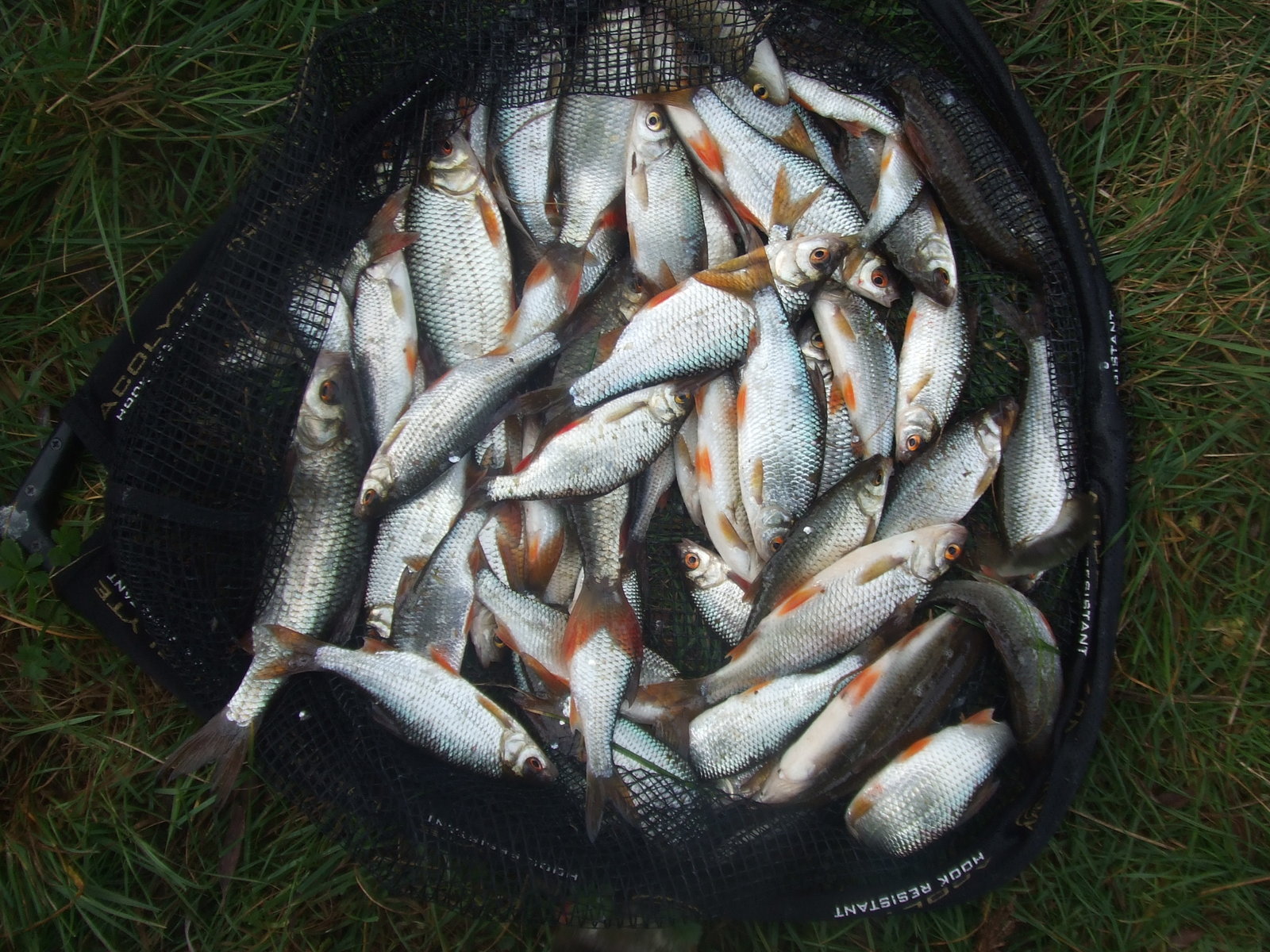 It's only been a little over a fortnight since my last one but I'm already itching for another roach session! Just waiting for it warm up a bit as apparently the last few days frosts coupled with the high water has killed it for now ?

Cracking netfull Chris nice one. Do you reckon missing the first bite was down to being in Barbel mode and usually having to wait hours for a bite.

Cheers Kev, either that or just waiting to grab the rod, the un-purist Barbel way.

Looking at your bait tray I was mystified by the mushrooms, have never heard of them being used as bait for silvers.
Last edited: Nov 7, 2020

That will be potato skins and remains of old tea bags mate. Mushrooms
What happens when i do a scrape of the wormery in the dark, got about 6 worms in there somewhere....

Here, there and everywhere.

Good days work there mate, and good write up.

Best net I ever had was 12lb on a summers afternoon. Crocs are not Wisey (and definitely not mine ?), they’re Mrs Whiskers...

Nice write up , that's the peg Steve Ringer did an article on many moons ago , fishing short pole to the bush if I remember rightly .

Cheers, yes it was, where he simulated targeting silvers during quiet spells of a carp match, he got a bonus tench too. I drew that peg a few years back in a summer match........and managed about two pounds.

Best net I ever had was 12lb on a summers afternoon. Crocs are not Wisey (and definitely not mine ?), they’re Mrs Whiskers...
Click to expand...

Cheers mate. I know they aren't yours, yours are lime green and dark blue aren't they?

Northantslad said:
Cheers, yes it was, where he simulated targeting silvers during quiet spells of a carp match, he got a bonus tench too. I drew that peg a few years back in a summer match........and managed about two pounds.
Click to expand...

Yes never know it to compete with the usual suspects , 28 etc ..

Depends what the light levels are and what that wind is doing i suppose. Yes the mid to late 20s can be the ones especially with a SW pushing into them.