After having a pretty awful 6 months with mental health problems, Saturday was my first proper trip out fishing since October 2020. Without going in to too much detail on this thread; I attempted to take my own life in December and have had problems returning to a normal way of life ever since. Without my family and close friends I’d have not seen 2021, but things are improving and I now enjoy waking up each morning.

Anyway, onto the fishing. I thought I’d give the rivers a miss until there’s a bit more water in them and the crowds had died down a bit. So after an early alarm I was on the side of my favourite Tench water, Napton Reservoir, at 5am. I was the only one there so I had the choice of pegs. I decided to fish a peg I’d not fished before and set up a Feeder rod with a 30g Method feeder with a 10mm pop up and another with a small cage feeder on a Heli rig fishing with a fake and real red maggot.

After a quiet first hour I decided to try the Waggler rod so reeled in the cage feeder rod and set about fishing the waggler. There was about 4ft of water 3 rod lengths out so fed it with a couple of balls of groundbait, half a tin of corn and 4 or 5 pouches of maggots. First cast and the float hadn’t even settled when it disappeared and after a spirited fight I landed a Rudd of about 8oz. What followed was unbelievable. I had a fish/bite every cast. Every fish was a Rudd. I shallowed up to a foot and fished either corn or 2 red maggots. During this frenzy my feeder rod went off and I soon had a nice Tench of 4lb 9oz on the bank.

I wouldn’t say I got bored of catching Rudd but my arm was dropping off so I set the waggler back to full depth, put a BB 6 inches from my hook and fished corn on the hook. After 20 minutes I had a nice Tench on which gave up a good fight before I had it on the bank. 2 more followed before I shallowed up and started catching the Rudd again. While reeling in a Rudd a Pike launched itself out of the water but missed the Rudd. 2 casts later it did the same thing but this time connected with my fish. I was waiting for the inevitable to happen, but it didn’t! After 15 minutes I managed to net a fairly decent Pike. This was landed on 4lb mainline and a size 14 hook. It weighed in at 12lb 9oz.

Sorry for the waffly right up, it’s been a while since I’ve had to do one! 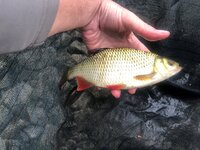 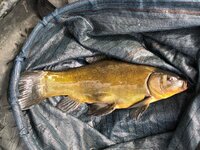 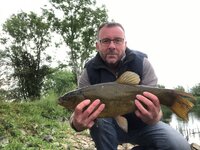 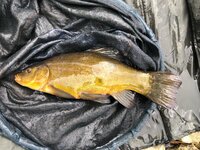 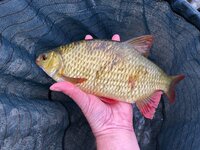 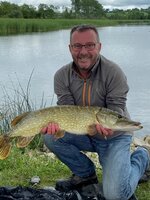 Looks and sounds like a good day to me

That’s a fantastic days fishing if you ask me. Some gorgeous Rudd and tench and then to land that pike too, brilliant stuff.

Also well done for getting through the tough times.

Great to see you back on here @bezzer! Some lovely fish there.

Every fish is a corker, not so keen on the pike but fair play on landing it. Keep getting bankside leave the dark days behind mate.

bezzer said:
Sorry for the waffly right up, it’s been a while since I’ve had to do one!
Click to expand...

No need to apologise Ian, feel free to waffle away.
A lovely report of your return to the bankside, some cracking fish there in the photos and the smile on your face shows just how much you enjoyed it.
Looking forward to your next report.

Glad to have you back Ian.
Missed the early Tench reports mate.

Welcome back, you always came across as one of the [more] "normal" people on here so that was a surprise to hear.

A good report of a good days fishing .
Y

Brilliant report and what a day's fishing! I hope you're feeling I'm a better place, it's tough but like Captain Tom always said, tommorow will be a better day.
Take care my friend

That'll put a spring back in your step.

Great report. and it is great news you have had the support at a time you need it. Onwards and upwards

What a cracking report and pictures. Nice one, so nice to see Rudd, a lovely fish.

Not a "waffley" at all. Great people on here which I feel confident in saying you can talk to via PM if things are bad mate, myself included. If it helps I've been there and can relate. Looking forward to the next report..

P.s. cracking job with the big old Esox. I would have ran lol.

Good to hear from you mate, great fish.

What a great days fishing. Well done and the smile on your face says it all. Glad your feeling better and have come out the other side intact. Onwards and upwards as they say.

Tench, a good start and a bad ending.