After a stuttering start to my match fishing escapades, just 2 Winter League club matches before the latest lockdown and suspension of all matches, I was looking forward to getting back into it with my first match with a new (to me) angling society.

I’d got chatting to a couple of blokes whilst pleasure fishing a few weeks ago, and got invited to join their society, they fish matches every Sunday at a variety of commercials around the Cambridge/Huntingdon/Peterborough area.

Magpie lake at Rookery was the location for my debut, in a field of 28 anglers. Socially distanced draw and a very well organised drive-thru bait shop and net dip saw me heading to my home for the day, peg 5. 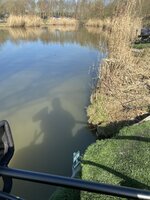 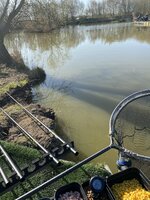 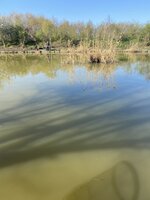 First observations were good, a Reed bed that I could reach with my 13m pole, and margins on both sides. I’d researched baits and methods during the week, and knew what my starting lines would be.

Not so positive was the DNW registered from the peg in the open match the day prior, in fact the whole section was either DNW or lowish weights. Still, new day etc.

Id be fishing to the reeds in front with expander over micros, in about 4ft of depth, I’d have a meat line at 6m on the deck, and two margin lines for later on with Groundbait and maggots one side, Groundbait and corn the other.

All in at 10am, and got straight out on my long line to the reeds, sprinkled some micros and set my trap. Almost instantly the float wobbled, and buried itself. A quick strike and elastic streaming. My initial high was very quickly tempered by the realisation that the fish had headed straight into the reeds, and despite my best efforts was not coming out. A couple of minutes of coaxing paid no dividend, and ultimately it threw the hook and dashed my hopes of a quick start. Decided to lightly feed some micros and leave it for a while to settle, given the disturbance.

Fed the meat line, depth was identical right across the peg at 6 metres, so spent half an hour there, with nothing but line bites, it was pretty clear that the 6ft maximum depth was not where the fish wanted to be.

Back out to the shallower long line, and managed to land a couple of F1’s to get me off the mark. Around me it seemed that most were struggling, so no alarm bells yet. A decent fish on the long line, a carp of 5-6lb had me estimating 7-8lb after a couple of hours. Had another snagging issue in the reeds soon after, I realised I was probably a bit undergunned with the 10-12 Slik I was using, whilst it handled the smaller 1-3lbers, anything bigger just seemed to bury itself in the reeds, and it was pot luck whether they came out or not.

Tried the left margin at the halfway point, first put-in produced a carp of 3-4lb, then nothing else. The right margin was unproductive, so I was soon out to the long line again, although a meter or so further away from the reeds and with a heavier 14-16 Slik just in case. Three F1s in 10 minutes had me hopeful of a productive second half of the match, but then it went dead.

Tried the meat line again, nothing, tried the same spots with micros and corn, no dice.

Had been continually (but lightly) feeding both margins with maggots and corn respectively, so stopped in on both for 15 mins each, producing a3lb carp from the right hand side.

Rotated on each of the lines at 10 minute intervals until the last half hour, when I went back to the margins, but produced very little.

Weighed in 17lb 8oz, was happy enough but knew it should have been more. I lost 4 fish, which if I’d landed them would have put me up with the rest of my section (averaged 30lb other than the section winner who had 60lb).

Need to work out shallow fishing, the guys around me were catching sporadically somewhere between 2-4feet, I tried it to or half an hour in the middle but to be honest didn’t really know what I was doing.

Match was won with 122lb on the noted flyer on this lake peg 36, right round the other side from where I was located.

1) Gear up heavier if fishing near reeds/snags

2) Learn the basics of shallow fishing

Next match is this coming Sunday, at another new venue for me. A snake lake for the first time (Honeysuckle at Lawn Farm Fishery, Camborne) I’m hoping that the cold spell this week might encourage the fish back down to the deck, as I definitely feel more comfortable with this)

In summary, had a good day, caught a few, lost a few, could have been better but thoroughly enjoyed myself.
A

Lessons learned and that is always a bonus

Good write up as always, Stewie & sounds like you worked hard for your catch.
N

Always worth trying the method feeder at Magpie. I fished with a friend 2 weeks ago they fished the pole and I was on the method. I finished with around 15 carp including 2 doubles and my friend on the pole struggled and only managed 5 or 6 small carp.

nigeljohn123 said:
Always worth trying the method feeder at Magpie. I fished with a friend 2 weeks ago they fished the pole and I was on the method. I finished with around 15 carp including 2 doubles and my friend on the pole struggled and only managed 5 or 6 small carp.
Click to expand...

In a match? What peg were you fishing, one of the ones with an island Chuck?
N

Tench, a good start and a bad ending.

Another evening at the club lake