Hmmmm, an interesting experience, and another new lake for me.

47 peg snake lake, 15m across, we would be fishing pegs 18-47, however as there were only 13 of us due to date clashes and late dropouts, we would have plenty of space.

I was drawn peg 37, just before a corner with spare pegs either side. It looked a bit like this: 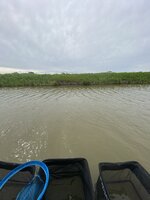 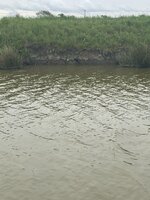 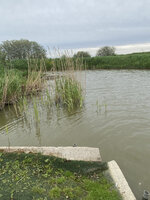 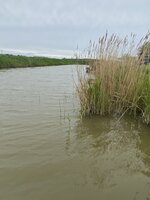 Parking was directly behind the peg, so a big thumbs up from me

Decent looking reedy margins either side, a nice flat shelf to fish on, and reeds moving as I was setting up.

Fishing across was more problematic, the mud line opposite was out of the question as I’m still working with 13m of MTX1, however with the extension I could just get to the far shelf pretty close to the reeds on either side. Forecast was for fairly high winds, so I was doubtful that long pole would be a viable option for long. The wind direction was from my right to left, and by the all-in it was starting to blow...

I set up margin rigs both side, a 13m long line to the reeds and a top2+2 rig that was good for 3 different lines at that distance. 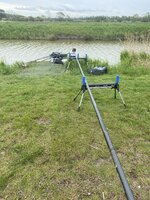 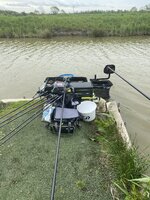 The all in was called, and I fed the long line and the 2+2 lines, and shipped out to the reeds at 13m. Found it really difficult to present the rig, the wind was blowing the pole to the left, and despite backshot, a heavier float than the 30 inches should have needed, being a couple of inches over depth and holding on for dear life, it became very clear, very quickly that unless the wind dropped significantly I was not equipped technically or physically to fish long pole in those conditions.

I did have a couple of small carp long in the 15 minutes that I persevered with it, and lost one, which felt like a decent fish as well, but I decided at that point to bite the bullet and sack off the long line unless the wind dropped.

Even fishing the top 2+2 lines was difficult, albeit slightly less traumatic than the long lines. In 90 minutes I added 7 or 8 carp, mostly 1-2lb with a couple of 3-4lbers thrown in, and a handful of roach, all caught on meat.

At the halfway mark I fed the margin to my left with Groundbait and 4mm pellets, and had an interesting hour, highlights of which included a 6lb ghostie which felt like a small automobile, and getting smashed up in the reeds twice (I had 16 Slik, 0.19 to 0.15 reflo so probably a technique issue, not getting them away from the reeds quick enough).

The wind was getting worse, there were proper waves flowing past me, the rain had starting coming down, so I decided a change of plan was required. I chucked the feeder out, about a 20m chuck to the corner, on the shelf.

Proved to be a decent decision as it produced 3 more carp of 2-3lb and my fish of the day, which was close to if not a double figure common. Fought like stink and took about 10 minutes to net. At one point it went round the corner and I think my neighbour could have netted it.

Anyway, the last 2 hours were spent alternating between my right margin on maggot over Groundbait and the feeder, both produced sporadically but not prolifically.

The weigh in started, I was forecasting 35-40lb. Halfway round there were several weights similar to my forecast, then a row of guys that fish the venue’s opens regularly stacked 58lb, 62lb, 109lb and 58lb on the scales. Next was me, and I weighed in 43lb 11oz, slightly more than I’d forecast, and 5th place with 4 more to weigh in.

The last guy to weigh in had 69lb for second place, pushing me down to 6th overall out of 13.

Pretty pleased given the circumstances, the weather, and the fact that the 5 anglers that beat me are vastly superior in terms of experience and knowledge. I look at it that I came top in division 2, if that makes sense.

Back on the same lake next Sunday with the match group I’ve started fishing with, will have a bit of venue knowledge but less space (30 booked on so far)

Thankfully the weather forecast is infinitely better, I’m looking forward to it

Sounds like a battle against the elements mate - you did well to stay out on long pole as much as you did. Venue regulars are always going to be a challenge as well as those with 16m of carbon over 13m but you look to be doing brilliantly and sound like you are enjoying it too.

Keep up the good work and the match reports

32 I think, the guy on it fishes Rookery opens every Saturday.

OldTaff said:
Sounds like a battle against the elements mate - you did well to stay out on long pole as much as you did. Venue regulars are always going to be a challenge as well as those with 16m of carbon over 13m but you look to be doing brilliantly and sound like you are enjoying it too.

Keep up the good work and the match reports
Click to expand...

It was tough to say the least mate.

I’ve got a 16m MTX3 on the way, should hopefully be here in early July, so that will open up my options a bit more, although even the most experienced anglers in the match yesterday didn’t fish long for more than an hour.

Well done Stewie. I have to say that I'm not a lover of snake lakes when there are plenty of empty pegs as I always feel it gives fish to much space to back off into, in my experience they always tend to fish better when all the pegs are occupied..

Nice result on a new lake. Jay is one of my favourites, I seem to do OK on it.

Certainly for me meat is a must have on the waters at Rookery. The interesting thing is that the margin shelf drops off around 9-12 inches like a cliff face on a line level with the front of the platforms*. The depth then stays level all the way across. Its not a water where I have ever felt I was missing out by not fishing across. Because of the profile the fish can turn up anywhere from bank to bank. So probably topkit +3 would be my longest reach. At the bottom of the margin "cliff" can work well, particularly if the tow moves the float along that line.

Can be tricky to get the feeding right. On one match I struggled until I cut the feed back to two cubes of meat and ten micros. Then I started to catch 6-7lb fish. I also upped the float to a 1g as it was a windy day. At around 4 1/2 ft deep that may seem overkill but it worked. I think many of the larger fish have been removed to help kick start the newly dug lakes. Magpie has a lot of new stockies in also.

* For those that don't know the lake the platforms are made of old concrete railway sleepers laid in a box outline out from the bank and then backfilled. So they go 9ft out into the lake and are 9ft wide. Covered with astroturf. So to fish the margins you need to face back towards the bank.
S

Great effort and well done Stewie
I’m there for a week in August. Really looking forward to it. Your posts only wet my appetite

Good effort again Stewie. We'll have to put you down in the "Experienced" column for Alders.

The Landlord said:
Good effort again Stewie. We'll have to put you down in the "Experienced" column for Alders.
Click to expand...

Definitely not mate, I’m a novice of the highest order.

Im fine when the fish are queuing up in front of me on the deck. Haven’t got a clue about shallow fishing, and if they’re not there I’m rubbish at making changes to find them.
G

Well done indeed, Stewie. A difficult lake to fish and, as 160642 has said, it's nearly always windy in the Fens, and 1 to 9 and approx 29-38 are running West-East so have the prevailing winds straight down. It used to be brilliant in the margins, but since the new platforms were put in, which jut out, not so good. Possibly they stop the fish cruising along the margins. But it's always well organised here, and the platforms themselves are brilliant.

G0zzer2 said:
Well done indeed, Stewie. A difficult lake to fish and, as 160642 has said, it's nearly always windy in the Fens, and 1 to 9 and approx 29-38 are running West-East so have the prevailing winds straight down. It used to be brilliant in the margins, but since the new platforms were put in, which jut out, not so good. Possibly they stop the fish cruising along the margins. But it's always well organised here, and the platforms themselves are brilliant.
Click to expand...

Cheers Mac, back on there this Sunday for another go

A day of firsts…