Had a day off work today, the other half away so only one thing to do. I decided to head to the Lea, usual tactics, one rod (Accy plus), bag of bait (half a pint each of frozen reds and whites, half a tin of corn, bread, worms) and rove about. Also decided to dust off the pin, just to make life more difficult

On arrival the river was low, slow and clear (surprise!) and only two others there. Spot on. 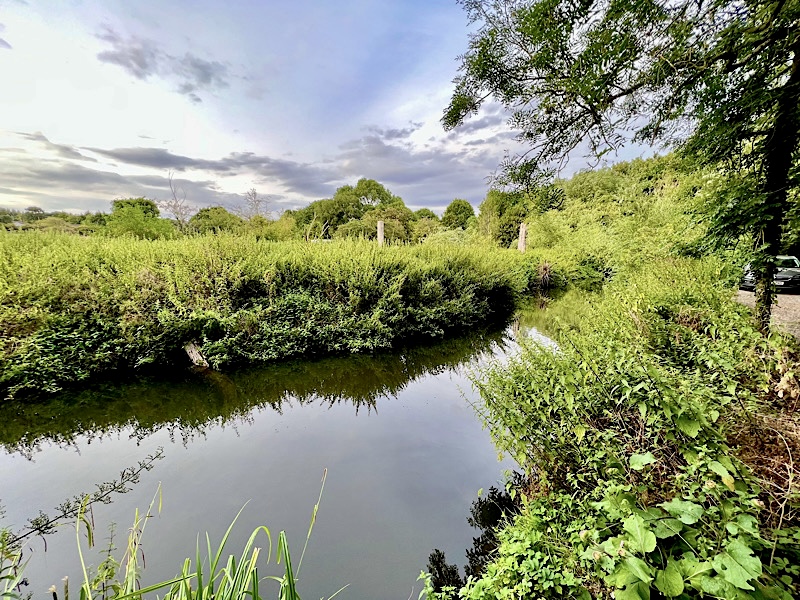 Had a quick walk around and saw a group of chub mooching about on bend under a tree. Out went a shallow stick and it was more or less a chublet a chuck. 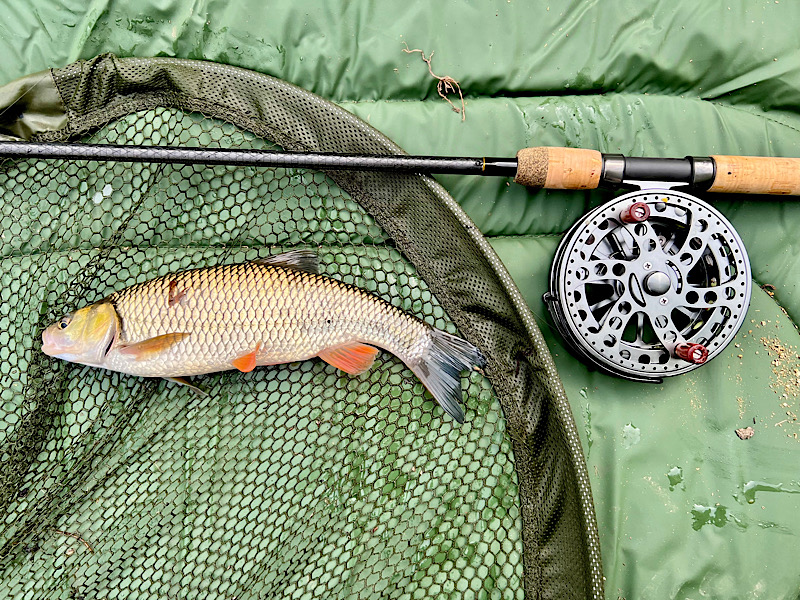 Good sport until the chub had enough of me and moved on. So did I. Dropped into the next swim stupidly skylining and I just caught sight of a small group of barbel heading off at high speed. Kept low, fed the swim for about 20 mins and they came back. A couple of run throughs with the float with a huge bunch of red maggots and I was in, the fish burying itself under the opposite bank. Kept the pressure on and eventually out it popped. 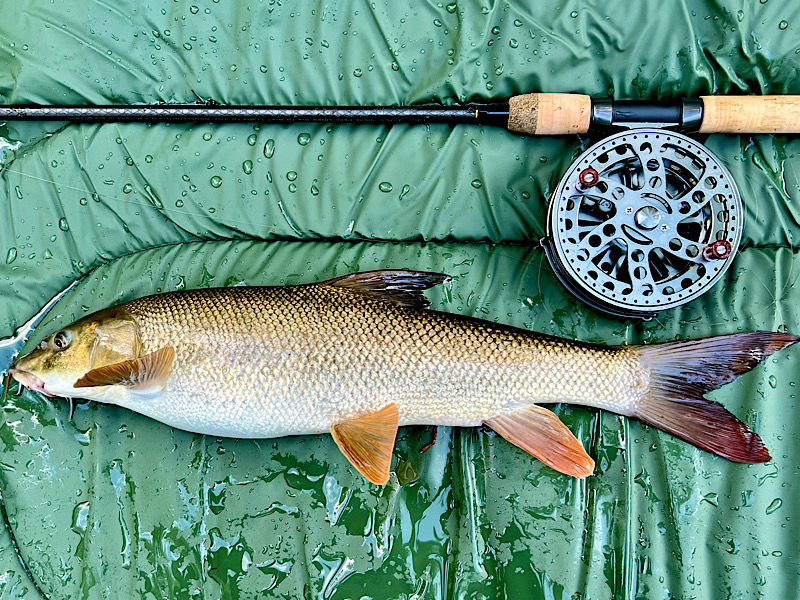 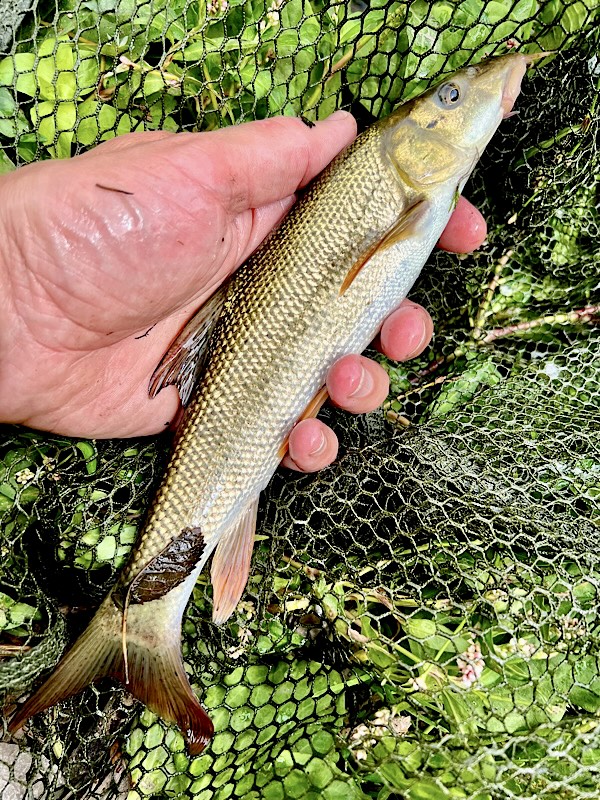 Now it was time to move on. Next swim was super shallow, time to deploy the Trent trotter. By this point reds where gone, thought I’d try corn. The float slowly edged through the swim, a barbel shot out and back in again, taking the float with it. A bit hairy in the shallow water but eventually in the net After all the commotion the other fish were still there but spooky, scattering at the sight of the float. Took it off and touch ledgered a pellet with just a single swan shot on the line. Happy days. 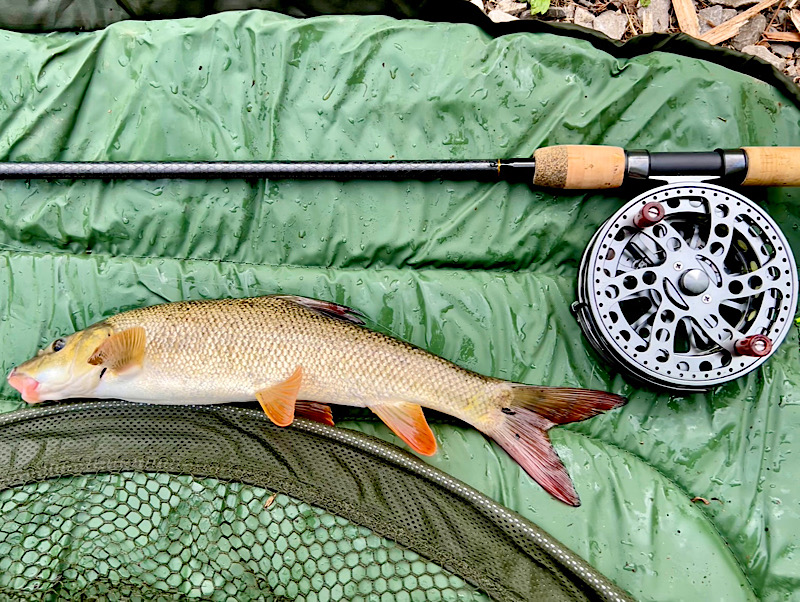 That finished the swim off, time to pack up and move again. Next swim I could see a small group of roach and chub. Back on with the stick, white maggs and bagged a few 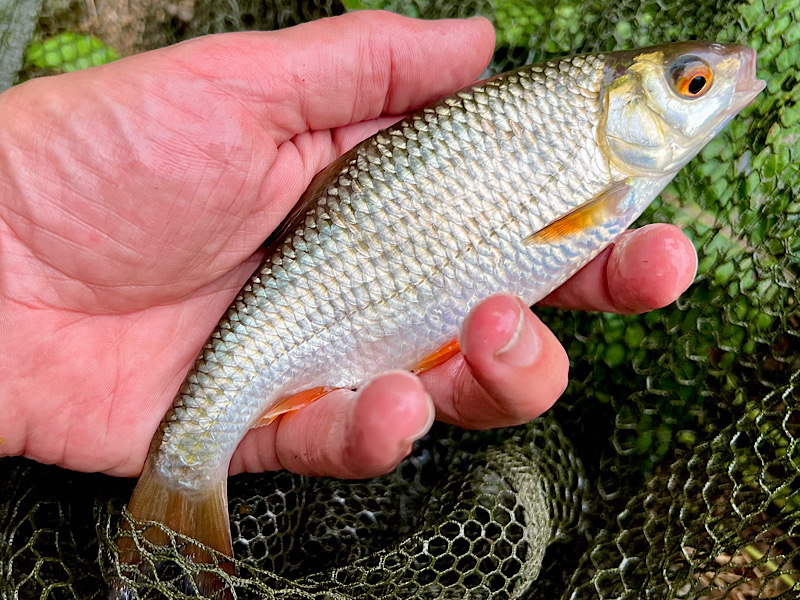 Once again time to move. At the far end of the beat is a large, slow, very shallow bend. I could see a large chub circling. Thought I’d spooked him, but kept low fed a few whites and he was circling mopping them all up. Back on with the TT, out she went with a small trickle of freebies and a tiny chub shot out from nowhere and took my hookbait! Got him unhooked and as luck would have it, the big boy was still there. Out with the float & freebies, round he came mopping them up. I could see his big white lips grab the hookbait (and me having a heart attack)… strike…yes! Off he went, near side, far side, left, right, eventually finding the net. 3lb 1oz 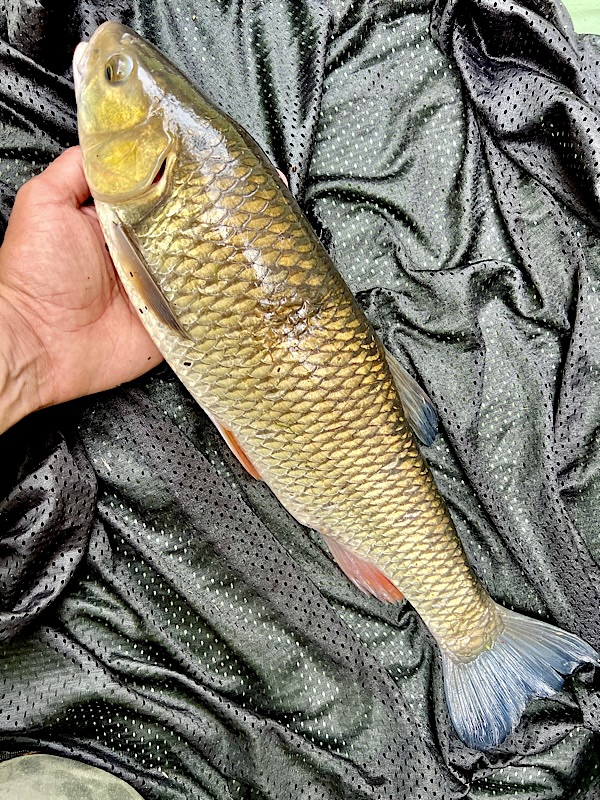 Now I was down to my last few scraps of bait and was knackered. Time for one last cast. All I had left was a few slices of white. Punch, waggler in a slack, bingo, a nice gonk 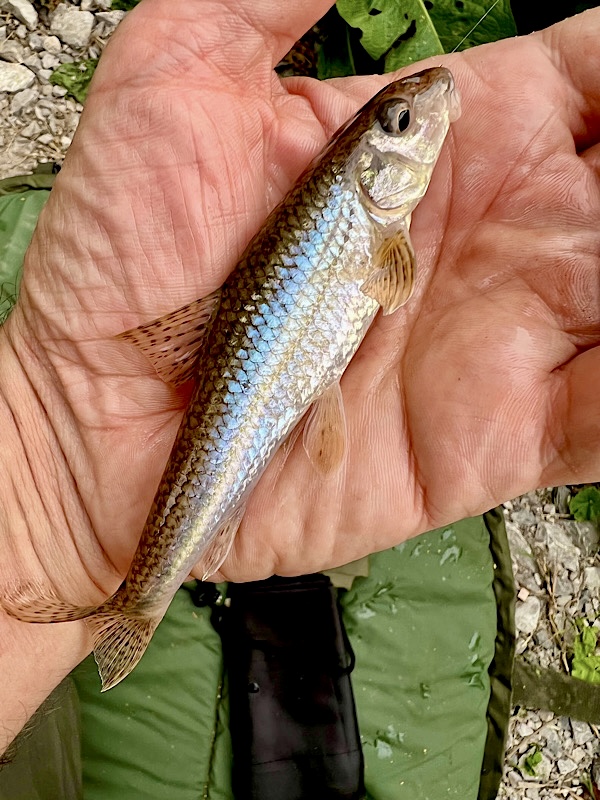 And that was it. Tired, sweaty, exhausted but all in all a cracking day. Train home. Beer. 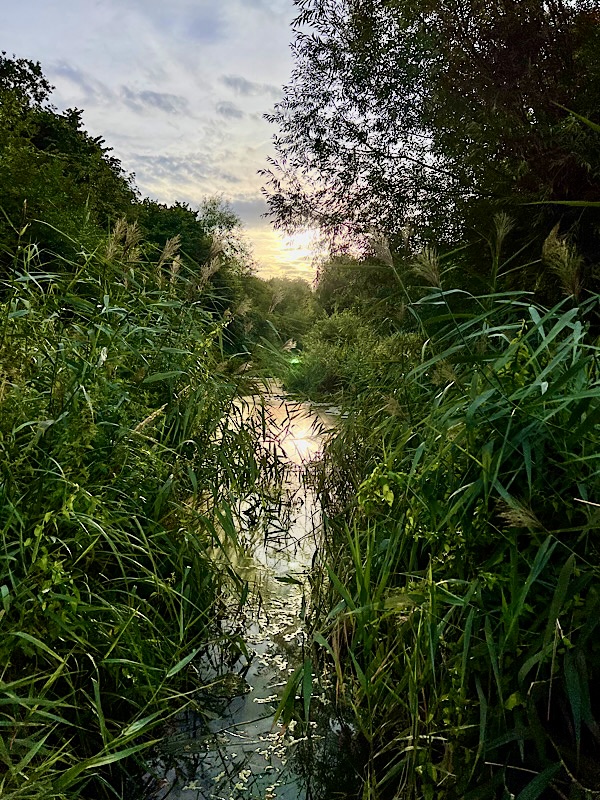 Another great report Daniel and some superb pictures.
Thanks for sharing what looks like it was a thoroughly enjoyable session.

Thanks for sharing that excellent day’s fishing. Some lovely pictures of quality fish. Excellent work

awesome, thanks for sharing
T

Cheers guys, much appreciated. Fishing last Saturday, Wed & Thur has finished me off. Feet up this weekend!

Plus you took an Accy home with the right number of pieces!

Just seen this one, great fishing.

Lovely spot. I thought the Lea was a big wide canalised river!
S

The Landlord said:
Lovely spot. I thought the Lea was a big wide canalised river!
Click to expand...

This will be the upper Lea. There has been a lot of time and effort put into trying to restore the natural river further up and now they are reaping the rewards. Hats off to the controlling clubs involved. Just goes to show there are ways of beating our best efforts to destroy everything.
Great days fishing aswell

Apologies for bending your ear qtaran but do you know anything about the fishing on Hertford common? LAA control the fishing and wondered about any Barbel through there

The Landlord said:
Lovely spot. I thought the Lea was a big wide canalised river!
Click to expand...

As @smiffy says this is the upper river, narrower and more meandering. Also sorry @smiffy I’ve never fished around Hertford, only the upper around Harpenden and Navigaton around Enfield, although I’m sure someone here can help.

I managed another afternoon back on the Lea today. Time to test the replacement Accy top section. I also wanted to test out the cut down bolo float mentioned in another post. It wasn’t for this stretch, but what the hell.

On the walk there I passed a huge elderberry tree so grabbed some for the roach. On arrival, the river looked good, much improved flow. I could see plenty of barbel & chub feeding but skittish. Would they take elderberry? Yep! A nice 5lb’er. The improved flow had also improved their fight. 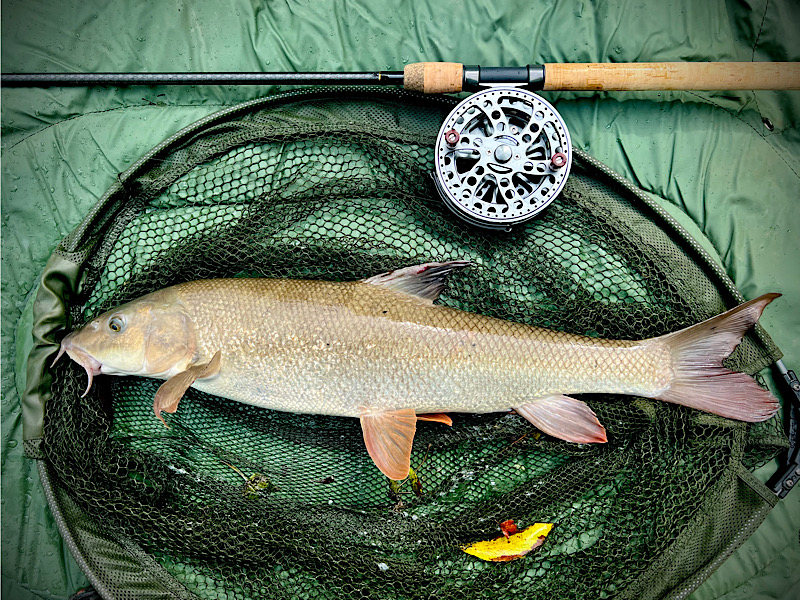 After a good rest he was back with his friends 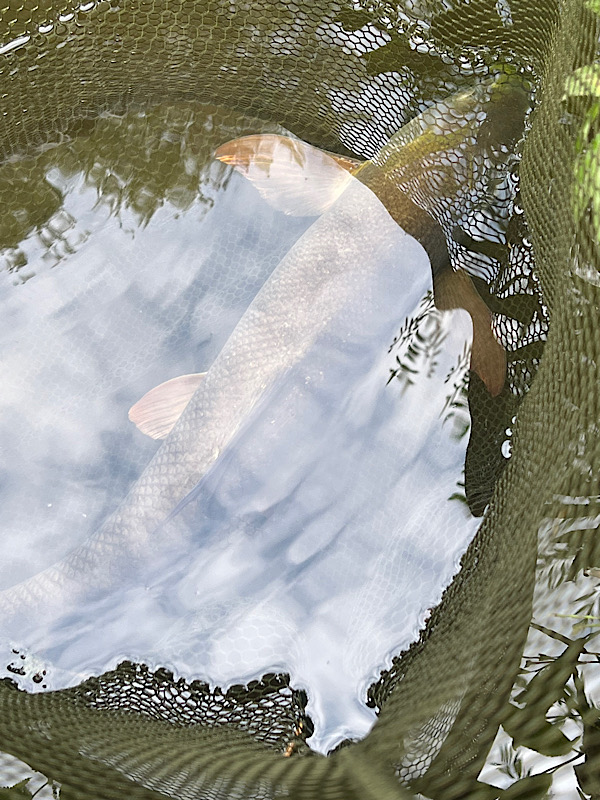 After exhausting the berries, switched over to pellet, still on the float. Another nice looking fish, 4 10. 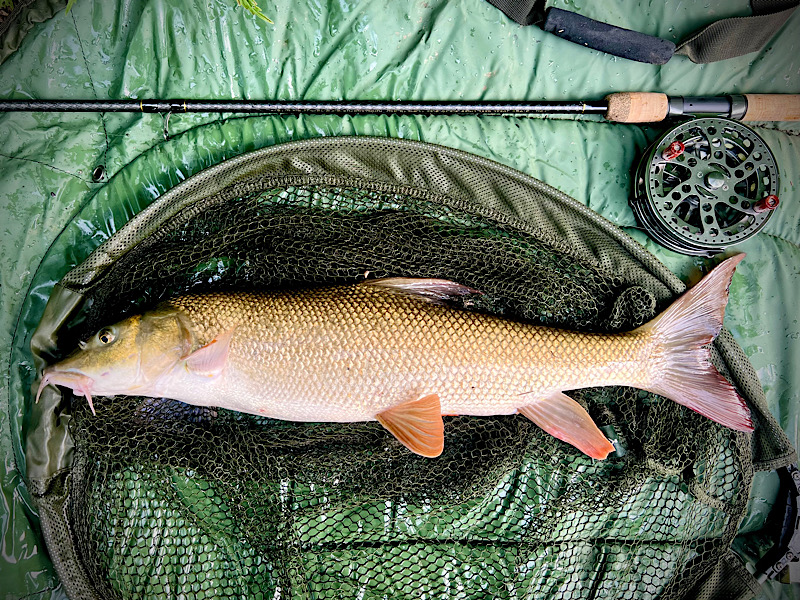 And so continued the day, 4 more barbel and a bunch of chublets. Only saw a few roach, nothing of any size. I did see a large chub (maybe 5lb) but he was way too wily for me. 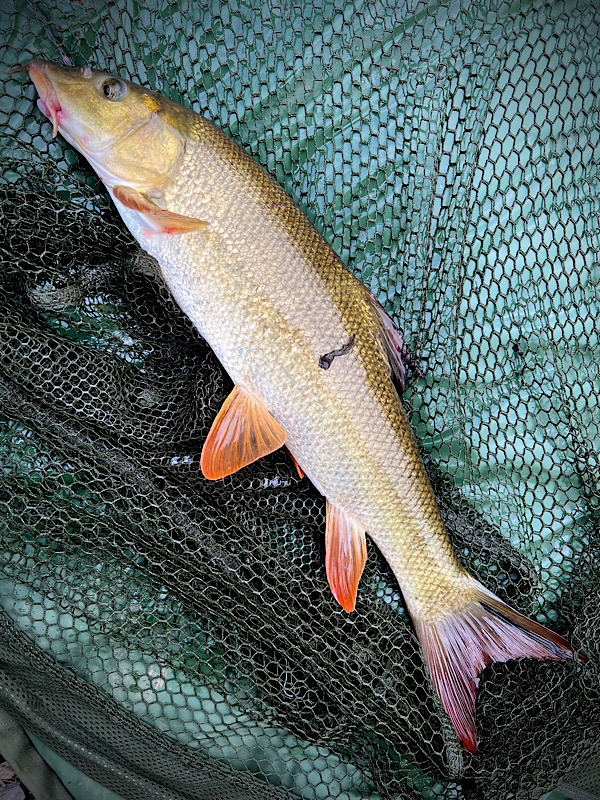 The cut down bolo was doing brilliantly until right at the end I hooked a small barbel (about 2lb) that took off like a rocket and the float caught on the overhang opposite. Winkled him out but the float had bit the dust. Hey ho. 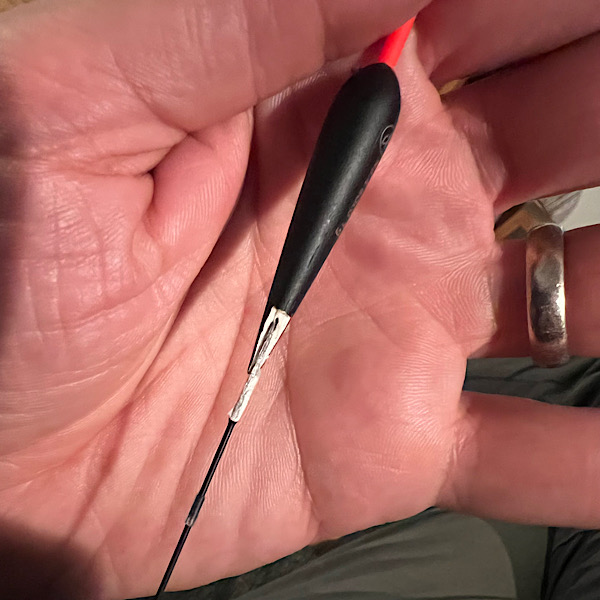 As for the rod, perfect . A contented walk back to the train and Friday fish & chips.