Environment Agency officers delivered a Christmas stocking with a difference as they released more than 13,000 fish into the River Great Ouse. 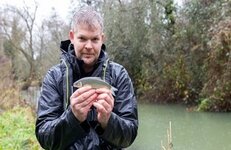 Alex Malcom, a fisheries officer, during the restocking on the Great Ouse.

The fisheries team recently undertook their annual trip to Calverton Fish Farm to collect fish and restock the river in and around Buckingham.
This was done over 4 days as part of a conservation programme and post-pollution recovery plan.
On the first day of the restocking, more than 1400 juvenile barbel were released into the upper reaches of the River Great Ouse in specific locations to suit habitat conditions, in a bid to protect and develop the species.
This is part of wider efforts to conserve barbel populations and improve vital habitat. 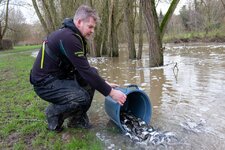 The fish being released into the Great Ouse.

Officers then released 5000 dace, 7000 roach and 1000 chub into the river to replenish stocks following a pollution incident in Brackley, Northamptonshire, in 2018, during which thousands of fish died.
Since the incident, the Environment Agency has released almost 28,000 fish back into the river. Further stocking at this location is planned for 2020.
As well as the fish stocking, other measures have been taken to restore the River Great Ouse, including habitat restoration work, such as gravel enhancement and cleaning, improving cover for foraging and resting up, and improved opportunities for fish passage.

Kye Jerrom, fisheries specialist for the Environment Agency in East Anglia, said: “All of these enhancements should give these fish and others in the system the help they need to thrive.
“We’re working with researchers, anglers, angling clubs and land owners to do this, and we know we couldn’t do this work without them.
“We are pleased that our restocking programme will hopefully give the river a new lease of life, but good fisheries management shouldn’t revolve around stocking.
“Our emphasis is on the restoration work that will create a self-sustaining fishery, improving the river in the long term for fish and wildlife.
“We look forward to the year when we’re not heading to Calverton to stock more barbel, safe in the knowledge that the river is doing its thing independently, and hopefully that isn’t too far away.” 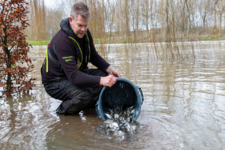 The restocking is part of our post-pollution plan.

On the final day, 900 crucian carp and 500 tench were delivered to 3 separate still waters in Cambridgeshire, Norfolk and Bedfordshire and will promote work with the Angling Trust to conserve crucian carp populations.
Mr Jerrom added: “Crucian carp are at risk from loss of pond habitat.
“Small ponds without resident stocks of carp were chosen for these introductions – they are also waters that are also dedicated coaching venues for new anglers too, so not only are we helping to conserve crucian carp, we’re helping to encourage more anglers too.”

Just bear this in mind when you pay for your rod licence.

Think the timing has been a couple weeks late. Those pictures don’t do justice to how flooded the Ouse is in those parts at the moment so it’s going to be a tough start for those fish.
S

RedhillPhil said:
Just bear this in mind when you pay for your rod licence.
Click to expand...

Shouldn’t the fines payed by the company that polluted the river cover the breeding,rearing and stocking of these fish? If it doesn’t then it should do. No way that anglers should be picking up the bill.

They almost certainly have. Thames Water paid for the re-stocking of the river Wandle after the release of a massive amount of chemicals that killed the entire river downstream of Beddington a few years ago.

Silverfisher said:
Think the timing has been a couple weeks late. Those pictures don’t do justice to how flooded the Ouse is in those parts at the moment so it’s going to be a tough start for those fish.
Click to expand...

What's the cormorant situation like down there Silverfish ? Do they stand a chance ? Tip those into our local reservoir and they wouldn't last until lunchtime.

I've never seen one myself and only occasionally hear about them so I don't think we have many. That's not to say there aren't any but if we had a problem with them then I'd surely have seen a few.

Fish stocking on the Lancaster Canal

Eels have arrived at the Great Ouse