After the histrionics of the Euros, it would be very rude not to go fishing today.

Trundled off to the Derwent at Howsham bridge after the school drop-off and wandered up above the weir/mill to a slow, deep glide. Only lasted 45mins, just didn't feel right. Back down below the weir (but not beyond the bridge) and a swim with somewhere to plonk the chair. Looked promising with some faster water cutting past overhanging trees on the far bank (it's also pretty deep on this stretch). Started off on open-ended feeder, maize/hemp-ish grounbait and two sweetcorn on a size 8 hook. Not much doing, but a small rattler on the rod tip and a 5oz dace had bitten off more than he could chew (no photo, sorry).

Switched to banded 14mm halibut pellet on the bomb, cast to the far side and catapulted three pouches of 8mm halibuts. Missed a rattle because I was enjoying the scenery, but 10mins later the rod gave a good old shake and I was in. Initial thoughts were chubby, but then the fight upscaled slightly and I realised it was probably a barbel.

Now, this was my second proper outing with my new Korum barbel rod, so I was suitably geared up for one. After a spirited scrap and coming too close for comfort to taking a dip, I managed to net the fella and scramble back up the bank for a quick weigh and photo. Beautiful creature, and the scales read a smidge under 5lb so let's just call it 7lb (kidding). Half an hour later hit a second barbel but the scoundrel managed to escape (next time Mr B, next time!)

Here's a pic of the fish- it's only my third from running water in four attempts (previous two went 3lb, 4lb) so let's hope they keep increasing in size 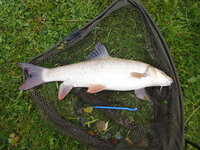 Glad you're getting a bend in the new rod. Lovely fish to do so with! Hope your success with the Barbel continues as sounds like you've cracked it already...

There's a few double figure barbel coming out of the Derwent, stick at it and I'm sure you will get one

Zerkalo said:
Glad you're getting a bend in the new rod. Lovely fish to do so with! Hope your success with the Barbel continues as sounds like you've cracked it already...
Click to expand...

It’s great fun, but not sure I’ve cracked it yet

What I have done is try to keep it simple in terms of bait and approach, but I’m still very green on things like watercraft. Not really anxious about that- quite happy to work at it for a long, long time.