After yesterday’s mostly fishless day, I still had the urge to feel a bend in the rod so I popped down to the local River Dearne. A short session, again with barbel in mind but also to be content with anything.

I arrived ready to fish at 7.45 and stopped by my favourite ‘barbel banker’ swim from last season. The overhanging were trees long gone and had been replaced with reeds and bushes. I don’t think I’ll find many barbel here again now their cover has gone. 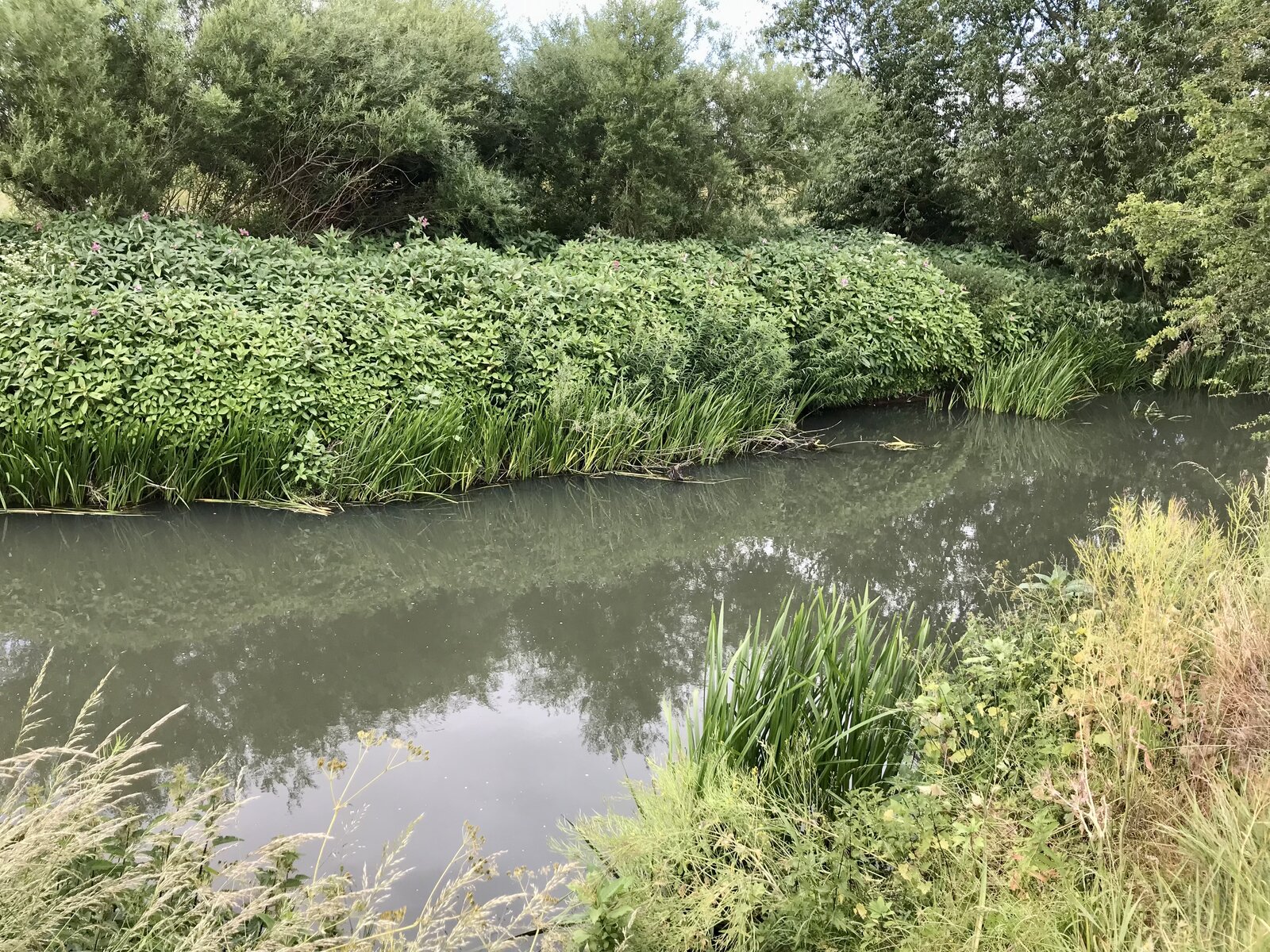 Worth a cast though, right? You never know what might be lurking under the steadily paced surface.
I did have three casts here, same set up as yesterday. The first chuck with a pva bag of mixed pellet, the second two with just loose feed. I gave myself 20 mins a cast and ended up with a lost chub that slipped the hook and a landed chub that didn’t… 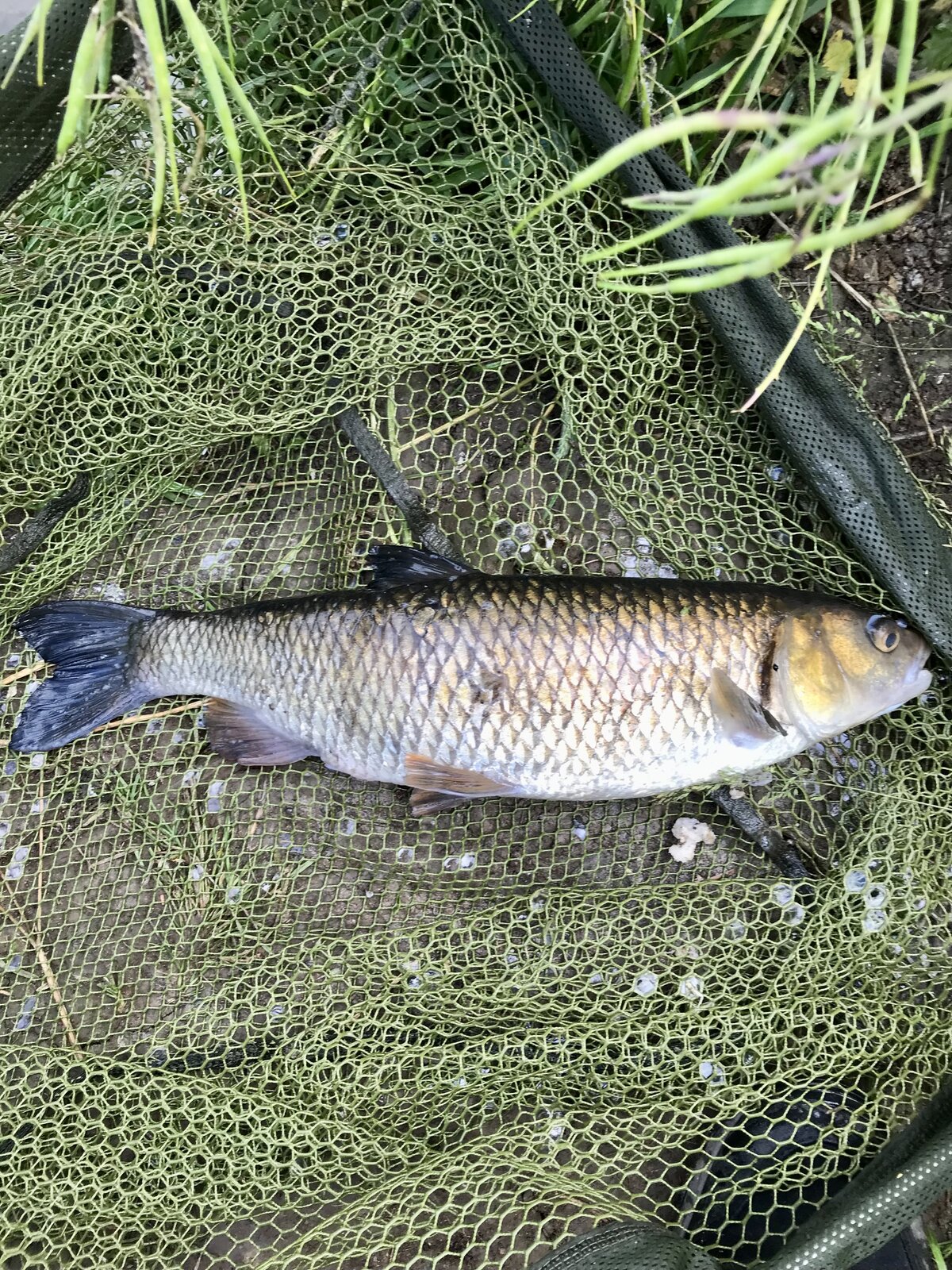 I decided to move on after an hour and headed down to the slightly deeper water below the footbridge. The river is looking really low and there’s long stretches that only look a foot deep. This time last year I was spotting shoals of bream, chub and carp with my polarising glasses. I haven’t seen a single fish in the shallows this year. 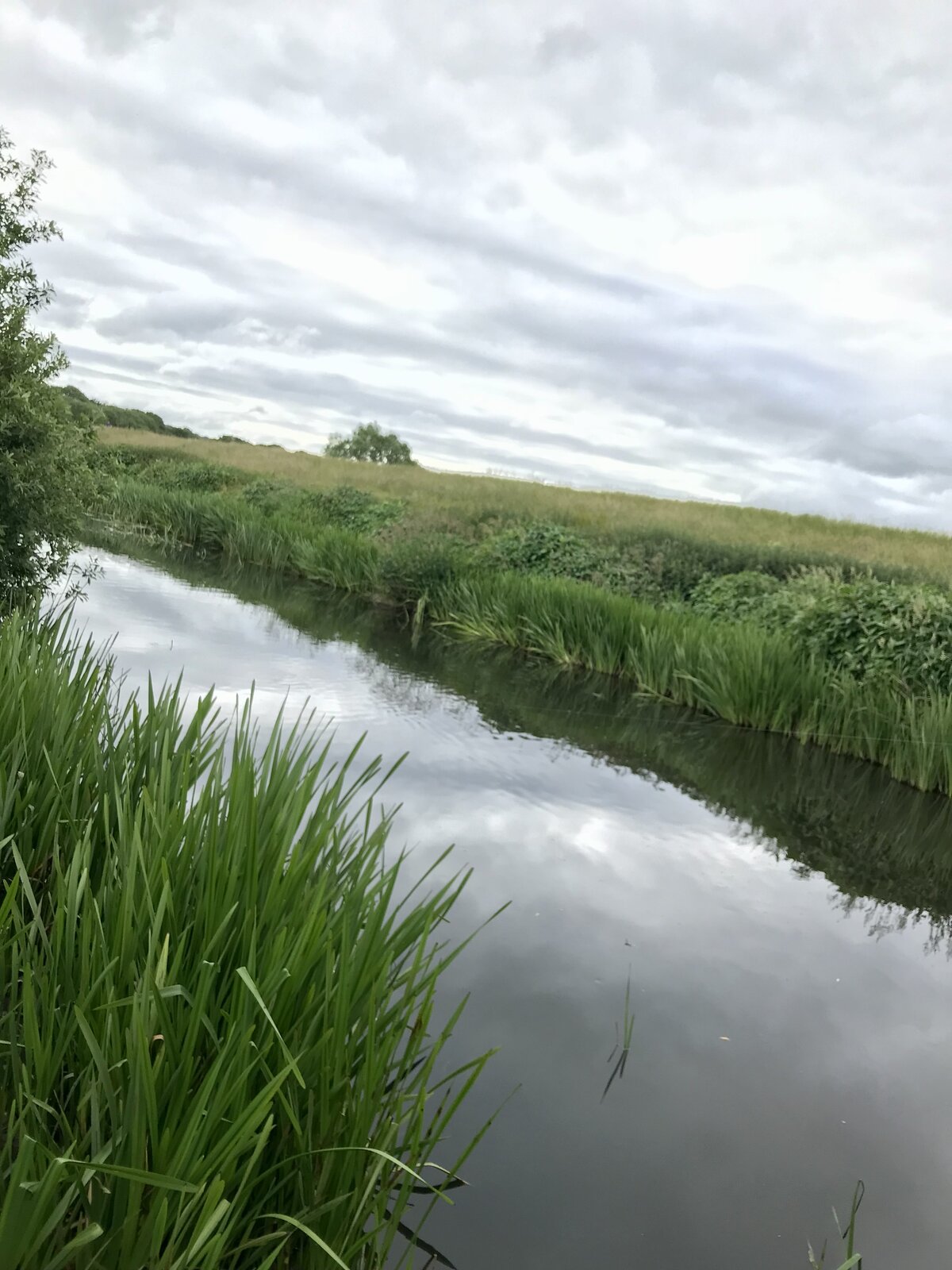 Same approach here, 8mm spicy sausage pellet hair-rigged to a size 12 Guru MWG, I started with a 3ft hooklength but reduced to 2ft after getting lots of plucks and taps on the tip. The bites weren’t developing into hook ups, as you can see here:

Would you hit that?

The shorter hook length made the difference, I had two chub from here between two and three pound. 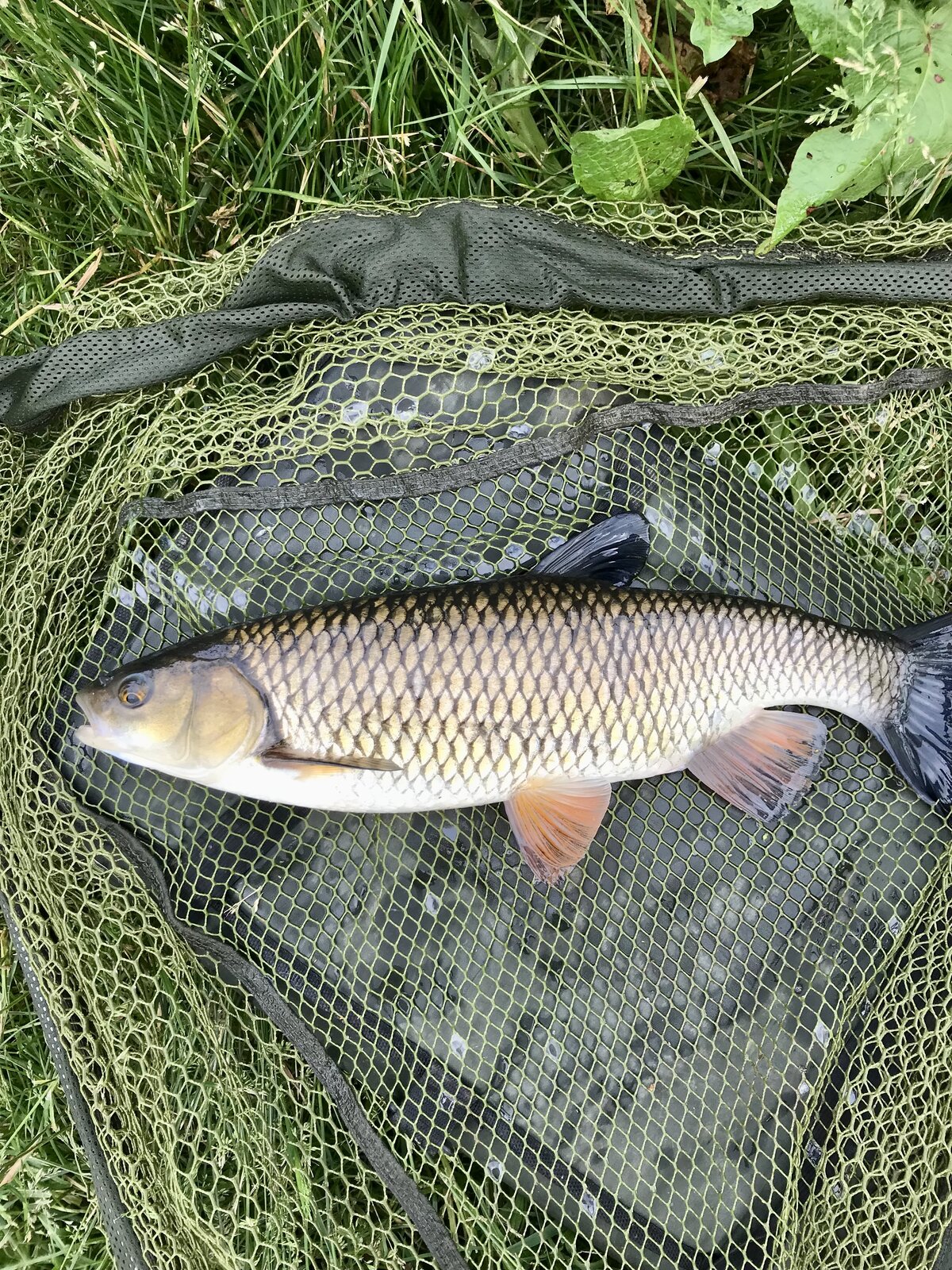 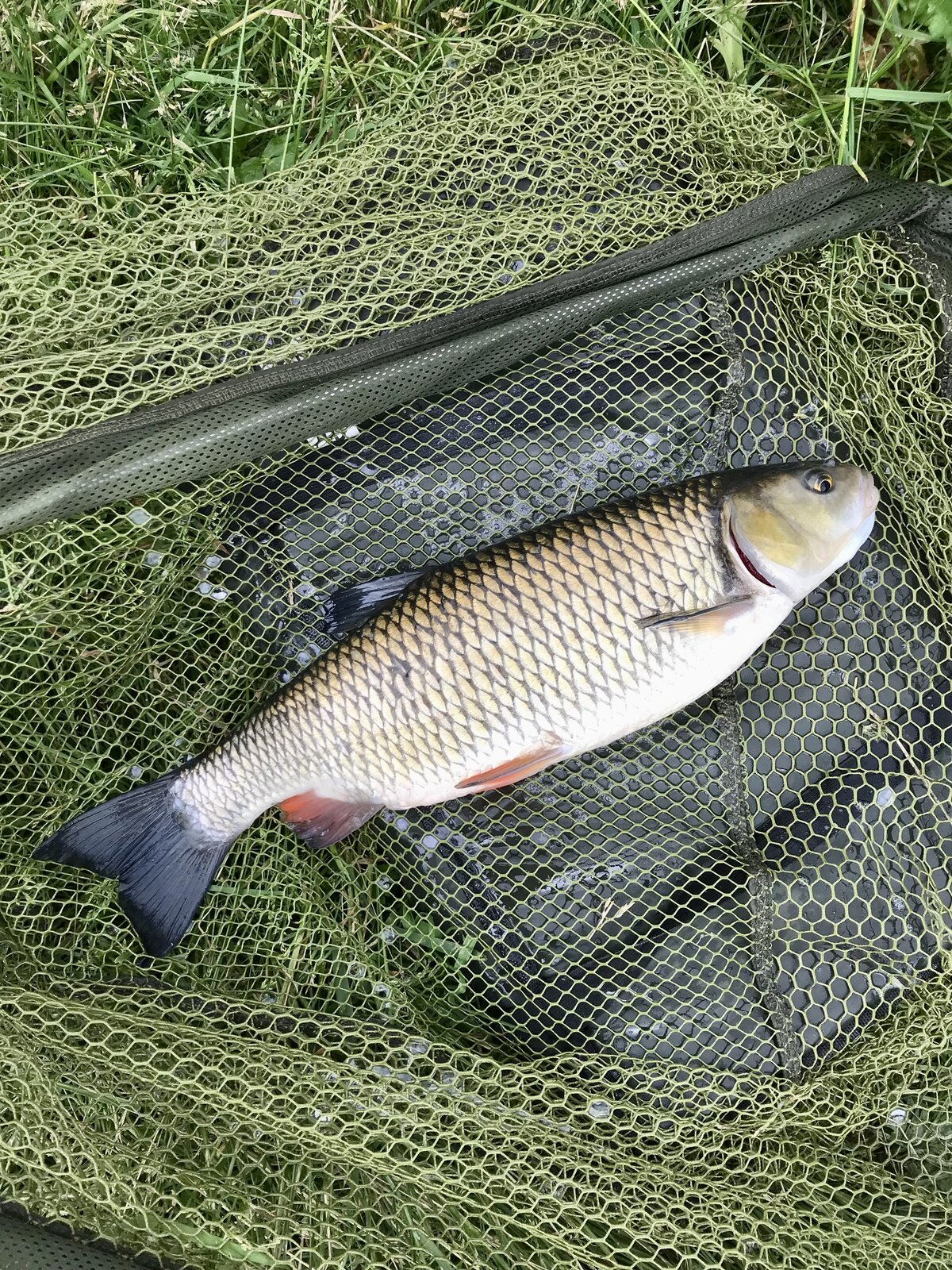 One was a slow steady pull, the other bolted downstream stripping line off the baitrunner. Nice to be into some action at last. The next bite was a fairly confident one, I assumed it was a chub for a few moments, only to be surprised to see this had taken the 8mm pellet. 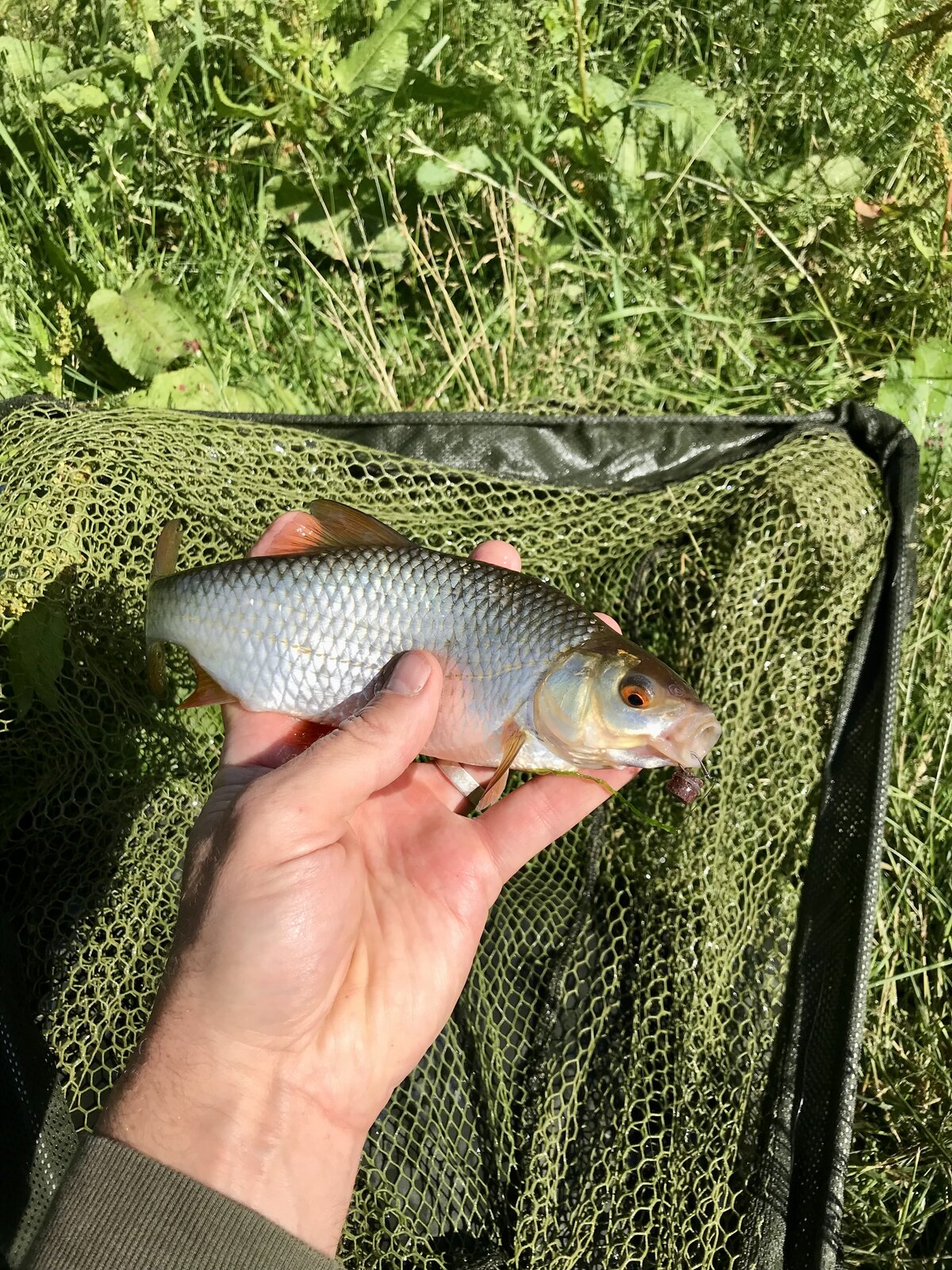 To be fair to the roach, it’s mouth was pretty much 8-10mm wide. I eat pizzas bigger than my head and nobody complains.

I wanted to be home by 11am, so I decided to have one last cast at 10.45. I set a timer for 7 minutes and started packing some bits away. With 2 minutes left the tip bent over and I was into my last fish. Alas not a barbel, nor a chub, it fought like a bream but wasn’t. I was very pleased to slip the net under what was my biggest ever Ide! I weighed it as it seemed really long, it was 4lb 4oz and a cracking fish to finish on. 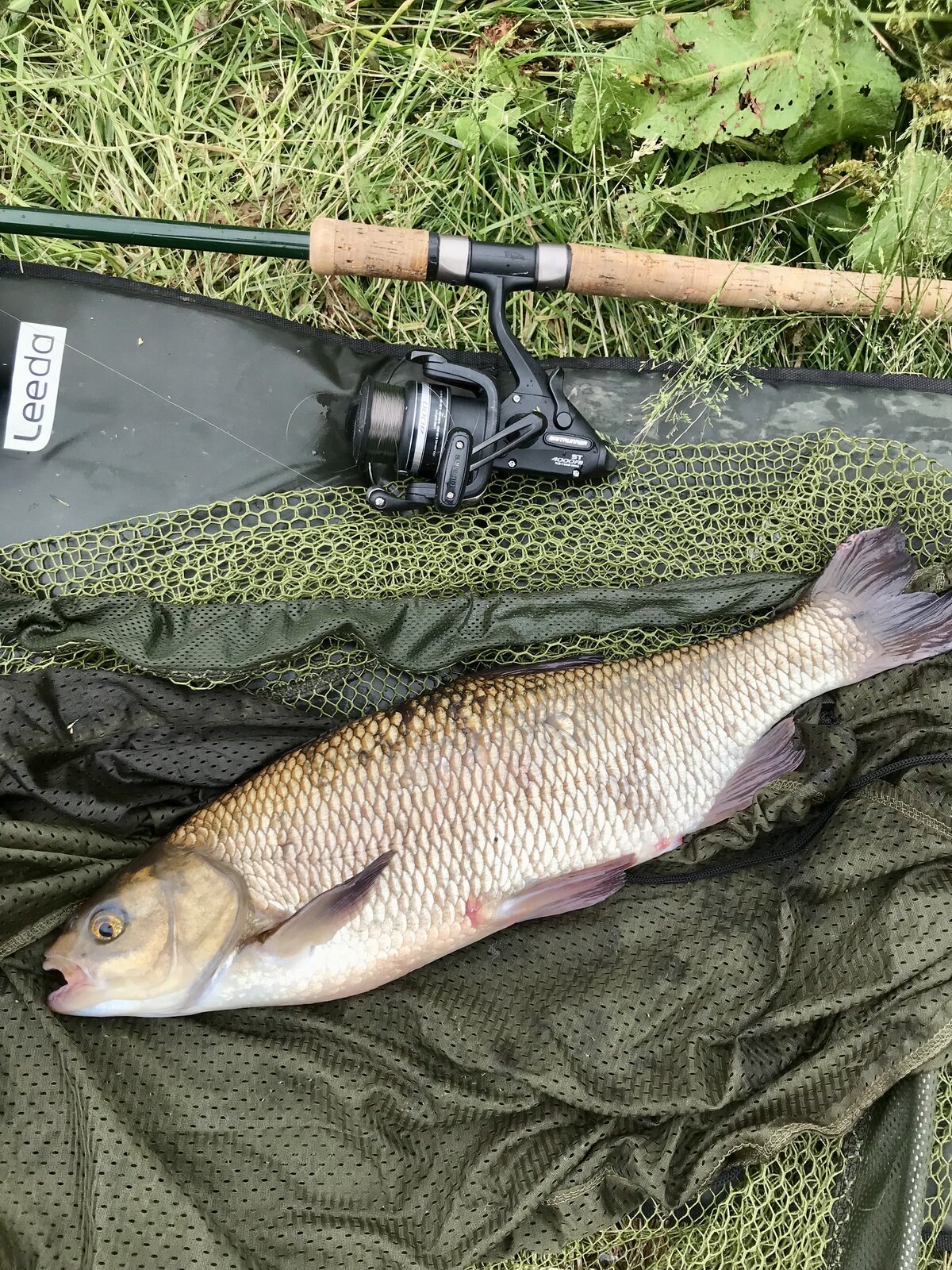 So a decent first trip to the Dearne. The barbel will be a whole new challenge now the landscape has changed but thats all part of the fun. I won’t be fishing it quite as much but I will look forward to every trip.

Some nice fish there and good to see you back on the Dearne, really enjoyed last season’s thread.

Good luck Adam! I only saw one other angler there so I don’t think it’s been hammered today.

qtaran111 said:
Some nice fish there and good to see you back on the Dearne, really enjoyed last season’s thread.
Click to expand...

Thanks mate, and me too, I’ve read it back a few times in the closed season. It’s nice to keep a record.

Well done Tim, a nice session to kick off a new Dearne thread.

Dropped into the deep hole swim for an hour. Cut a long and uneventful story short, blanked, few liners, got cold, went home.

Your old peg still attracts fish though Tim, a double came out of it last night.

The weather did take a turn last night, windy and chilly, which doesn’t help. Better luck next time.
Interesting to hear about the double, maybe they just like the deeper water there.

The elips pellets are apparently doing the business.

Great start to what should be a good thread. Can only hope the decimation of the trees doesn't prove too troublesome. I also try to film bites when I'm bored sometimes and get bites like that on the weir even on maggot with a short hooklength when the Chub are being cagey.

Zerkalo said:
Great start to what should be a good thread. Can only hope the decimation of the trees doesn't prove too troublesome. I also try to film bites when I'm bored sometimes and get bites like that on the weir even on maggot with a short hooklength when the Chub are being cagey.
Click to expand...

Cheers, I was wondering if I could catch a proper wrap around but no such luck. It’s hard to keep a steady camera when your instinct is to grab the rod! Those big plucks always make me think a chub has picked the bait up and dropped it after feeling the lead. I have struck at them before but never hit them.
C

Hi, lad's, new to this site and started taking up fishing again due to health problems, can anyone give me any advice on where to on the dearne.
I was on the river on 16th at Broomhill Road,,near pub, went over the bridge and then turned right, walked for about 10 minutes and found a nice place to fish, looked liked some one had been before with tins of lunch meat all over the place.
Any advice on where to fish would be very grateful.

Hi mate, welcome to the site!

To be honest I tend to stick to the adwick to pastures stretch purely because I’m familiar with it and it’s 2 mins from my house. There are some great fish to be had if you’re willing to put in the time and effort. @tincatim might be more of a help than me.

Crag Bamford said:
Hi, lad's, new to this site and started taking up fishing again due to health problems, can anyone give me any advice on where to on the dearne.
I was on the river on 16th at Broomhill Road,,near pub, went over the bridge and then turned right, walked for about 10 minutes and found a nice place to fish, looked liked some one had been before with tins of lunch meat all over the place.
Any advice on where to fish would be very grateful.
Click to expand...

There are fish throughout the Dearne, it’s always a matter of finding them and presenting your bait in the right way. Like Adam, I mostly fish the Adwick to Pastures stretch. It’s close for me and has some nice barbel, chub and bream amongst other species. What are you fishing for? You can catch plenty of silvers on maggot and stick float, trotting bread flake is good for chub, and chub and barbel on legered pellet or meat.

My advice on location would be to look for cover, overhanging trees and deeper holes. Anywhere where the fish are likely to feel safe to feed. Travel light and walk the river, trying likely looking swims for 30 minutes. It’s a learning curve, but stick with it and you’ll get a great sense of satisfaction when you finally land that big fish.

Does that help? Feel free to ask if you want to know more.
M

Where abouts on the dearne do you fish .....nice post btw

Mostly around Adwick and Harlington, but also down to Pastures and up stream around Broomhill and Darfield occasionally. There’s plenty to go at.

I went for a few hours after work on Monday. I wasn’t going to write a report as it wasn’t a great session, but I feel that it’s good to show the river in it’s true light. It’s a brilliant little river with some fantastic fish in, and to a good size. But it also attracts a lot of idiots.

Monday night started off with me heading to my favourite swim only to find a couple of lads already setting up there. I dropped in 60 yds upstream of them and starting feeding a likely looking spot under a tree. Not five minutes later, I look up and the tree next to them in that peg is on fire. Yep, big orange flames licking the sky

I gestured over in a ‘WTF are you doing’ kind of way, they were stood around looking useless so I ran over to ask what had happened. “We don’t know how it happened” came the reply. Apparently trees can self-combust.

One of them had a bottle water so I told him to pour it on. I luckily found a full bottle of pop nearby so poured that on too, then filled it a few times with river water and managed to put the fire out before it did any major damage. The tree and grass left charred and smoking as they asked whether it’s still worth fishing the peg

Before I walked off I looked down to notice a rifle and a dead pigeon. Lovely.

I deceived to move off downstream and find somewhere quieter. This peg being about the best looking one. 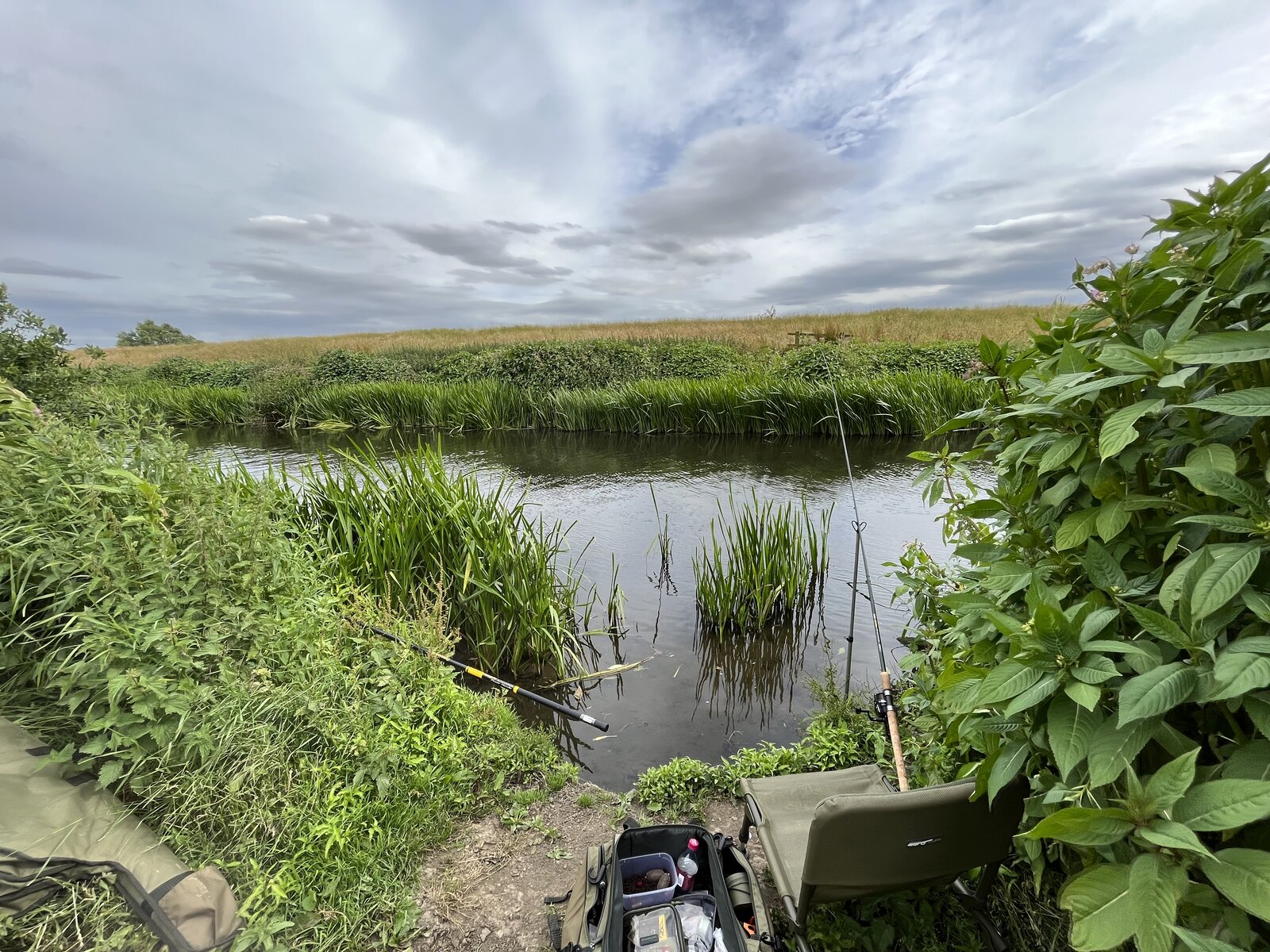 I had one chub from here that took some getting out as it smashed its way through the near side reeds. A nice chunky chevin of 3lb 9oz. 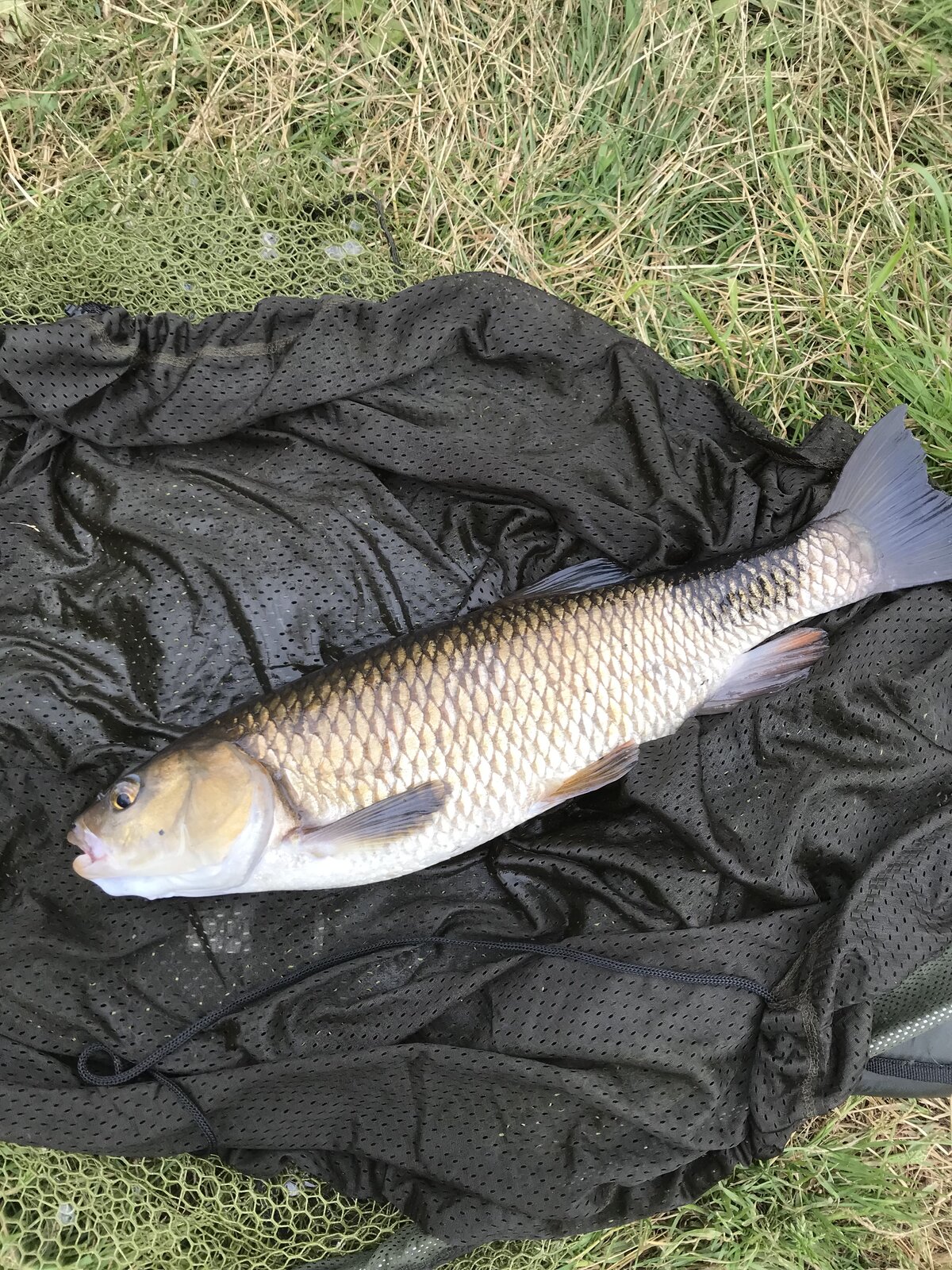 No more bites were forthcoming and the wind was making things difficult so I headed back upstream with the aim of dropping in somewhere else for half an hour. Unfortunately that never happened. This was 8pm and seemingly the time where the night fishers/stoners/wasters come out to make a mess. The air smelt green and most spots were occupied.

I stopped by the two fire starters to see that they’d plucked and filleted the pigeon and were cooking it’s breast in a luncheon meat tin, over an open fire. “Did this one start by itself as well?” I asked as I walked past. I declined their kind offer to try some and went home.

On the plus side, I did spot a few barbel. But there was no way they would feed confidently with the bankside circus in town.
J

Is that the Harrington/Adwick stretch by any chance? It sure sounds like it

Yep, it can be a bit like the wild west sometimes.

Especially during summer months it gets a bit dodgy down there. Come September/October they’re nowhere to be seen. Belting chub that though mate!