Donny Pete said:
The same could be said about the Don and Rother, the local rivers were like open sewers back then.
Click to expand...

. I can remember when the Dearne ran orange. What pollution was that I wonder ?

. I can remember when the Dearne ran orange. What pollution was that I wonder ?

tipitinmick said:
Do you know a lad called Russ who fishes it mate ? He’s my dads postman. He’s always on there somewhere hunting for Barbel. He does some nice videos of the Dearne on YouTube. Lovely lad.

Russ is taking a break from fishing due to illness

Stu said:
Russ is taking a break from fishing due to illness
Click to expand...

Yes. My dad said that Russ was going into hospital to have an operation. I’ll not say too much on here but, it’s to do with the C word.

I know Mick. I know Russ

Yes. It looked like a red ochre type colour. I know it stained the river bed for years. That can’t have been good for the wildlife can it.

Sad isn’t it but, he’ll pull through. If you’re gonna get it it’s the most treatable C in men and it’s extremely slow growing in most instances so, they can normally see to it. A friend of my misses dad has had it for 30+ years. It’s never spread so they’ve left it.

Had another session on the Dearne this morning, the weather forecast rain all day but having a few days off work, I thought I’d get out and see what’s happening.

The plan was to fish for barbel (as it usually is) but be happy with anything. The river had a fair bit of extra water on and was still rising after the rain last night. This made it difficult to hold bottom with 2oz, and my usual swims were either inaccessible or towing through. So today I spent some time searching out the slack water, trying to find some fish holding areas. Bait was 8mm spicy sausage pellet wrapped in marine halibut paste, with loosefed 8 and 6mm pellets.

As I mentioned, the river was rising and there was a lot of debris coming down river. Weed, reeds, branches, logs, a football, a flipflop… then whatever the f&£k this is? 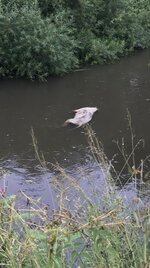 I’m gonna say it was a dead pig, not exactly what I was after

I found a decent swim next to a storm drain, and set about fishing it. First fish had me convinced it was a barbel, it took off in the current and put up a hell of a fight. If I described the fight, nobody would believe it was from a bream. A decent one though at just over 5lb. 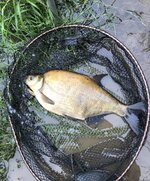 I had another two bream from that swim, just fishing a few foot from the bank. 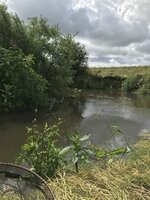 The weather wasn’t all that bad in the end, a few showers, a bit of sun, I’ve had worse days. I tried another four or five swims over the next few hours, with just one more bream to show for it. 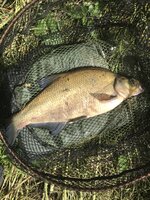 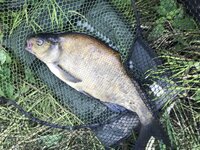 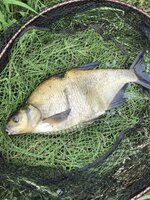 The chub were noticeably absent today, it’s rare that I don’t have at least one down there. But a day off work, catching river bream is fine by me.

Nice bream those mate! Whereabouts were you? That doesn’t look familiar

AdamRussell93 said:
Nice bream those mate! Whereabouts were you? That doesn’t look familiar
Click to expand...

Upstream from the footbridge, but on the Mill Lane side. If you’re walking up river from the opposite side you’ll see the storm drain, that was just to the left of where I fished. It had flooded right up to the water outlet gate, so figured there’d be some fish there trying to escape the flow (and dead pigs).

I think I’ve fished that side probably 3 times, will definitely give it a try in future as I like the look of that bend!

Really appreciating the time off work this week, got all my jobs done at home before the football yesterday, so this morning it was back to the Dearne for another session. And a what a session it was!

The river was almost back to pre-rain levels, just a few inches on and a nice tinge of colour. I arrived ready to fish around 7.30am. The best thing about fishing here in the mornings is you rarely see anybody else fishing, let alone the black can drinking chavs.

I threw a handful of spicy sausage pellets into the first swim. Then went for a walk upstream to see if I could see any fish. Nothing showing so back into my spot and out with the lead and banded 8mm pellet. 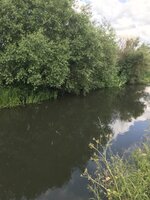 Second cast resulted in a nice chub of 3lb 8oz. 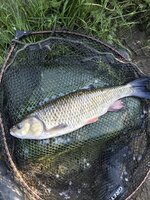 It went quiet after that, I put a pva bag of mixed pellets in with each cast and left it for up to 30 mins each time.

On about the fifth cast, the tip hooped over and I was into another fish. A powerful fish that hugged the bottom, I eventually got it up and was pleased to see a beautiful barbel! It weighed in exactly 5lb, not a monster but a perfect looking fish. 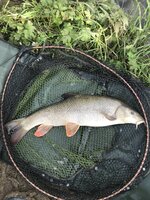 I had one more chub from there before wandering off downstream to try my luck elsewhere. I spent two hours in a lovely looking swim down from the footbridge, one bite, one chub. It’s deeper and slower here, with plenty of overhanging trees. 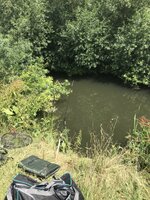 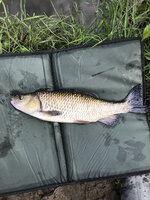 Around 1pm, I decided to head back up to the car. I thought I’d try another hour in the first swim on the way. Glad I did, as I had another chub of about 2lb, followed by the exciting three foot twitch from another barbel.

This one put up an admirable scrap. Took a while to land, and I could probably do with a bigger landing net as I struggled to get it in the first time. Another perfect fish weighing in at 7lb 6oz. 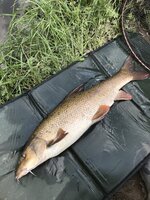 I gave this one a good 5 min rest in the net, before letting it swim away.

And that was that.

I’ve really enjoyed getting to know this little river, it’s been a good few sessions. But I feel like I should give it, and it’s fish, a rest for a while now. So I’ll probably head to a lake tomorrow.

I’ll feel a little short changed paying £6 for a day ticket, after so much quality free fishing!

Small river with quality fish! Love it! Great angling and reports coming in from here.

Zerkalo said:
Small river with quality fish! Love it! Great angling and reports coming in from here.
Click to expand...

Cheers mate. I’m glad you like reading the reports, I like writing them as it gives me something to look back over when I’m struggling. Need to get @AdamRussell93 on the barbel now

Fantastic stuff, really makes me want to get out on the bank.

I’m not jealous. Honestly.
Excellent stuff mate though, absolutely buzzing for you! 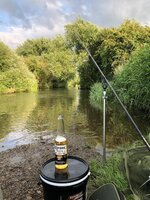 Cheeky corona and a few casts resulted in a lovely chub about 3lb. Same approach as last time, micros, hemp and groundbait but a 3FT squid and garlic boilie on the hair this time. 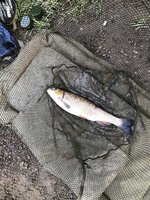 Nice one, that looks an idyllic scene with the Corona. A 3lb chub with just a few casts is a good result. I’ve only been catching four or five fish in a full day and can easily go two hours without a bite.

tincatim said:
Nice one, that looks an idyllic scene with the Corona. A 3lb chub with just a few casts is a good result. I’ve only been catching four or five fish in a full day and can easily go two hours without a bite.
Click to expand...

Starting to fall back in love with this river again. It battered my confidence for months. But over the winter, just researched and walked the river and methods and over 3 sessions I’ve managed a few lovely fish. Just want this barbel now!

Difficult day today in comparison to my previous sessions.
Decided to take my son with me today for his first river session. Last thing I said to him when we unloaded the truck was ‘Don’t be disappointed if we don’t catch, you’ll get used to it on here’.
I didn’t want to upset him but at the same time I didn’t want him to expect the fast and frantic action he loves at nearby barnburgh lakes.
(Before we start, I may or may not have taken pictures of swims, wholly down to me being a forgetful tw@)
The first swim was the same one @tincatim fished the other day. Same approach I always take, feeder as light as I can get away with, groundbait, micro pellets and hemp. 1.5 ft hooklength to a 14 with a hair. 8mm halibut to start. Nothing more than a few pulls. Jacob at this point is getting twitchy and wanting to catch so we upped sticks and moved after half hour and 2 casts.
Further upstream we found a lovely looking slack surrounded by trees, so in went another feeder load and we sat twiddling our thumbs. 4 recasts just to keep bait going in hopefully drawing at least something out. Nothing more than rattles. By this point I’d noticed the peg next door had a lovely looking crease with lots of smaller fish showing. So we moved 30 yards further upstream. Then as soon as I had loaded the feeder up, we both saw a barbel roll. I was more excited than Jacob but no sign of interest from anything. By this point I’d upped pellet size to a 12mm.
We decided after an hour of this that we weren’t going to catch anything from here so Jacob wanted to try and cast at the tree line from the previous swim. So we did. And to be fair to him…… 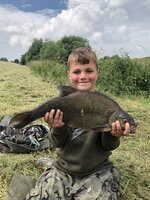 A lovely bream! Jacobs first! As soon as we put it back he looked at me and sighed ‘it’s not a chub though dad’.
Now I explained to him that a bream that size is no fish to be sniffed at, but also made me aware how much he wanted a chub. So I tried every trick I know. Different hook sizes and hook lengths, numerous swims to no avail.
I don’t know what it was today, whether the bright conditions was an issue or not, but @tincatim does well through the day as I usually come down at dusk.
Im coming back down by myself Monday night, and this time, it’s personal.
(Sorry for the long report with not much action)

That's a cracking bream and a lovely report keep them coming both of you I've enjoyed reading all of them.