I have just finished two weeks on the Bann and it was very different to what was the normal.
First thing was that due to a very dry summer the lock gates at Toome below Lough Neagh have been closed for months so right on que it piffed down for a few days before we got there and the gates opened a bit bringing weed and sediment down the river in huge quantities.
Unlike most rivers the extra flow and colour ruins it but we thought it would clear up but no ....all day and night it chucked it down they had to open the gates wider to reduce the levels of the Lough as its regulated to prevent the land flooding around it.
Now it was a case of 60g feeders and flat floats 20g and more but the rain kept coming and it was a struggle, best weights of Roach and Perch 4/5 kilo but sections were won with a kilo.
Finally the river was full of Trout which dont count of course, in one section of 8 anglers over 75 were caught in one match.
Still a great two weeks even though the fishing was dire some great banter was had, the traditional pound a man for the best weight in the section was paid out to the winner in copper and 5 or 10p's on one day
Still booked for next year though 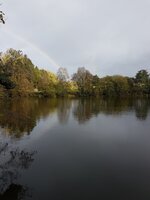 I remember fishing the dumps stretch in the 80s and weighing in 120lbs of Roach. How times change.
G

I remember my first view of the Bann in 1980 covering a Shakespeare V Midland match when one angler weighed in 100 lb of roach and was beaten both sides! It was that match which started my love-in with Ireland.

Getting on for 40 years since I fished it… had 105 lb of roach once after going the first 90 mins of the (5 hour) match without a bite.
Take top section out, whip loop of 30 lb nylon with a snap swivel in it to the end of the no2 section, rig with an three quarter inch barrel lead rather than an Olivette and a long shanked size 12 fly hook with six maggots on it….
Happy days

Yep that was how we fished it, 6 maggots on the hook and swinging in a Roach a chuck averaging 1lbs to 2 lbs. Big avon float and barrel lead. Nothing subtle about it but great fun.

The bann fishes a lot better after a few frosts,then the fish out of loch beg move into the river. Baz smith used to run a shop trip the week before the bann bonanza, some of the best fishing for roach,bream and big hybrids on pole or double hook feeder rigs. HAPPY DAYS.